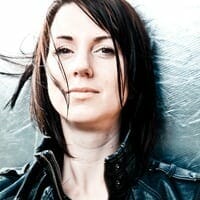 [quote style=”boxed”]Take the next step and do it. It depends on the idea, but I was talking with friends the other night and it’s 100% true that everyone has million dollar ideas, but very few people act on them. [/quote]

Tara ‘missrogue’ Hunt has spent her adult life online. She was part of the social web before they needed to say it was ‘social’ and is one of the pioneers of what is now known as ‘social media’ (though she’d never call herself a social media anything). She cofounded Buyosphere in 2010, an online tool to help people gather their buying history and use it for better shopping personalization. She believes strongly in personal data and putting the human at the center of technology. Fast Company called her one of the most influential women in technology and one of the 25 women-led startups to watch. She is a digital nomad currently living in Montreal with her dog, Ridley and boyfriend Carlos and has a grown son, Tad, who keeps her honest.

Well, most of my day is spent thinking about or trying to find money to feed my employees at Buyosphere. Many people don’t know this, but being a CEO is not about being the boss. It’s about being the main person responsible for keeping the company going. That’s it. It’s your job to make sure the company survives and (then eventually) thrives financially. And it’s a full-time focus. If someone had told me that when I started this, I may have thought twice. 😉

I usually have either 2-3 pitch meetings or potential partnership meetings on the phone or in person. All the time in between those meetings is spent looking for more pitch meetings, partnerships or following up with users. I also try to fit in some blogging/tweeting about our progress to keep us looking busy. I wish I had more time to focus on product, but I have a great team that I trust 100%. They are doing an amazing job.

Whether it’s tools like Runkeeper and Fitbit that allow me to track my fitness and health or the type of stuff that we are doing with Buyosphere that will help you understand your buying patterns, this data in the hands of individuals will become more and more valuable as time goes on. There is a real opportunity for personal mashups and tracking in the future, too. A company called Sing.ly is creating a virtual personal data locker that will have some seriously cool developer APIs available.

This is inherently connected to the personal data movement and what makes mobile technology so darned cool. I actually long for the day when my eyes work like Terminator’s eyes and can scan rooms and get more information augmented from the web about the location, objects and even people. I don’t think this is so far off, actually. There are apps that are starting to do a good job of this. All we need are contact lenses that display the results!

I’m in love with companies like AirBnB, GetAround, RenttheRunway, Neighborgoods and BIXI. Shared resources have long been in the realm of hippie-dom but are now more acceptable for everyone and make sense for us as we move forward and try to sustain our planet (and our budgets). Tools that emerge and allow for this make me excited about the future. We definitely want to build in collaborative consumption to Buyosphere as well.

Take the next step and do it. It depends on the idea, but I was talking with friends the other night and it’s 100% true that everyone has million dollar ideas, but very few people act on them. Set the wheels in motion. Research the market. Look into patents. Talk to potential partners. Even just sketch it out. Next thing you know, you’ll be far enough down the execution path that you can’t turn back.

People who do. When I’m feeling lazy and uninspired, I surround myself with people who push themselves to stop talking and start doing. Then I feel pressured into getting off my own duff.

Overspending. When I started my first company, I got a big line of credit and a business loan and decided I needed to “Fake it until I make it”. I paid for a fancy website, brochures, cards, etc. It was just a consulting firm! I didn’t need to put all of that money out. Yet, I did and then paid for it when the industry took a nosedive in 2002/03. I struggled with that debt for years. Now I don’t spend money unless it’s absolutely necessary. I’m much smarter with my money and how I ‘fake it’ now. Actually, I prefer to be proudly small and scrappy. 😛

I’ve been thinking of a better way to help authors democratize their promotion process especially since we are seeing such great success on the Kindle store. There is something there and it’s in the mobile space.

The New York Times. Because it keeps my brain multi-disciplinary. I try not to focus on Startup this and that. It puts me in a vacuum of knowledge that is bad for my brain.

One book? Egad. That’s impossible! Probably Matt Ridley’s The Origin of Virtue. It’s amazing (I named my dog Ridley because it was such a big influence on my thinking). He talks about why people cooperate, collaborate and share even though it doesn’t make ‘economic sense’. It really explains what emerged on the web with the social stuff. People are selfish, sure, but we really are programmed to collaborate. It’s in our best interest of survival.

Jeffrey Zeldman (@zeldman) because he’s brilliant AND hilarious.
Cindy Gallop (@cindygallop) because she reads and filters so much and has one of the most fascinating lives of anyone I know.
Kristina Halvorson (@halvorson) because she talks about the importance of content and lives it.

Kathy Sierra. It’s been too long since the world heard from her. I miss her wisdom.

About 10 minutes ago. My boyfriend, Carlos, makes me laugh out loud constantly. I can’t even remember the joke. Something about my disastrous attempt at promoting my blog (I’m bad at it). I think he was imitating me being passive about it.

If you were to leave the web startup world tomorrow, what would you do?

What is more important to you now? Love or greatness?

This has changed for me in 2011. I don’t think I understood love before and could only grasp the importance of greatness (changing the world). Now I think love changes the world. So I would say Love is more important to me now.