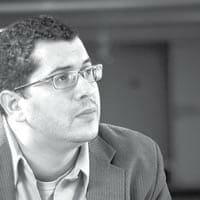 [quote style=”boxed”]By listening, doing it as soon as possible and getting feedback from customers and stakeholders. Then listening some more. [/quote]

Joshua Hernandez has been starting companies or participating in start-ups since he arrived to Chicago from Puerto Rico in 1996. “My first start-up was making comic books with my friends in high school.”

In 1999 Joshua founded SectionZ.com a peer-to-peer musicians community branded the “Original Electronic Music Underground” where musicians would swap music projects with each other, collaborate and review iterations. Over time the quality of the community spawned SectionZ Records and helped launch the careers of some very well known electronic musicians including Deadmau5.

Following his passion for games, in 2006 Joshua launched a PlayStation 3 and Wii gamer ID card service called TripleTags, which at its peek catered custom gamer cards to over 2.5M gamers around the world.

Right now I am making sure our product gets into the hands of as many advertisers and developers as I can before we make some key announcements around Tap.Me. Besides that I am ensuring that our in-game engagement engine works with and without real world rewards so that we can accommodate advertisers of all shapes and sizes.

My day usually starts with dropping off my son to pre-school and negotiating what video game he will be allowed to play if he behaves. It’s great business development practice at 7AM.

Then I check Twitter, Email and catch up on Google Reader while riding the train to figure out if the world is going in a direction we can leverage that day.

Once I hit the office I pull up my weekly goals and start cranking on it, stopped only by business development calls, an occasional game, or the latest Epic Mealtime video. We love to have fun at Tap.Me and it’s a bonus that we get to play games to show developers how our platform will work with their game systems.

My workday will usually involve some sort of design or prototyping of product based on what we are hearing back from game developers or advertisers.

The democratization of game development, game mechanics on everything, and generation-touch.

By listening, doing it as soon as possible and getting feedback from customers and stakeholders. Then listening some more. With Tap.Me, we took an early alpha to the Game Developers Conference in 2010. Back then our core product was interactive achievements which we killed after developers and users pretty much told us to do it and our product is much stronger now because we listened, as hard as that was at times.

I love watching people have epiphanies and doing everything in my power to enable that to happen.

Waiting. Waiting to launch, waiting to speak my mind. Waiting for someone else to take care of something that I knew I should have taken care of myself; but most importantly, waiting to delegate. I learned that although there might be a right time for everything, the sooner you learn the sooner you can do things better.

This one is going to sound crazy but fuck it: With every bit of a persons life being stored in some digital format how cool would it be if we could create AI around all of that data to train you on how to approach a sensitive personal situation. Creepy I know, but we have the technology. Remember when Peter Molyneux demoed Milo at E3 2009? ), just imagine if Milo was that pesky girlfriend you have tried to break up with for the last two years and just never found the courage or simply the right words that would lead to an amicable outcome. What’s worse is you usually only get one try at it. What if you could talk to the virtual version and experiment with the outcome? Maybe you might find that breaking up was not what you wanted.

SpaceRef.com. I am obsessed with getting off of this rock and although I know it probably won’t happen in my lifetime, I love to see where we might go. I consider all other daily reading a part of the process, but I read about space daily. Spacememe on Flipboard rules.

Another huge favorite is Daniel Cook’s Lost Garden Blog, http://lostgarden.com that I found through http://industrybroadcast.com. Some of the best minds on game design that take the time to write about it.

The one book that set the tone for this decade for me was a book recommended by a person I hold dear to my heart and one of the biggest influences on my current trajectory. The book is Homo Ludens by Johan Huizinga and the premise of the book as that Homo Sapiens have been misclassified as a species; our goal has never been knowledge, it’s play. Sounds like a book taking advantage of the whole gamification trend right? Wrong, it was written in 1938.

I would to think that I could give you some obscure app that no one knows about but I can’t. Flipboard is just so amazingly badass. Everyone should go get an iPad just for that app alone. I read Twitter, Facebook and Google Reader that way.

Would you rather be developing video games than working on an advertising platform for them?

I still cheat and draw up ideas for games, even build a prototype here and there with GameSalad, but a good idea today is still good tomorrow and we really need to solve the problem of pop-ups, banners and interruptive advertising in games NOW. So the best game we can design now is making sure Tap.Me delivers and have a boatload of fun while we do it.

How many video games have you actually played in your lifetime?

I have been a hardcore gamer since I was 8 years old, officially starting with the Intellivision and I programmed my first game on the Tandy-1000. I believe it would be conservative to put that number in the hundreds and logged thousands of hours. On iOS alone I have played a good 500+ games. It is so bad that I have to play before I go to bed every night or I just can’t get myself to sleep.