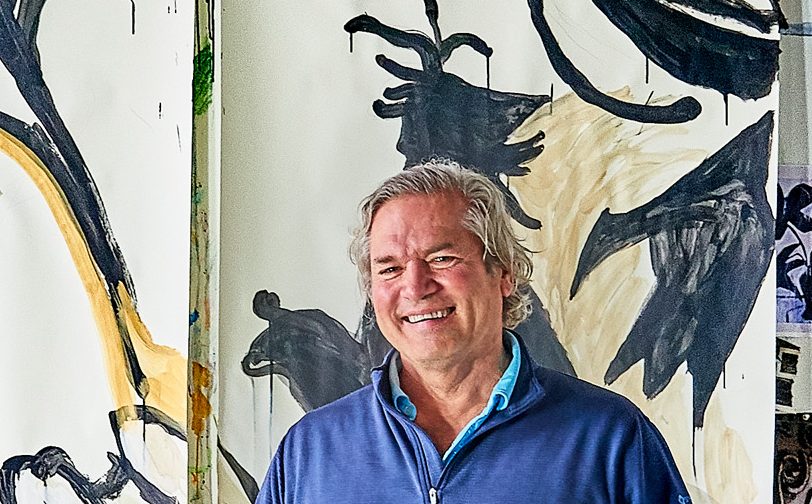 Ted Lee is a mixed media artist working in the Charlotte area. Specializing in abstract work, his pieces are quite unique. He makes them with anything and everything—oil, acrylic, pastels, colored pencils, even odd materials like shoe polish, marble dust, lipstick, and whatever else he can commit to canvas or paper. Each piece is created with the firm belief that if he pushes through the creation of that piece, he’ll fall in love with the results and thus create something memorable.


As a child growing up in Virginia, Lee showed a talent for drawing when he began recreating album covers of bands like the Beatles. His family encouraged his artistic abilities, and as an adult, he spent two years in the Air Force. When he received the GI Bill, he used it to go to Virginia Commonwealth University, where he majored in Painting and Printmaking.


While in college, Lee’s work was featured in the Virginia Museum of Fine Arts and the Chrysler Museum of Art to name a few. During this time, he won several competitions, including Best in Show for drawing at the VMFA with “Bush”, a large drawing in pen and ink. Lee has been represented in numerous art galleries, however, now he works independently in his studio located in NoDa in Charlotte and sells his pieces through Slate Interiors. Since then, he’s been commissioned by interior designers, office building owners, or others to create unique pieces for his clients. His current plans are to expand his following to other cities so that he can focus entirely on commissioned work.

The idea of branding myself and my art came from the fact that I paint and sell paintings. This was happening at a small scale at first – and then it picked up speed. When you have a talent – whatever it is – you find yourself wanting to do it more and more. Now, creating paintings has become an addiction.

When I walk into my studio – I know I am there to paint. I love my studio because it is a great space. It is in a remote location, on 1900 North Brevard Street between Uptown and the hip area called NODA – North of Davidson Street. The studio is in an old building whose outside boarding is made out of metal. I have been there since 2002, so for a long time.

My creativity comes from remembering the things I love, such as trees, for example. I grew up in Lynchburg Virginia. When I was a young boy, my parents used to take me to historic places on vacation, like Thomas Jefferson’s home Monticello, Washington’s home in Mt Vernon, or Robert E Lee’s home. However, it was not only the homes that attracted them, but it was the grounds and the landscape, especially the boxwoods. Every stately home in Virginia had wonderful boxwoods, and I loved their shape and smell. I bet most people do not know what a boxwood bush smells like. Later in life I bought a house in a historic southern France village called Vaison la Romaine. There, I experienced the same things as I grew up with, namely the landscapes that captured me. In particular, there was a 30-minute drive from Orange to Vaison that was stunning and really left an inspiring impression on me. I still go back to that long stretch of road that is very flat, but there are vineyards as far as one can see on both sides. There are also huge cypress trees on both sides that were planted by Napoleon to create shade for his army that marched down that road. The trees are 50-75 feet tall and they dance so elegantly in the wind. Driving down this road to my house would make me bite my lip in excitement as I watched the canvas of the dancing trees next to the vineyards and the mountains in the background. I can recall that imagery as if it was yesterday. It is memories like these and many others just like it that make me want to paint and continue to do so.

I am not sure whether it is a trend or not. I do feel that art now encompasses the ‘everything goes’ attitude. As such, I get excited about the history or art. In particular, I love the Abstract Expressionist period that was back in the 1950s. Some of my favorite artists from that era include Francis Bacon, Robert Motherwell, Robert De Kooning and Robert Rauschenberg. In a way, I believe that I am stuck in that time period of art.

I am persistent, which I believe is what also makes me tick along with having a desire to create something I am proud of looking at. Doing that and then feeling proud is what makes me want to share my art with the world.

My advice to my younger self would have been to go to New York City and become an artist. That was my dream when I was a teenager, but I was too young and poor to do that. I grew up in Lynchburg, Virginia with a family that did not appreciate art. I, on the other hand, was always fascinated with music and art, and I started drawing at a very young age when I was 10 or so. I had a drum set when I was 14. I remember looking at Time magazine and seeing stories about artists in New York.

I  am a true rebel at heart. I am a democrat and a liberal at the same time, but I do not let it show much because I am a private person. Remember that I am also a commercial real estate professional for the past 34 years, and my colleagues are mostly wealthy male republicans. Meanwhile, I like to look at the beauty of things, such as the clouds, trees, and the colors of things – in other words, the diversity of people. You know what they say, they did not see the trees for the forest.

I have an effective marketing strategy, and I recommend that every one market themselves because no one else is going to be a better campaign manager to you than yourself!

Networking – it is very important for me to keep the opportunities that are out there in the front of my mind. For example, six years ago I bought some furniture from a very cool store here in Charlotte, NC called Slate Interiors. When they delivered it all to my house, the manager who was there asked whose artwork it was he saw in my house. After I told her that it was mine, she asked if I would consider selling my work at Slate. I said yes, and it has been a success ever since.

Years ago, I took some of my paintings to art galleries to see if they would be interested in displaying my work there. This was not an easy task, and I was rejected a lot. However, when I hear the word ‘no’, I only become more determined. As such, one day in 2002, I asked the Hodges Taylor Gallery to display some of my paintings there. After they rejected me again, I left them a CD (the most modern way to share media at the time) of my artwork. After seeing my art, the owner later called and offered to represent me in their art gallery that was the best one in Charlotte NC at the time. I stayed with them until 2008, after which I started sharing my work on social media (Instagram).

I know this is going to seem shallow, but it is true – believe in yourself, because if you don’t, nobody else will. You must be confident in what you do and create and who you are as a person. My painting process begins with a blank white canvas. This triggers many emotions at first, especially intimidation, insecurity, and self-doubt. And this happens more often than not. But the most important thing is to start with one paintbrush and stroke followed by another and that will begin creating an image. Halfway through, I typically hate what I am doing and want to restart almost every time. However, experience has taught me to push through these mental hurdles because at some point I know the piece will get better. And it does, and it is at this point in my creative process that I have an image that I like and that I can then get excited about. This is also about taking a risk and painting something in a way that no one else would because I would be damned if I took the safe mode. Taking that risk makes me who I am.

It was putting it toward getting my studio at a time in my life when I had no money for this type of investment. I was going through a divorce, and I had two daughters who were enrolled in universities that were out of state. I was also earning 100% of my income from commissions. But I felt that it was something I needed to do for myself. I felt I had to paint, and I could not do it from home.

I have a lot of art books that I often look at. Some of my favorites are ‘Art of this Century’, ‘Art and Feminism’ and Cy Twombly. I also have a book called ‘Trees’ that I stole as a young kid from the Lynchburg library. Also, one book I keep going back to time and time again is ‘The Four Agreements’.