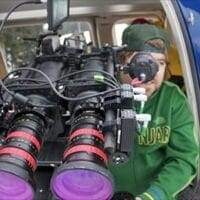 Todd Jones is a co-founder of Teton Gravity Research. Jones helped start the production arm of TGR in 1996, and has since been an executive producer and co-director of 29 action sports films and over 40 hours of original television programming for Fuel TV, NBC, and Showtime. Jones has also directed and filmed numerous nationally aired commercials for brands such as Nissan, Gatorade, Under Armour, and Energizer. Todd recently directed a 3D film shoot for a 3D segment to be included in TGR’s new film, Light the Wick. In the last few years, Todd has also been heading up TGR’s digital initiatives including digital distribution of TGR films, expanding TGR’s social networking program and reach, and overseeing the redesign of the entire tetongravity.com web platform. Tetongravity.com ranks among the top 3 snow sports websites in the world. in the world.

The plate is pretty full. On the film front, we are in post-production of two films, Light the Wick and Deeper. We are also in pre-production on an environmental surf film. Along with these films, we’re cranking out a ton of digital content. The digital/web sides of things are really going crazy. Two years ago, we did not have a new media department, we had just organically grown this high-impact website over the years. The site started in 1996 and quickly had blogs, videos, a community, and products for sale. We did not really know what we were doing, but we knew the space was really cool and embraced it from the beginning. Eventually, we looked at what we had achieved online and realized we needed to take it to the next level. I was able to hire Chris Dunn as the Head of New Media. There are now five of us in the department, and the rest of the company works hand in hand with the new media department on a daily basis. It is really cool to see everything come together. TGR has always been an experiment and a journey into the unknown, which is why we have naturally gravitated towards the digital universe. It is amazing how much stuff is flying around the planet via the TGR platform, wirelessly none the less.

The digital revolution as it relates to media distribution.

I was at a friend’s house the other night having dinner. We had music playing over the house sound system via Dish Network. I looked over at one point and there was a big message screen up on their 50” HD TV screen, informing them that they could plug a network cable into the television and access all kinds of new programming and features. We have been tracking this development for a few years. It was really cool to see it in someone’s house who really has no idea about the shift that is about to occur. I thought, “here comes lift-off.” I believe this will create a shift in the balance of power.  Personally, I am over flying to LA and pitching ideas to archaic television executives. We are now in the era where original programming will actually be original, and soon it will be available in as many homes as network television. That excites me and will forever change the face of media. All rules will be thrown out the window. The guard will fall and a whole new type of content and crew of content creators will emerge. It is hard to fully pin down exactly what this will all become exactly, but it will be very cool.

We recently did a 3D shoot in Washington. This is not the old 3D everyone is familiar with, but Avatar style 3D. The new display technology is amazing whether in the theater, on your home TV, or on a computer. YouTube has embraced the 3D space, as well. I expect this revolution to be big. We truly are living in the future that was unimaginable when I was growing up. I imagine the day when we hit a button and are viewing content and talking to people in far away places via holograms is not that far off. I think that the current 3D revolution is the start of this.

This is an obvious one that everyone is super hopped up on. Again, I like it because it is a game changer. It challenges the existing control and ecosystems that have been in place for years. I recently read that Ford is going to release their new Explorer via Facebook instead of at the big auto industry show, which is huge. There are major economics that are set-up around ad agencies, auto shows, and brands. It is like a “good old boy” network that manipulates and controls a large piece of the pie and creates this really faceless and soulless sense of reality. That world really no longer exists. There are people hanging on to it, but it’s going away. Ford is diving into the conversation by embracing the social networking universe. There is a lot of tension between consumers and the auto industry as a result of the collapse. It’s a great move to approach the vehicle launch this way. It has the potential to really make Ford America’s auto company again. It also challenges all the existing infrastructure. I look at it as a huge endorsement of the social media world that many of us have been living in for the last decade

I have a notebook that I carry with me. On the cover it has Name and School with blank lines after them to fill in. Mine reads like this:
Name: Todd Jones
School: of Life

Really, this is where I have gotten all of my education and experience. I have always just decided what I want to do and then I dive into it head-first. For instance, we were very interested in what all this 3D hype was about with the release of Avatar and all the new televisions and technology. We started to discuss it in a hallway meeting at the end of April. I walked back to my computer and started googling 3D and making phone calls. A week later, I was in a helicopter with a crazy 80 lb. 3D camera on a gyrostabilized mount, shooting Sammy Carlson (X Games Medalist) throwing switch 1440s over a 100-ft. jump. The point is that at TGR, we bring ideas to life by diving in head-first. Due to this process of diving into 3D, the entire TGR staff is now more educated than 90% of the population on 3D. Everyone has touched it in one way or another. We are constantly trying to future-proof ourselves at TGR. The team we have is very open minded about trying and doing new things.

We did a reality TV series with some big LA people a number of years ago. We compromised our beliefs and integrity chasing after a desire to have a big show on network television. We made decisions we did not believe in. Through this, I think we learned that integrity is the most important asset that people and our company can have. You learn way more from bad experiences than good. The bad ones sit with you at night and keep you up. You take them on vacation and everywhere you go. They can torment you, but they make you better, smarter, and stronger. They make your goals clearer and more pure. So get out there and make some mistakes, for crying out loud, because otherwise you will never learn as much as you truly can.

Is it worth it?

Yes, it is worth it. We have tried to build something that is a vehicle of inspiration for people to live their dreams. The TGR founders, employees, athletes, investors, fans, and partners have all shared and participated in this ethos. When we started TGR, it was just an idea that a small group of people in Jackson Hole had. We gave birth to it. We wanted to live out our dreams. Now this idea seems to drive itself forward and it is shared and driven by thousands of people. I always smile when I hear the name Teton Gravity Research. It is one big experiment.