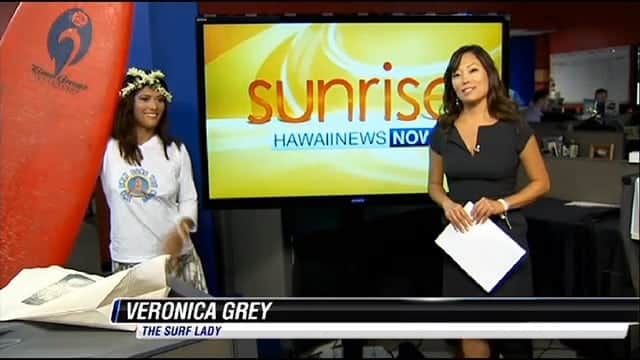 [quote style=”boxed”]I like to model myself after Forrest Gump. I don’t think too much and just allow things to happen, with grace and ease.[/quote]

Aqua Seafoam Shame is a critically acclaimed documentary with multiple nominations which explores the horrific diagnosis that 25% of our planet’s surface is now garbage landfill, due to the pacific garbage patch and plastics. In 20 years our world could end up with no coral reefs – which means our oceans will revert back to the primordial sludge it was before creatures walked on land. What, if anything, can be done to backpedal the Earth from this cataclysmic trajectory?

Veronica Grey wears many hats as an inventor, lifestyle expert, and business leader of America as well.

My recent appearance on “Good Morning America” made me feel a lot braver about my projects. I have a book out called “Charity Begins on The Red Carpet: How to LEGALLY Stop Paying Income Taxes Ever Again” and I would like all interested, qualified parties to be aware of

Where did the idea for Legally Tax Free come from?

I do not live in New York, but I happened to be there when those people did the Occupy movement. I saw them camping in the park and felt super sad for them. I thought I could camp with them to show my support OR I could give folks the tools that will make a real difference in their life as opposed to some lame token like “lower atm fees.” I began writing the guidebook immediately.

If you want to have your hand held and walked through the step by step process of becoming legally tax free, we can do a face to face Skype consultation. Fees are on a sliding scale. My Skype is Surfaholic11.

This is just one of my bajillion income streams.

I live on a sailboat in Hawai’i.
It is anchored off shore so I need a dinghy to even get to land.
My days look like Pirates of the Caribbean.
I just wish the water were cleaner.
Yes it is so sad that this remote paradise is tainted and toxic.

I like to model myself after Forrest Gump. I don’t think too much and just allow things to happen, with grace and ease.

I did not last even one day as a sandwich maker when I was 16, at one of those hoagie places.

The reason is the lady training me had gross sweaty hairy armpits and I couldn’t stand to look at them even for another hour. Thinking of them now makes me want to vomit. I learned that laser hair removal is awesome.

Not leave all my personal belongings at Billy Corgan’s house.

I am too Pollyanna to even recognize failure if it came up and bit me on the ass. I can’t overcome something I never even acknowledge.

I want to open a lunchtime only restaurant called “Eat and Sleep.”

You get a cot for two hours after a huge lunch. Everyone eats in booths with curtains. I love resting after a big lunch. The Spanish people with their siesta have it dialed.

OMG STOP USING PLASTIC IT IS CHOKING THE PLANET. So we made a documentary about it and screen it online for free

Guinness Book of World Records did not give me recognition for being a modern day muse: the person alive who has the most songs written for and about them.
Each of these bands has written at least 3 (if not more!) songs about me
Smashing Pumpkins
The Cure
Depeche Mode
Thirty Seconds to Mars
MGMT
Ghost of Gloria
Hole and Erasure together
Nirvana
David Bowie

Then again, what does Guinness know?

They still can’t figure out how big the biggest wave is, ridden by Garrett McNamara in Nazare, Portugal.

“6 Newly Discovered and Never Before Published Secrets to Eternal Youth and Immortality” because you CAN overcome death AND taxes.
We already dealt with taxes earlier in this interview, ergo…

@musicwars_klc cause she is an awesome environmentalist.

@TheCure because Robert Smith recently went out of his way for me.

Tonight before answering this interview. A shaman named Running Bear.

If you didn’t have your current job, what would you be?

I wish I was a supermodel.

If you could heal every person, how would you do it?

A chain of Flowers.
Nearest health food store has Bach’s Rescue Remedy.
I would get rid of all stupid pills, except xanax. They are nice especially for long plane rides.