Will and Dave Willis – Founders of Bully Boy Distillers 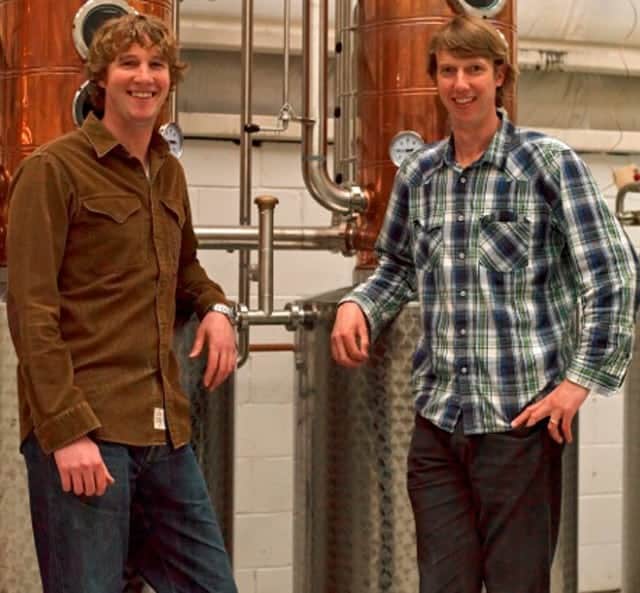 [quote style=”boxed”]Once you’re committed, and people know about it, your new identity has been cemented, and you can start to build the foundation of a company on it.[/quote]

Will and Dave Willis founded Bully Boy Distillers, Boston’s first craft distillery, in 2010. The two were inspired by Charlescote Farm, their family’s fourth-generation farm in Sherborn, Massachusetts. During Prohibition, the Willis brothers’ grandfather housed an enviable collection of artisanal spirits in the farmhouse’s basement vault, which also served as an underground speakeasy. Having been raised on Charlescote, Will and Dave are proud to honor their family’s tradition of local agriculture, helping to run the farm in addition to managing the distillery.

Before making the decision to pursue their true passion for farming and craft distilling, the Willis brothers were both working successfully towards established careers in corporate America.

Will was a Division I athlete and graduate of University of Richmond. Earning an MBA in Real Estate Finance from George Washington University, he worked for global real estate investment firms such as Jones Lang LaSalle and Concord Partners. Dave, a graduate of Colby College, holds his Masters of Taxation from Georgetown University Law School and a Juris Doctor from Suffolk University Law School. He previously managed commercial real estate negotiations and acquisitions for Chardon Property, LLC.

The brothers’ combined business education and training has served them well in successfully establishing the new distillery, laying the groundwork for future expansion.

On a personal level, both Will and Dave share an enthusiasm for athletics and music. Dave is a member of the Union Boat Club, and Will is a competitive tennis player and runner. Both guitarists, Dave and Will lived in Burlington, Vermont for a year playing in a local band with their third brother, Chris. Today, Dave resides in Boston and Will lives with his wife in Sherborn. Both travel frequently between the city and the family farm.

It’s a really exciting time for us right now as we prepare to launch our aged spirits. We’ve had white whiskey, white rum and vodka on the shelves since 2011 and have been simultaneously aging a wheat whiskey and traditional dark rum for release this fall and winter. We feel like having these two added to our lineup will really showcase the diversity and complexity of what we can produce.

We’ve recently expanded to Rhode Island and will be on the shelves in New Hampshire beginning this month. We’re also looking for like-minded local and regional companies to partner with for unique product offerings and cross-branding opportunities and are excited about the people we’ve met as part of that process.

Where did the idea for Bully Boy come from?

Bully Boy was inspired by our family’s fourth-generation working farm in Sherborn, Massachusetts, which is also where we grew up. While our grandfather lived there in the 1920s, he turned a field stone vault in the basement into an informal speakeasy for his friends and our family and amassed a large collection of local artisan spirits. In 2003, Massachusetts enacted legislation making it easier for farms to distill spirits; wanting to try a new way to carry on our family’s legacy in agriculture, we decided to take our interest in distillation to a new level.

Being the only two employees here, we wear a lot of hats, so we try to get started on the early side and arrive by 7:00 a.m. We’ll generally distill and package product between 7:00 a.m. and 2:00 p.m. After that, we put on our salesmen hats, and try to sell between 2:00-5:00 p.m., after managers are in but before they get busy. Finally, if it’s a night that we’re doing some sort of promotional event, we’ll typically be busy with that from 6:00-9:00 p.m. Our cars have a ridiculous amount of laundry in them.

By trying them. One of the advantages about being small is that our management team is just us, so getting approval to try a new idea, no matter how crazy, is never an issue. Our biggest advantage of being small is the ability to be nimble and take the risks that bigger players either can’t agree to or won’t spend the money to execute.

Infusions are really popular right now and give us the opportunity to get creative with our standard recipes. We recently partnered with local Boston mixologist Noon Inthasuwam of Umami and Moksa to create some custom infusions, and had a lot of fun sharing them at tasting events. Our two most recent infusions were crafted with floral ingredients to reflect summer. The first was a blend of our un-aged whiskey, hibiscus, Szechuan peppercorn, orange and simple syrup. The second was made of our un-aged whiskey, marigold flower, Myer lemon peel and simple syrup.

Will:  Worst job was working at a coffee shop. I worked for a vegetable farm one summer picking rocks out of a field, and I’d gladly relive that summer than work for another coffee shop. I learned how difficult the services business can be, and to be more kind and patient with anyone who works there. I also learned I’m terrible at making change and that milk scalds at 110 degrees.

Will:  I would start a company when I was single with no kids.

Outsource as little as possible when you first start. Not only do you save money, but you learn every facet of your business so that when you hire people, you’ll be able to more effectively evaluate their performance.

We both thought we could each do everything in half the time. It quickly became evident that we would have to choose tasks based upon what was more in line with our skill set. There are still a couple things we team up on (social media, packaging), but by and large, we each do half the work full-time.

There’s no need to develop a new groundbreaking idea from scratch—there are a lot of ideas out there that can be improved upon. For example, we don’t think anyone has taken the food truck movement to its fullest potential yet.

If we could control one thing, people would maintain the perspective of a 4-year-old for the rest of their lives. We’d all have boundless energy and believe the sky is the limit and everyone is your friend.

While there are cool new resources being developed all the time, such as Caskers.com, which gives you access to small batch liquors through a membership, we’re biggest fans of the basic three online tools that work the most for us: email, Twitter and Facebook—not too groundbreaking, but it works!

Absolut Book: The Absolut Vodka Advertising Story. Obviously, you need to make a quality product as a first step in being a successful brand, but the reality of the liquor industry is that you have to do so much more than that to ultimately succeed. This book outlines how Absolut Vodka grew their brand so successfully and offers insights into how to grow any company, no matter the business.

1.  Scott Kirsner – We like keeping up with what other entrepreneurs are doing in New England.

Watching Louis CK on cable. Best comic out there.

Josie Wales—rebel outlaw from one of our favorite movies of all time.

What was the scariest part of starting a company?

Making the decision to do it, and then “coming out” about it with family and friends. Once you’re committed, and people know about it, your new identity has been cemented, and you can start to build the foundation of a company on it.

What is the worst prank you ever played on your brother?

Dave:  As an April Fool’s joke, I told Will the Federal Liquor Authority (TTB) had just issued a state-wide recall of our product. His response was somewhat life-threatening, so I clued him in rather quickly!