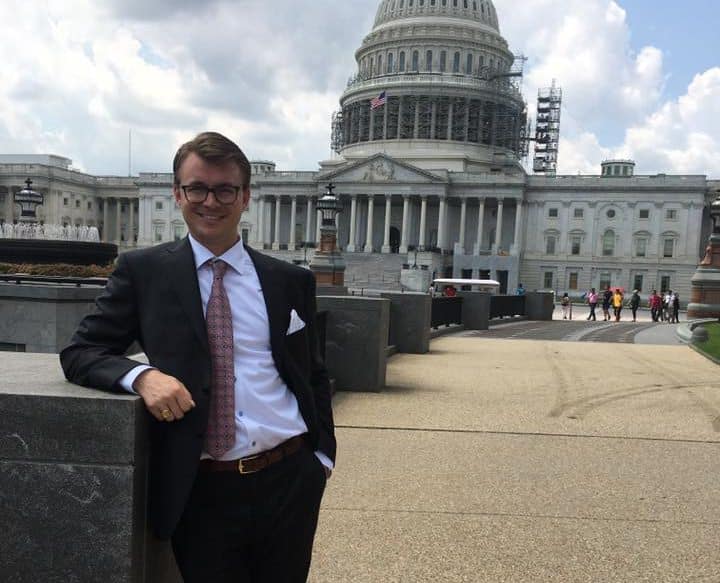 The convergence of [Augmented and Virtual Reality] will ultimately be what leads to us becoming more intelligent as a whole.

Will Mason is an accomplished entrepreneur and thought leader. Previously founded a well known brand in the Virtual and Augmented reality industry – wherein he launched and grew an industry leading publication that reached over 700k unique users each month and developed an ecosystem within the industry community. In 2018, prior to exiting his first company, Will Mason sold the media arm to a group of interested investors. Will Mason successfully grown large audiences for products, raised over $6m in venture capital, and established major partnerships with well known brands like NVIDIA and HP. Now focused on a new venture, currently in stealth, Mason is excited to combine two of his greatest passions – emerging technologies and sports.

Outside of work, Will is a diehard Carolina Panthers fan who moved to Charlotte the year they came into the league and his ‘claim to fandom’ is he has seen at least a play from every game they have ever played. Additionally, Will spends his free time enjoying films, fishing, and trying to not suck at video games.

I have a rather unorthodox approach that may not work well for everything, but I have a personal saying “when the winds of opportunity blow… go limp and let things flow”. I strongly believe in the power and presence of serendipity in day to day life, and I try and leave myself open to it at all times. This means leaving a degree of flexibility and non-routine to one’s day. Of course we have hard tasks that need to be done, and for those constant phone reminders and lists are quite helpful but I start every day typically focused on long term goals and how the serendipitous moments that are present in every day if you look hard enough can help lead to those. Sometimes, however, this means getting to some tasks late at night – once everyone else and everything else has calmed down a bit.

A ton of research, followed by a ton of ideation, followed by a ton more research and ideation. Once you have the idea solid, and understand why it is important, and who it is important to the steps to bringing the idea to life begin to materialize. But – and this is important – you don’t know everything so test your assumptions with people who know more than you in the specific sectors of the idea. Seeking advice on approach is truly key to bringing any idea to life.

Long term – Augmented and Virtual Reality and its future interaction with AI. The convergence of these tech trends will ultimately be what leads to us becoming more intelligent as a whole.

Work in real-time, but find methods to control that chaos. On a call with someone who asks “can you send me an email about X later”? Write that email on the call in real time. Think of someone you should reach out to about Y? Shoot them a quick message to catch up. Have a thought about something separate but derivative from what you are working on at that moment – take a second to put it somewhere you can retrieve it later. Things like this are what work for me.

Keep your chin up and your eyes pointed north – no matter what anyone else says, you have the power to create the life you desire by following your passions, and most importantly not giving up on them.

The Carolina Panthers are the best team in the NFL this season.

Read. Seriously, it seems obvious but never stop learning. Be it within your industry (important) or in the industries that touch it (more important) there are always things to learn – and the more you know the more you can apply. And don’t get discouraged at the size of the information mountain, as a professor once told me “The more you know, the more you know you don’t know”.

Discovering your core audience, your most passionate people, and turning them into ambassadors. You need to lean on the people who love your brand and company the most to help grow it. The better you know that audience, and what they want, the more effective you will be at applying individualized growth strategies within them.

Trying to do too much at once. Oftentimes, especially early, the paths forward seem endless and opportunities plentiful. Early in my career saying “no” to opportunity was tough to do, and it lead to me getting stretched too thin. And when you try and do a million things at once, you usually do few of them well. Learning to say no is just as important as seizing opportunity when it arises. The best entrepreneurs are adept at picking and choosing their shots. Be Tim Duncan, not Allen Iverson.

One thing that I’ve always wanted but never had, is a simple way to sign an NDA like document between friends. Colloquially many people call this a FrienDA but having something simple, like the Bump contacts app used to be, that allows you to quickly in the flow of conversation protect your ideas formally would be amazing for the start up ecosystem – so if someone could build that for me (and us) that would be amazing!

It was a little more than $100 (on sale) but a quality espresso machine for my apartment was the most recent purchase I cannot shut up about. I had been spending too much on my morning coffee and making the same quality at home has not only saved me money but also made my mornings much more pleasant.

Slack – It’s obvious but it has been a godsend for team communication, making it much easier to retrieve information. I tend to work in real time with my thought process, and slack makes it easy not just to translate that into writing but also to retrieve that information quickly and easily.

For Business: The Hard Thing About Hard Things – Ben Horowitz
While this book is rather obvious and appears on most lists for entrepreneurs it is on them for a reason. In this book Ben Horowitz offers countless insights on the not so smooth road of the startup world. There are many tough decisions that we are faced with each day, and facing up to them can sometimes seem insurmountable. But in those moments oftentimes the best results can be found, and that is exactly what Ben Horowitz outlines in this book alongside some great war stories that can be used as touch points for entrepreneurs facing difficult decisions.

For expansion of the mind: The Hitchhikers Guide to the Galaxy series – Douglas Adams
Written nearly 40 years ago, these books are as screamingly funny as they are intelligent. Buried underneath the silly surface are some deep questions and proposed answers around our purpose of existence. You will cry laughing while reading this book the first time through and will sit and ponder the second. This is my all time favorite book series for many reasons but the perspective it offers on philosophy of existence is one that is well worth the read – especially in our technologically driven times.

Bonus: The Forever War – Joe Haldeman
A thoroughly underrated book that was prescient in its vision for the development of society, scathing in its commentary of the times in which it was written, and strikingly poignant read in a modern context.

― Douglas Adams, The Restaurant at the End of the Universe