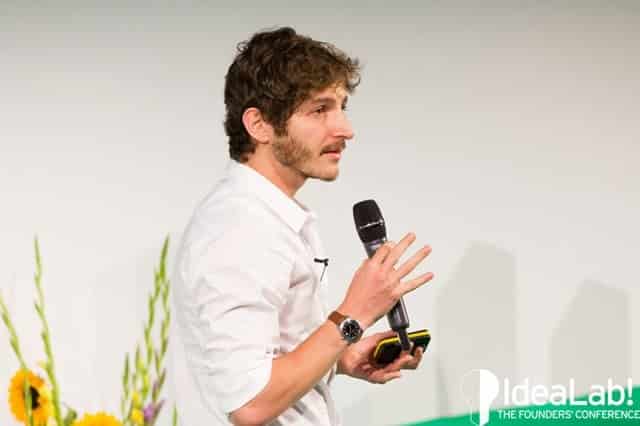 When you swim long enough you understand that there isn’t a real way to win over other people in the pool, the only thing that matters is beating your own time over and over again.

Yali is a former TV actor turned entrepreneur. He has also spent three years as a war correspondent in different parts of the Middle East, a political spokesperson, and general havoc maker that once hitch hiked on tank to get dibs on a story. In his current role, Yali is the Co-Founder & CEO of TailorBrands.com, a branding-technology company that uses advanced machine learning capabilities to teach computers how to design brands with computer AI. Yali is in charge of all the business development activities of the company. Prior to founding Tailor, Yali was chief creative officer at Raising the Bar, a non profit rebranding education in NYC, and a freelance creative for several global marketing agencies. He went to Columbia University in the city of New-York and is a regular speaker at events, most recently Idealab! Germany.

Where did the idea for TailorBrands.com come from?

Good branding cost a lot of money, and it’s hard to compete with big spending budgets of top tier brands. Being former marketers and designers ourselves we wanted to give Small business owners a way to fight back, by democratizing the process, and offer great branding for affordable prices.

Since the equation of the problem was Time+Talent=Money, and talent is what we wanted to keep in the product, we knew we had to take the time factor out of the process. Our solution was an algorithm that could “think” like a designer, essentially translating the world as a designer would see it. Today, TailorBrand.com is the next generation branding platform, one that can design your entire brand with computer AI. Providing the small business owner’s branding needs. With a click of a mouse – and a tenth of the market price.

I organize my days in lists. Less due to the obsessive-compulsive nature of it and more because it allows me to define targets and mantel reward myself for accomplishing them on time. Since work is never really over it lets me finish my day with a smile rather than stress over the things I have to do tomorrow.

My day starts with a swim, after which I have my breakfast+coffee while answering the emails that piled up during the night at the office. Once these chores are complete I go on according to my list, mainly meeting with partners, working on our business development and so fort. We all work in a shared space and communication is always good so we usually satisfy for one office meeting every Friday to decide about next week’s goals.

James Baldwin has a great quote saying: not everything that is faced can be changed, but nothing can be changed until it is faced. If I have a great idea, I just start rolling, without being too scared of messing it up. I found that my number one setback was waiting and thinking about an idea over and over, until it became to abstract to actually execute.

The growing awareness of neuro-marketing and the effects that a consumer driven society has on our brain. Branding has forever been a very powerful weapon, and big brands manipulated their overall dominance in the field for their advantage. I think that in recent years there is a growing understanding on the consumer side that they are being sold consciously and subconsciously, and as a result the dialogue between big brands and consumers is becoming much more interesting.

I swim. Every morning. When you swim long enough you understand that there isn’t a real way to win over other people in the pool, the only thing that matters is beating your own time over and over again.

I was a political spokesperson in an internal election when I was 21. It is a very stressful environment where, the short life-span of a campaign, combined with the life changing effects of it lead to you being shouted at more times a day then you can impinge. I learned there how to listen, even when the other side isn’t really making sense, and how to carefully assess the benefit of every word you say.

There are so many mistakes we have done along the way so it is a bit hard to choose one.
To top that up we have a saying in the team that it is the sum of your failures that led to your success. At the end of the day, I would remind myself that it is important to share time with people outside your team. Both for inspiration, and for your mantel health.

Data doesn’t lies. Many times when things are stagnated you feel an urge to change something fundamental about your product or marketing approach. Despite the fact that you may be on to a good idea, you should always run your impulse vs. data and analytics. Often we were to busy in building a new ship when all we needed was fixing a hole.

I suffered of trying to do too much in too little time and doing nothing eventually. I overcame it by — Yes yes — plugging in music and forcing myself to focus on one thing at a time. I also began to understand that it hurts the productivity of the company.

How about free city-wifi powered by ads? Most tourists don’t have roaming while visiting cities like NYC, London and Paris. These people usually migrate from one Strabucks to the other for wifi. The idea I was playing with to create a whole new type of billboards. Routers could be placed on electric polls around the city and supply pedestrians with a free hour of wifi for every commercial they watch.

I was actually a child TV actor, I shot over 160 episodes. It was a pretty cool experience but I wasn’t too good at it, and I Can’t say I won Cannes for any of my roles.

I would recommend Buyology, by Martin Lindstrom. It’s current, it’s relevant, and it really opens up your eyes about the things brands are willing to do in order to sell