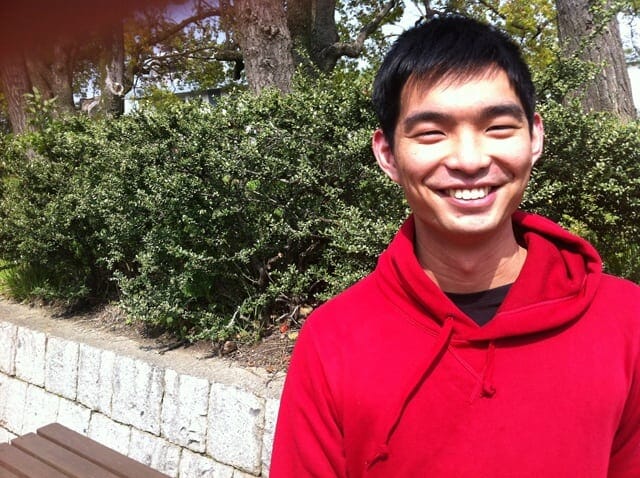 Yuki Furukawa is the CEO and co-founder of yamory, a subscription service for regular delivery of prepackaged emergency provisions. He did some volunteering in Ishinomaki, Minamisanrikucho where he got the instinct that there needs to be a service like yamory. He graduated from the University of Tokyo.

We’re working hard to make sure that all households in Japan always have food reserves for at least three days.

After the earthquake last year, people in Japan experienced major disorder in the logistics systems. The food supply system in Japan is normally so efficient that each person is able to keep as few food reserves as possible. That is good, until disaster strikes.

yamory is intended to be the safety net of our food supply system.

Where did the idea for yamory come from?

When you want to help people stock food, it’s natural and logical to come up with the idea of a regular delivery model and I wondered why nobody had done this.

There is no “typical” day these days. Each day is special. Not every day is good. There are ups and downs, but at least I’m enjoying myself.

I believe there are many ways to bring your ideas to life, but for those who don’t have much money, time or experience (like me) the Lean Startup way is the best.

I talk about my ideas and hear what people say. I create a very easy version of my idea (what they call Minimum Viable Product) and then I find people who get enthusiastic about my idea and want to be part of it.

A job with guys I didn’t like. The income wasn’t so bad, but I learned that I should be working with people whom I like and respect.

I experienced several failures in launching yamory, but they were trials/experiments and we needed them. I wouldn’t do anything differently.

Experiment with your ideas.

I believe it’s the case all over the world that entrepreneurs aren’t the majority. Not everybody understands you. Some would argue that it’s too risky and you should work  just like ordinary people. (And in nine cases out of ten, they’re right.) I was lucky enough to be part of entrepreneurial community.

A distributed autonomous solar energy system. Solar panels are getting cheaper and cheaper and it’s time to make use of them, not just make them. The biggest problem of solar energy is that they depend on the weather and that its output isn’t stable. If you read Japanese, this is a great blog post about a great possible solution. By using used car batteries, maybe we can build a eco-friendly, cheap and independent energy system.

Just look at my projects and you’ll see.

I opened my Christmas present before Christmas when I was ten.

Trello: This is the greatest tool to organize your tasks and share with your teammates.

Google Apps: Although twitter and facebook have become a great part of communication, Gmail is still the best for me.

Tumblr: I clip ideas, whether it’s a picture or a quote, to my tumblr. It can be a great source of inspirations.

I believe most readers love design, technology or business books and read many books. Let me recommend a movie instead. It’s Kurosawa Akira’s “Ikiru.” It’s pretty old, but I really love it. It tells you how wonderful it is to live your own life and to do your project.

I laugh out loud a lot…

Do you have any specific number, whether it’s sales, profits or customers, as a goal?

We’re still in the early stage and are focused on customers and vision only. I fear that focusing on numeral goals too early might damage our vision.