12 Mistakes That Can Crush Your Business 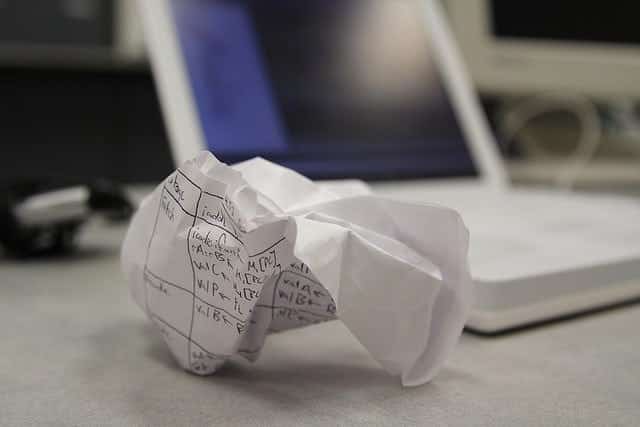 A lot of times we learn the hard ways what not to do in business. But sometimes we have the chance to learn from other people’s mistakes, which is arguably a much better way to go.

Here are 12 mistakes–based on the experiences of the entrepreneurs interviewed here on IdeaMensch–that can crush your business.

1. Not testing your product (or not knowing your market)

First and foremost, make sure there is a demand for your product/service before you sacrifice your first-born child (or your cat or whatever) to get things up and running.

Andy Kallenbach, founder of FormZapper, advises, “Spend less time talking to investors and more time developing a solution and talking to customers.” Emmitt Parkman, founder of Sports Talk Trash, reinforces this notion, saying, “I recommend being sure of your base market so you know how many people are interested and where they are, so that it is easier to target them.”

Emily Gimmel, Founder of GRACESHIP, admits, “I would have gotten to the marketplace sooner. I spent a lot of time trying to perfect my business plan when I could have been executing it. So much of being an entrepreneur is about learning as you grow.”

Okay, this is easier said than done. However, in business, it’s incredibly important to remember that the math has to work–eventually.

As Colleen McCarty, co-owner of Expert Message Group, recalls, “My husband and I started a restaurant straight out of college, and we got very emotionally attached to an idea and a location that did not make sense financially. We ignored all the signs and went ahead with everything anyway. We lost a lot of money that our relatives had generously invested in us. We ended up having to close the restaurant and let down a lot of people. We learned so much from that, but if I could go back, I would have listened to my gut, not gotten emotional, and really listened to what the numbers were telling me (I wrote a very detailed blog on what I learned from this experience).”

If you feel yourself getting swayed towards making decisions that might not be best for your business, ask some advisers or other people you trust–and really listen to their insight.

And as a personal practice, take Susan Shaw’s advice. As she explains, “Try to take time to think about your business from the outside rather than just the inside. The phrase I’ve been trying to focus on is: “Work on your business, not in your business.”

3. Working in a vacuum

You’ve heard it before, but we must say it again: ideas don’t come to life–or grow–in a vacuum.

As Christian Gray, executive director of inCOMMON, says, “Like anyone else, I’ve had a lot of great ideas and a lot of terrible ones as well. It can be so difficult to get out of our own heads and see things from a different angle. Immersing yourself within a trusted community of people who can kill your idea from point-blank range is a gift. Furthermore, ideas (good or bad) obviously don’t come about in a vacuum. The best ideas are almost always adaptations of preceding ideas (there’s nothing new under the sun). Therefore, working and living in community is key for an entrepreneur, because he/she must be continuously exposed to new thoughts and paradigms.”

4. Choosing the wrong employee(s) or co-founder(s)

This is a tricky one, and can have serious repercussions–so don’t take it lightly. As John McPheters, founder of CLDmkt, shares, “For a while, as a startup entrepreneur, I had trouble finding good candidates to bring aboard who could also buy into the dream. Staffing is always a difficult challenge, but thankfully, I’ve cut my teeth enough times that things are much easier now. Learning how to spot talent is definitely an acquired talent! Perseverance paired with advice from people who had been through the process before helped me along. Tap into your network for the first round or two of new recruits, and always remember, ‘birds of a feather.’ Your friends/colleagues are most likely to have the best people to refer, and when that doesn’t work, dig in, get creative and poach if you can.”

Juan Diego Calle, founder of .CO Internet S.A.S., says, “Hire the best people you can find, even if you think (or if others tell you) that doing so is overkill. Your business is only limited by the capacity and talent of your hires.”

If you’re thinking about going the co-founder route, we strongly suggest reading this article first.

This might seem like a strange thing to list, considering that many people will tell you to always say “yes” if you want to be successful.

But as Chris Hughes, founder of Artifact Bag Co., will tell you, “I had to learn to say ‘no’ all the time. I only say ‘yes’ when that which is being asked of me is absolutely in line with my core objectives for Artifact Bag Co. Otherwise, I miss deadlines on my roadmap and have little to show for it.”

Shari Beaudette, owner of SPA Time Living, notes, “Say yes to opportunities that align with your vision and purpose. If the passion is there, the ‘how’ will fall into place as long as you do the work.”

Not telling the whole story is a lot like having a “gimmick” (see #7 in that link).

Grant Harris, owner of Image Granted, puts it simply when he says, “Withholding information from others is a quick way not to earn their trust. He goes on to explain, “Keeping secrets is the easiest way to begin down a trail of lies to cover things up to save face. I may not spread my business around voluntarily by my own admission, however, when asked a straight question, I am upfront and honest.”

Nothing’s perfect, so don’t be afraid to admit when you screw up. If something goes wrong, or if there’s a hiccup in the road, own it and move on.

When you’re drained, pressured and in the middle of multi-tasking, you definitely don’t want to make any big changes or shifts. Vivien Morrell, Owner of Le Beau Cake, shares, “Things are often better after a good night’s sleep, and you can look at them from a different perspective.” Need we say more?

8. Spreading yourself too thin

Building a successful business requires incredible focus and involves a tremendous amount of responsibility. And when you’re the one running the show, things can get overwhelming. Don’t get caught in the vicious cycle of trying to do everything.

Lief Larson, CEO of Workface, says, “Like many entrepreneurs, I was responsible for a number of different roles in the business. The problem was that I was trying to keep up with all of them, but wasn’t being effective. It became a problem because I wasn’t seeing any positive movement with the business. I overcame the problem by asking for help from others.”

9. Assuming you know everything

Self-assurance is one thing, but be careful not to cross over into the “know-it-all” arena. Just because you’re an expert in one capacity doesn’t mean you should get carried away. There’s always something more to learn, no matter how much you already know, especially in these fast-changing times.

Erika Napoletano, creator of RedheadWriting, shares, “I used to think that I was the only one with brilliant ideas and everyone else was a moron. Turns out that I was the moron and most of ‘my’ brilliant ideas these days start with the ideas of others and those who are willing to share their time and thoughts with me. I can’t believe how stupid I was and for how long. Collaboration is a treasure trove and arrogance will keep you from unearthing its reward for as long as you choose to keep your head up your ass.”

Don’t become an old dog, especially if you want to stick around. Instead, follow Todd Silverstein’s advice and, “Put yourself in situations that make you uncomfortable. It’s the only way to stretch and keep growing.”

11. Waiting for the clouds to part

Simply pressing the “publish” button or turning on the “open” sign doesn’t guarantee anything. You’ve got to be dedicated to talking about your business a lot–and often.

Kirk Hasenzahl, co-founder of RareWire, advises, “Sell. I think one thing that a lot of people overlook when they have that great idea is the sales side of things. Just like you need that rockstar developer, you also need that rockstar sales guy who can go out and generate the business for the new company. You can’t overlook that. It requires as much or more effort than anything else to jumpstart a company. If you build it, they won’t necessarily come. You’ve got to go get ‘em.”

After all, not everyone is like Tama J. Kieves and gets a fairy godmother email.

(Be sure to watch Brian Wong’s talk on getting lucky.)

While the brain’s ability to store information and thoughts is amazing, it’s generally a bad idea to rely solely on your head to process things. To really work through concepts, one must make them tangible to the external world in some way.

Peter Vogel, co-founder of Plink, explains, “I’m a huge believer in the power of writing and its ability to take you places you hadn’t considered and to help you generate brand new ideas. There is something about putting pen to paper (or even typing) that stimulates parts of your brain, firing neurons across different synapses of your brain. It really stokes the fires of your mind. It’s very powerful stuff. Any time I’m stuck on an idea, I write.”

12 Mistakes That Can Crush Your Business Image Credit