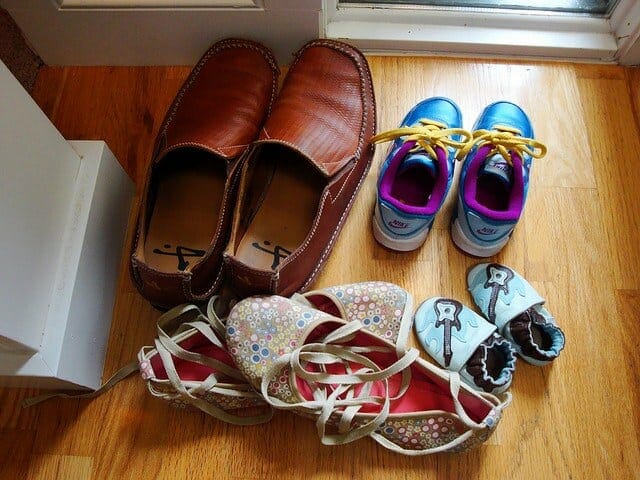 Being an entrepreneur takes drive, unwavering commitment, and of course, a little bit of built-in crazy. Being a parent involves pretty much the same things. But being a “parentrepreneur” takes serious cojones, so we want to take a minute to recognize some of the women and men who carry this title (officially or otherwise). These superhuman work-life jugglers start and run businesses at the same time they raise families–to help other families. And if that doesn’t deserve a virtual high-five in the comment section below, we don’t know what does.

Sally Whittle, Creator of the Tots100

Sally Whittle is a freelance blogger and writer based in the UK. After spending 12 years writing about the tech sector for various magazines and newspapers, she caught the blogging bug and began blogging at Who’s the Mummy, which was ranked the UK’s #1 mummy blog in 2010 and 2012. In 2009, Sally launched the Tots100 index to aggregate information about the rapidly growing UK parent blogging community.

Paul Molluzzo is the founder of Baby Goes Mobile, a “grandma-proof” web application for creating baby books with your cell phone. Paul took the inspiration from the website he built for his firstborn son to create an easy-to-use application for other parents to take advantage of the mobile web they have in their pocket. As founder, Paul created the concept, oversaw the offshore development and is now on the hunt for a technical co-founder to take Baby Goes Mobile to the next level.

Stephanie Silverman and Susan Borison, Founders of Your Teen Magazine

Stephanie Silverman and Susan Borison launched Your Teen magazine in 2008 after years of wishing that someone else would produce a parenting magazine for parents of teenagers. Three years and 12 issues later, Your Teen was chosen to participate in Build-It-Big: Cleveland, a local business development program for women-led businesses in Ohio.

Janette Eusebio Harwell is the founder of Box Play for Kids LLC, a company that makes eco-friendly, 100% recycled, custom-designed stickers that turn throw-away boxes commonly found in the recycling bin into repurposed, fun and simple toys.

Charlie Capen is co-founder of HowToBeADad.com, an entertainment site and dad blog for “parents, soon-to-be parents and people who have no desire to procreate, whatsoever.” The site features running commentary and visual diagrams on the idiosyncrasies of fatherhood, parenting missteps and his own adjustment to having children.

In 2005, working mother Sari Crevin created the very first prototype of SippiGrip in San Ramon, California. She was becoming frustrated when her one-year-old son, Jake, would throw his sippy cup to the floor from his high chair, stroller and car seat. Sari was constantly picking up the cups that were either getting dirty or getting lost. Hence, the SippiGrip was born. After an evolution of prototypes, research and testing of the SippiGrip, Sari formed BooginHead LLC in September 2007, and dedicated herself to launching the new and useful product for parents.

Australian-born and the co-founder and CEO of gDiapers, Jason Graham-Nye has turned his commitment to making the planet greener and healthier into an environmentally friendly hybrid diaper company. One diaper, two options: reusable cloth and a biodegradable disposable. Graham-Nye launched gDiapers with his wife Kim in 2005 and has been nurturing the company into a growing success every year since.

Alli Price, founder of Motivating Mum first started launched her business as a life coach four years ago, at the same time as giving birth to her first daughter, Amelie. Stuck at home for a lot of the time, either feeding and changing nappies or working on the computer, she quickly realized how isolating it was to work from home and decided to host a networking lunch in the hope there were other mums like her. There were–40 or so of them–and the Businessmums’ Networking Lunch was launched.

Karla Valenti is corporate attorney who recently left a career in law to found a company focused on developing and implementing resources designed to empower children through creativity. Rock Thoughts is the first initiative she is spearheading under this new role. She also writes Tot Thoughts, a blog focused on raising intelligent, creative and empowered children.

Bruce Sallan, author of A Dad’s Point-of-View: We ARE Half the Equation and radio host of The Bruce Sallan Show – A Dad’s Point-of-View gave up a long-term showbiz career to become a stay-at-home-dad. He has dedicated his new career to becoming the Dad Advocate. Join Bruce and his community every Thursday from 6:00 – 7:00 p.m. PST for #DadChat, the Tweet Chat that Bruce hosts.

Dr. Kimberly Greene, Author of My Sister’s a Pop Star

Dr. Kimberly Greene was an established performer, entrepreneur and college professor when she embarked on a writing career. Guided by a personal mission to teach tweens to like themselves the way they are, her now internationally successful tween book series includes My Sister’s a Pop Star, The Fame Game and Me and My Life on TV. Dr. Greene has effectively created age-appropriate media that both entertains and engages tweens, without pushing them to grow up too fast.

Naomi Richards, also known as The Kids Coach, is a life coach for children as young as age six. She provides behavioral and emotional coaching, creates a space for children to talk confidentially about why they are unhappy, and helps them resolve their problems in an interactive, creative and supportive way. Richards speaks at conferences, and her first book, The Parent’s Toolkit, was published in February of 2012.

Tangela Walker-Craft, Inventor of the GoPillow!

Tangela Walker-Craft is a wife and mother. She is the patented inventor of the GoPillow! She markets and sells the GoPillow! through her Simply Necessary, Incorporated website. She is currently the Lakeland Parenting Examiner for Examiner.com, an online news outlet. She draws from her experiences as a homeschooling mother and former Language Arts teacher for her articles. She has had a book added to the American Dental Association Library Children’s Collection in its unpublished form.

Ewa Harr worked at the San Francisco Child Abuse Prevention Center (SFCAPC) for several years as evening coordinator of the therapeutic Children’s Playroom. As the playroom coordinator, Ewa supervised, trained, and supported staff and volunteers in understanding children’s social and emotional development. She also assisted parents and children in navigating developmental issues. Ewa received her licensure as a marriage and family therapist in California and returned to the DC area in 2007. She became a proud mom that same year. Ewa founded ASAP Sitters in 2008 and has continued to own and operate the company. In 2010 she was elected co-president of the board at Spring-Mar Cooperative Preschool in Burke, VA, and in 2011-12 she served as president.

When Jennifer Kelman became an aunt, she spent as much time as possible with her niece and nephews. That is how she discovered her storytelling muse—improvising characters, channeling silly voices and doing impersonations. Taking care of her nephew when his parents were away, Jennifer was inspired to create Mrs. Pinkelmeyer, Silliest, Warmest Know-It-All, and her lovable dog Moopus McGlinden. Now she has created a line of products including dolls, music, temporary tattoos and a children’s book series based on Mrs. Pinkelmeyer. Jennifer continues to develop Pinkelmeyer products, and when not in Pinkelmeyer mode, she is an avid athlete who enjoys tennis. Jennifer’s greatest joy, however, is motherhood. She is blessed with new twins, a boy and a girl, who inspire her creativity.

Meredith Ferguson, Founder and President of Calm the Crazy

Shortly after her first daughter arrived, Meredith Ferguson’s day job, home life and entrepreneurial spirit collided and sprayed inspiration all over her clothing. When her boss pulled her aside to “jokingly” let her know that she seemed to always have ”something” (a.k.a. spit-up or snot) on her shoulder, she knew she needed to get a handle on her chaotic morning routine. Changing her clothes multiple times was a hassle and refusing to hold her girls once she was dressed was distressing. When she looked for something that could help her, she realized that there was nothing out there that was cute but also saved her clothes from excessive wear and tear. And so she developed the Kikou—a stylish, machine-washable wrap that protects clothing from life’s little messes. So, with the Kikou and the other products in the pipeline that help manage the chaos of everyday life with kids, Calm the Crazy was born.

A mother of three, Annabel Karmel is the UK’s number one parenting author on feeding babies and children. She is an expert in devising tasty and nutritious meals for children without the need for parents to spend hours in the kitchen. Annabel has written 26 books on feeding babies, children and families and sold over 4 million books worldwide.

Before creating KneeBouncers, Jim Robinson and Kurt Dommermuth have spent a combined 36 years in marketing and advertising. They managed, directed and produced dozens of award-winning promotional campaigns for high-profile entertainment, hospitality, non-profit organizations and Fortune 500 companies. They are the owners and driving force behind PUNCH a highly successful advertising, design and digital agency.

Lauri Burns is the founder of The Teen Project, a non-profit organization founded in 2007, whose mission is to give every foster child an equal chance in life. As a young girl, Lauri was a victim of an inadequate foster care system. Before she founded The Teen Project, Lauri had been a foster parent to 18 teens. She found that caring for foster children brought her personal rewards beyond her expectations, but she knew that she could not take every child in need into her own home. The Teen Project offers hundreds of teens, ages 17 to 24 the support, guidance, and opportunity to have a promising future.

Kendra Stitt Robins is the founder and executive director of Project Night Night, a nonprofit organization dedicated to providing care packages for homeless and transient children living in shelters across the country. Founded in 2005, Project Night Night donates more than 25,000 Night Night Packages each year, free of charge, to homeless children who need our childhood essentials to feel secure, cozy, ready to learn and significant. Each Night Night Package contains a new security blanket, an age-appropriate children’s book and a stuffed animal—all nestled inside of a new canvas tote bag.

Julie Aigner grew up in Michigan, where she went on to attend Michigan State University and major in English literature and secondary education. After teaching middle and high school, Julie left work to become a stay-at-home mom to her first daughter, Aspen. It was this experience that inspired her to create the Baby Einstein company. Julie made what she wanted for her own child—high end video board books that would delight her baby with bright images and beautiful music. In 2001, she sold Baby Einstein to Disney. Julie is a two-time breast cancer survivor and recently authored a children’s book called You Are The Best Medicine, published by Harper Collins in September 2010.

Know of any other awesome parentrepreneurs who we should interview? Comment below.