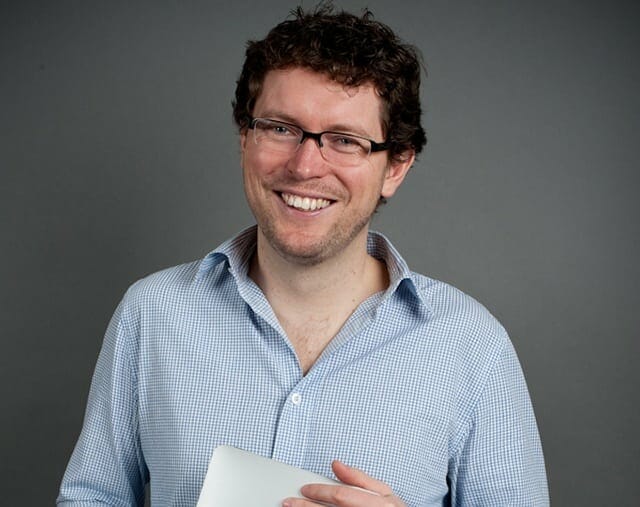 [quote style=”boxed”]Ideas spend a long time as ideas. I play with them myself and think about them at the computer, when I’m hiking, at yoga (which I know I’m not supposed to do), and sleeping. I roll them around and look at them from different angles. When I’m happy with how things look, I start to get input from others and move quickly from idea to action. People around me think I move very quickly from idea to implementation because once I talk about the idea with them, it becomes real quickly, but the idea has been building in my head for a long time.[/quote]

Andrew Angus is an author, speaker, and founder/ CEO of Switch Video, a video animation company that produces simple videos that “explain what you do” in an engaging and compelling format. Switch Video works with companies of all sizes and has produced over 350 videos for clients like Microsoft and American Express in 15 countries and 8 different languages. Andrew is a thought-leader in the online video industry, writing and speaking about the brain science behind making your company’s story it stick. He welcomes people to reach out to him on Twitter or Google+ and can be booked to speak on Speakerfile.

With the pulls of cash flow, sales, production, marketing, and HR, it can be impossible to figure out what to actually work on. My focus is on our social media and advertising for 2013. I love what we can do on LinkedIn, both as paid advertising and in building a network. LinkedIn is becoming my number-one place to find great people and strong, relevant content.

Where did the idea for Switch Video come from?

I started a home heating company that was hard to explain. Everyone looked at me like I was crazy! So I made a video to explain it for me; it’s horrible, but you can watch it: http://www.switchvideo.com/resources/our-first-video/.

I spend a lot of time in San Francisco; I would like all my days to start in San Francisco. I get up early; I’m on the computer at 6am for an hour of work. The office is on EST, so the team is just getting started. Because of the time change, I can get a ton done, setting up the day before 8am. I head to The Boulange Bakery on Cole for breakfast – and to celebrate not being in the snow back home!

The rest of the day is a mix of internal projects and external meetings, focusing on the core business and focusing on where we are going next. My main job is keeping those things in alignment with each other. Most of it requires email and phone calls, with in-person meetings here and there.

The truth is this is really my ideal day. I am in San Francisco, Collingwood, and Toronto equally, and traveling the rest of the time, so I’m typically pulling clothes out of matching Ikea dressers in the three cities I live in. After that, anything can happen.

Ideas spend a long time as ideas. I play with them myself and think about them at the computer, when I’m hiking, at yoga (which I know I’m not supposed to do), and sleeping. I roll them around and look at them from different angles. When I’m happy with how things look, I start to get input from others and move quickly from idea to action. People around me think I move very quickly from idea to implementation because once I talk about the idea with them, it becomes real quickly, but the idea has been building in my head for a long time.

Collaborative consumption, or the ability to not own anything, excites me.

In 2012, 30% of my company’s revenue came from outbound sales in San Francisco; moving to San Francisco was a rush decision. I went for the first time in October and moved there for six months just a month later. I could only do this because I don’t own a home and could easily get a home in another location using Airbnb. People are focused on home ownership, but it can tie you down. Richard Florida’s research shows unemployment is higher in areas with high home ownership because people can’t move when the economy changes. I love not owning things so I can act on opportunities. If I hadn’t moved so fast and increased revenue by 30%, my company might not exist today.

I worked for a manufacturing company that hired the same type of people with very similar backgrounds. The place was a mess because of it. You can’t build a great team with identical people who share the same outlook.

There’s a lot of room for tracking the success of video and linking it into CRMs.

I was once detained at the United Nations during a climate change negotiation session. I made a sign that said, “Clean Power for Poor Women.” The UN was not happy about it, so I spent eight hours being detained. The Canadian government was not happy, either, kicking us out of our hotel room. Other countries liked it, though, so they gave us better hotel rooms than Canada did!

What are your three favorite online tools, and what do you love about them?

Ruby Receptionists: I love that all our calls from 9 a.m. EST to 9 p.m. EST are answered live. I believe it makes a huge difference in how people view Switch, and Ruby offers incredible customer service.

Sprout Social: It costs more than other options, but it helps me organize my social media profiles and share interesting content, engaging with the people I follow.

Vidyard: We use Vidyard for all our video hosting and it is, by far, the best option out there. We can see the analytics about how people engage with our videos. The best part is you can split test splash screens, dramatically increasing how many people watch your videos.

It’s a total cliché, but I have to say Good to Great. It has had the largest impact on building the company. The hedgehog concept is something I think about once a week. The goal has always been to be the best in the world, to enjoy doing it, and to make money. We have now accomplished all those things, and we’ve done it from a very small town; this concept and book helped guide the process.

I go to Songza and pick a few options. Right now, I am “Waking up Happy,” and then wanting “Peppy Indie Pop/Rock,” then choosing “Sunshine Indie Pop.” Music plays, and I don’t know who the artists are, which can’t be very good for artists, but it helps me wake up happy.

If you weren’t working on Switch Video, what would you be doing?

I’d be spending more time with my kids.

I haven’t been on Twitter much lately, so I can’t answer this one. I’ll be able to in four weeks!

Meagan, who works at Switch, is a bit of an outdoor fanatic and gear nut. She’s an ambassador for Oakley; when she goes hiking, she makes videos about the things she likes to bring on a hike. She takes more things hiking than I own, and she could live on them for months!

Yesterday, my girlfriend and I made a spoof video for her, talking about all the things we don’t bring when we go hiking in the snow, things like maps, gloves, hats, and water. We focused on being disoriented and making sure we couldn’t find our car. We thought we were really funny and laughed so hard. We are not that funny.

I don’t have a hero. There are people I respect, but I don’t have a hero. What’s a hero? Google says, “The chief male character in a book, play, or movie, who is typically identified with good qualities.” Males only? “Hero” seems like an old concept to me, where men are extraordinary and the rest of us are mere mortals. I don’t buy it.

Tell me about a time you failed and what did you learn?

I fail often and I am very stubborn, and those traits can work well together. Over the past five years, I’ve failed often and then tried again. I’m on a streak right now and have managed to pull it together, failing slightly less often than I have been successful.

I started this business very early on in this industry, and I made most of my mistakes early. I needed to get in early so I could make my mistakes before we had much competition!

What would you have done differently in your personal life?

I would not have started a business – it’s killer for your personal life. The sacrifices I have made are huge and have affected everyone around me. I, of course, am betting that that will turn around and I’ll have more time with family and friends in the future, based on the lack of time I spend with them now. Time will tell, but I always tell my girlfriend it’s just around the corner. She no longer believes me!