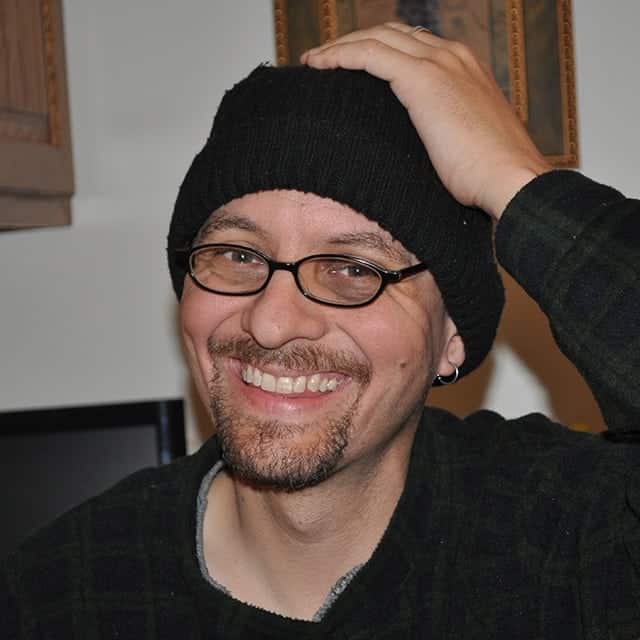 Jay Haase grew up in northern Minnesota. During his childhood, his family moved around a lot. Jay remembers switching schools as being a bit scary, and like many of us remembers the feeling of “not quite fitting in”.

It was the mid-seventies, during 7th grade, when Jay first encountered computers. It took only one game of “Oregon Trail”, on an old Teletype with an acoustic coupler and yellow paper, and he was hooked for life.

Jay used to sneak into the computer room before school, jimmying the lock with ruler – a trick he learned from his grandfather. He even created a series of fake hall passes to be able to regularly leave study hall to go to the computer room.

His love for computers and technology lead to a B. S. Degree in Computer Science from Moorhead State University in Minnesota. Jay spent the last year of college as a single parent of two children. He joined the National Guard and worked two jobs at the university, to help pay for college and childcare.

Some sixteen years later, Jay had become a Senior Technical Services Manager at a large IT consulting company. His youngest daughter was graduating high school, and Jay could see the probable path of his life: more management positions, preparation for retirement, a few fun vacations, a nice house and then, hopefully a comfortable retirement. These thoughts, combined with experiences of traveling to base camp of Mt. Everest, Nepal, India, and China led Jay to decide it was time to change his life. He got online, and submitted an application to the Peace Corps.

Six months later, Jay was on his way to Namibia, Africa to begin his Peace Corps assignment. Jay spent two years living in a “location” in Southern Namibia. Locations are urban living-areas that were designated for non-whites during apartheid, similar to American ghettos. During this time, he taught computer skills to disadvantaged youth. He volunteered for an additional year of service in Namibia as a volunteer leader. He lived on a subsistence farm in Northern Namibia and provided HIV and AIDS education to adults and schools.

At one point, during his Peace Corps service, another volunteer asked Jay to build a database to help her track information about orphans being served by a small non-profit. Jay built a database, and eventually the database was used by many organizations across southern Africa. This database led to consulting gigs with the Namibian government to build a series of new databases relating to orphans, vulnerable children, foster parents, and preschools.

I am working on two projects at the moment: a new iOS game called Garden Gnomes, and a small database to help social workers in Namibia report statistics on the children they serve.

Where did the idea for Wire Car come from?

During my time in Namibia, I realized many small organizations needed a lot of help gathering data about the people they served, and then reporting on that data. The reporting is essential, because it can help organizations get additional funding. I also realized they small organizations could not pay for the IT services needed to provide tools to manage their data. So I created Wire Car with the idea of providing free or very lost cost IT services.

Where did the idea for Lost Lamppost come from?

Obviously, Wire Car’s business model is not profit based, and I still need money to support my family. My son-in-law is a super creative person, and I thought, if I created a game that he would want to play, it would probably sell. So together we founded Lost Lamppost with the idea that it could eventually support our families, and let me continue my work with Wire Car.

So far we have not made any money. Our game just went live in Apple’s App Store on December 9th 2012. The game is currently free, because we are trying to build its user base.

Programming, emailing, cooking meals for my family, going to Aikido practice, watching a little NetFlix, and playing some Xbox.

I like to use the back-burner approach coupled with meditation. I hand over a problem to my mind’s back-burner and let the problem ferment for a while. Then usually during breath meditation sometime later, an answer will pop into my mind.

Fractional employment and the cloud.

I worked in a bread factory, pushing uncooked loaves of bread into a large oven. It was long and tedious. I learned not to watch the clock.

I keep telling myself: I will succeed.

I started making this cool, big, iPad game called Magika. The graphic artists quickly ate up all my time and money, and I was unable to finish the game. I bit off more than I could chew at the time. I overcame that problem by starting a new, much smaller game.

Create an up-scale travel agency that interviews clients to find out their fears, dreams, likes and dislikes, and then uses that information to create an awesome surprise, all-inclusive super vacation.

I would change myself. I would become better at loving everyone.

I broke Peace Corps rules, and owned a junk car during my last year of service. A car that caught on fire more than once, and one time, during a small fire in the dash, the steering wheel came off while I was driving a carload of old women to a wedding.

I recommend reading the book: Don’t Sweat the Small Stuff. It changed my life.

When my son asked someone how do you say “the” in Japanese.

My hero is Gandhi, because I truly believe if you want to change the world you must first change yourself.

What has helped you to succeed?

Two things: I have found being focused, truly focused on the job I am doing, even if I don’t like the tasks at hand leads to recognition, and not staying at a company that has values I do not agree with.

What do you feel was the most important decision you made in your life?

When I decided to quit worrying about risks and what other people thought and just follow my heart.