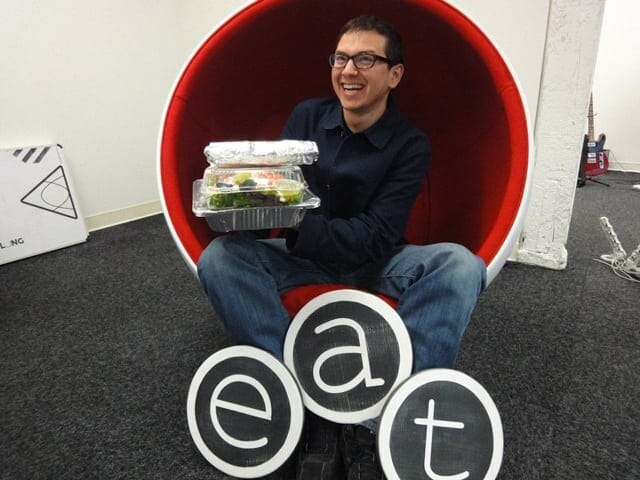 Arram Sabeti is the founder of ZeroCater, a startup that makes it easy for companies to feed their employees. Arram became obsessed with tech startups when he was 20 years old and as an experiment, he decided to totally commit to the goal of building a successful technology company. He sold everything he owned and moved to the San Francisco Bay Area. After nearly running out of money, he did a 2-week stint as an ice cream scooper at Ben & Jerry’s before landing a job at Justin.tv. As the fifth employee of a rapidly growing company, he was responsible for everything from testing software releases to ordering lunch. Eighteen months later, having seen firsthand how startups really work, Arram heard some friends complaining about their company lunches. Realizing that ordering lunch was his own biggest pain, he offered to handle their lunches for them. Within 3 months, enough companies had signed up for his service that Arram was able to quit his job. Today, ZeroCater has a staff of 15 and feeds nearly 200 companies throughout the Bay Area. They’ve raised $1.5 million from prominent investors and plan to expand the service nationally.

Hiring. We’ve finally started to catch up with the demand. We’re very slow to hire, so there was a time when demand got ahead of hiring and our support team was working 12 hour days to try to keep up.

Where did the idea for ZeroCater come from?

It was completely organic. At my last job I was the catchall for tasks and ordering lunch happened to be one of them. It was the most painful of the jobs I had, so I knew it’d be good to start a company that took away the headache.

It varies pretty wildly. I try to visit several customers a week to see their experiences first hand. I spend a lot of time talking to people in the company to see how things are going and if there’s anything they need. I also talk to our account managers about how we can improve our tools so they can better serve our customers. Then I turn their feedback into development tickets and prioritize them for the development team.

Probably doing everything manually in the early days of ZeroCater. The spreadsheet I used to manage orders grew to 500 columns before we replaced it with software.

I’d hire help sooner. I tried to do it all myself for over a year, which in retrospect was a mistake that cost me a lot of growth.

Get yourself in an environment where starting a company is normal and join a company with strong founders. For me, that was moving to San Francisco and joining Justin.tv. The experience I got there I couldn’t have gotten anywhere else.

Something that makes the delivery part of food delivery easy. We think TacoCopter is onto something.

I’m very optimistic about the future of general artificial intelligence. I just wish it would happen sooner.

How to Get Rich by Felix Dennis. The main lessons are that startups take determination and starting a company is an emotional roller coaster.

The album Urban Hymns by The Verve and Spanish Caravan by The Doors.

To be honest, I don’t spend much time on Twitter.

Around 10 minutes ago, thinking about how I got started in all of this.

I have several. Of the people I know, the founders of Justin.tv, especially Justin Kan and Emmett Shear, have consistently impressed me with their ability to make things happen.