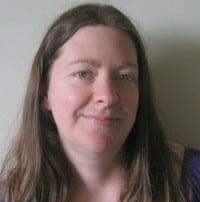 Beth Winegarner is a writer who has spent much of her adult life working as a reporter and editor for San Francisco Bay Area newspapers and national music publications, including The Lion’s Roar, The Oak Leaf, The Daily Californian, The San Rafael-Terra Linda News Pointer, The Redwood City Daily News, and The Examiner. In addition, she has freelanced for The San Francisco Chronicle, Addicted to Noise, Bay Area Music,Bikini, ROCKRGRL, Mid-Atlantic Geomancy E-Zine, and Crescent.

Beth Winegarner also has published four books, including “Read the Music: Essays on Sound,” “Sacred Sonoma,” and a novel, “Beloved.” Her poetry has appeared in a variety of literary journals, such as Tertulia, Terrain, Centaur, Bardsong, Lime Green Bulldozers, New Verse News and Eat Your Words.

She currently lives in San Francisco with her partner and daughter.

I’m working on a guidebook for parents that will explain why some teens are deeply interested in heavy metal music, violent video games and the occult — and how these interests can be a healthy part of growing up. I’m trying to bust the myth that they cause teens to become violent toward themselves or others.

One is crowd-funding. There are a couple of online resources, including Kickstarter and IndieGoGo, where artists and writers can post a description of their project and gather donations that will go toward funding that project. There aren’t that many artist grants available to begin with, but now that the economy has hit rock-bottom, those dollars are especially scarce. I hope that as these sites take off, more will come in to give creators a diversity of crowd-funding websites to choose from.

Another is the legitimization of online literary magazines. For a long time, it was assumed that if you didn’t get published in a dead-tree journal, then it didn’t really count. Again, the economy has not been kind to print journals — their costs are going up, subscriptions are dropping off, journals have fewer pages and that creates fewer opportunities for writers to get published. But online publishing is incredibly cheap. Editors can still pick the best of what they receive, but they can pick more of it. That’s good for writers, and it gives readers more to choose from.

A third trend that I’m thinking a lot about, although it relates less directly to my work, is the resurgence of interest in foraging for one’s food. On the upside, it’s teaching people that there are edible plants and other sources of food all around them, not just in the market. On the downside, it’s being treated as this hip new thing, when really this is knowledge that humans ought to have — and have had, throughout almost all of our history. I do hope to write about this trend sometime soon.

I have a toddler at home, so I don’t get many chances to get things done unless I hire a babysitter — which I do, for an afternoon a week, sometimes two. Ideas come all the time while I’m going about my day being a mom. Unfortunately, the time I spend thinking about them is late at night, when I’m trying to sleep! I also spend some time talking to friends, online and in person, who may have suggestions or resources that will help. This distillation process means that when I do actually get time to sit down and work, I’ve done some of the thinking already and have figured out some of the practicalities of getting them accomplished. A lot of very scattered time goes into the planning, and then I can sit down and work more efficiently.

Don’t get a job doing something you’re not knowledgeable and passionate about. About five years ago, I quit my job at the newspaper I’d been at for about seven years. I just needed a change of pace. I quit because I had another journalism job lined up, at an online magazine that seemed like a great place to work but focused on a topic I didn’t care that much about — it was interesting, but it just wasn’t my cup of tea. I figured that as I started working there and writing about it, I WOULD become interested, but it very quickly became obvious that I didn’t belong there. The process of leaving was somewhat traumatic for me, and it took a while for me to find another stable job.

A couple of books have been my Bibles for style-related questions: the AP Stylebook for journalism and the Chicago Manual of Style for writing books. They tell you how to use specific words, how to use punctuation, whether to spell out numbers and so on. Many writers don’t understand how important consistency is for the reader — it’s like driving on a road where the mile markers and exit signs are really good, and you’d be lost if they weren’t there.

I couldn’t be as productive or prolific as I am without my computer and the Internet. I know plenty of people wrote books without these things, but they make life so much easier. I can check ideas against websites or Wikipedia, write myself to-do list notes at 2 a.m. that will pop up with reminders the next day, and store many backups of a project I’m working on in case one of them is lost or damaged.

I think it would be fun to write a memoir as a series of restaurant reviews, in thestyle of Yelp reviews. I don’t think you could actually use something you wrote on Yelp, because I believe their terms of service say that they own what you write for them. But you could string together an entire life story — or a period of a year or two, say — based on what restaurants you visited, with whom, how the meal was and what was going on in your life the day you ate there. Provided both the restaurants and the time period of your life were interesting, I think it would be a great read.

I’m a big fan of writing that incorporates online media, particularly social media. One of my favorite stories is an award-winning piece that was originally written and posted as a personal ad on Craigslist. I think you could do a whole book based on Twitter posts and dialogue, too. But I haven’t had the wherewithal to do it myself.

What motivates you to write?

In terms of journalism, and my nonfiction books, I’m motivated by the desire to help people, to educate them, to show them something they might not have otherwise known about. Especially as a reporter, I felt like I had a responsibility to use my access to elected officials and other public figures in order to find out what the public needed and deserved to know, and then to write about that in a way that made it easy for the public to understand. My current book is about trying to turn back the clock on a lot of misinformation that I fear is divorcing kids from the interests that may be the most soothing, healing and cathartic to them.

What hobbies have changed you in unexpected ways?

About seven years ago I started studying kenjutsu, which is a style of Japanese swordfighting. I’d never been very athletic in my life, so it took a while just to learn something about basic body mechanics, let alone sparring at slow speeds with anyone. I had to stop around the time I got pregnant, but by then I’d also taken up doing a lot of walking, and in pregnancy I started practicing yoga — something I still do at least twice a week. I just recently realized that, as someone who wasn’t athletic for the first 30 years of her life, I’ve been dedicated to some form of physical activity for almost seven years. And the things I’ve chosen to do take a lot of focus and strength, which have given me a different kind of self-confidence that I think helps keep me grounded and motivated in other areas of my life, including writing.