Bruno Pieters – Founder of Honest by 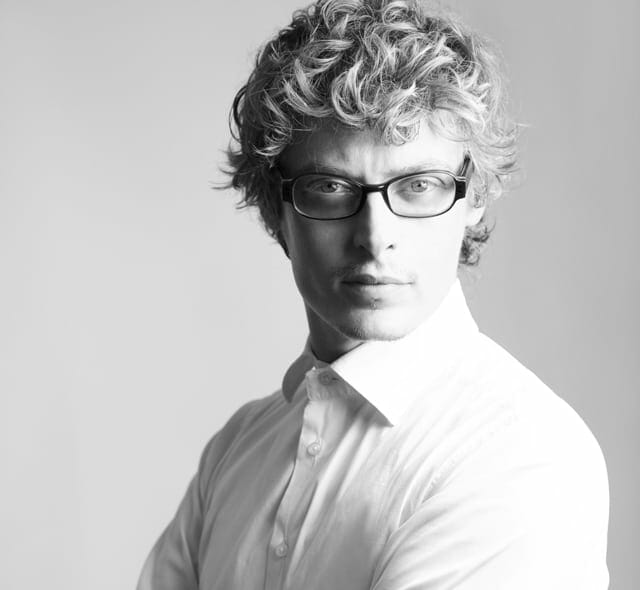 [quote style=”boxed”]Try to remember why you are doing the work you are doing. Ask yourself every day: is this what I want? Life is short and unpredictable.[/quote]

Bruno Pieters is a Belgian fashion designer and art director highly regarded for his avant-garde creations and sharp tailoring. In 2012, after a two-year sabbatical from the fashion industry, he launched Honest by.

Pieters was born in Bruges, Belgium in 1975 and trained at the Royal Academy of Fine Arts in Antwerp. He graduated with a B.A. in fashion design in 1999 and went on to develop his craft by working with designers including Martin Margiela, Thimister and Christian Lacroix in Paris and Antonio Pernas in Madrid. In 2001, he presented his first couture collection during Paris Fashion Week. The next year, Pieters debuted his ready-to-wear collection.

Exhibiting both mens and womens collections in Paris, Pieters soon became a critic’s favorite. Suzy Menkes, legendary editor for the International Herald Tribune, described the designer as “an intriguing new talent.” Pieters was also a winner of several awards, including the Swiss Textile Award in 2006, the Andam Award from the Pierre Berge and Yves Saint Laurent Foundation in 1997 and the Elle Style Award in 2008. His designs are best described as architectural, highlighted by intricate tailoring and constructed lines. Style.com described the “beauty of the clean, precise lines of Pieters’ tailoring” to be a result of his “real devotion to craft.”

In 2005, Pieters was named creative director for the men’s line at the Belgian brand Delvaux, Europe’s oldest leather goods company, a role which he held until 2009. In 2007, Pieters became an art director for the avant-garde line Hugo by Hugo Boss, beginning a successful 3-year collaboration. In addition, Pieters continued to expand his own label, launching eyewear and homewear.

In 2011, he decided to announce the retirement of his own label.  Pieters gave a significant part of his archive to the Momu Fashion Museum of Antwerp, while selling much of the rest and donating the funds to SISP, a children’s charity in Southern India. He spent his sabbatical traveling in India, but found time to work on a collaboration with the brand Weekday, owned by H&M.   His experiences in India had a radical affect on his outlook on life. He became increasingly concerned about the environment, animal welfare and children’s causes. In January 2012, Pieters returned to the fashion stage with a new concept and brand. An entrepreneur as well as a designer, Pieters is creating a new model for the fashion industry and for other industries worldwide. Honest by is the first company in the world to offer price transparency to its customer and to make its entire supply chain public.

I’m working on honestby.com, which was launched at the end of January. Honest by is the first company in the world to share the full cost breakdown of its products. The word Honest refers to the way in which the Honest by store operates, with a 100% transparency policy. The concept behind Honest by offers other fashion designers a public platform to share their own design processes, utilizing the extensive research Honest by has already conducted on organic fabrics and suppliers.

Where did the idea for Honest by come from?

It is something I wanted as a customer. I love shopping but at the same time, I am very aware that every purchase I make has consequences.

I feel that brands are still not transparent enough in the way they communicate about their products. For me, buying is like voting; I like to know what I’m supporting because I truly believe all the problems we face today are related to consumption. I see it as my duty to be the change I want to see in the world, as Gandhi once said.  For that, I need to be able to shop in a 100% transparent way.

I don’t have a typical day. Every day is different and unique.

I’ve learned to be patient and let the idea grow until it feels right. I know it’s right when at first it seems absurd or impossible.

The disappearance of trends.

Having a job is a privilege. We all need to make a living. I think the worst thing is not having a job.

When I worked for other brands, I learned about myself and others. What we call work is basically people interacting and either believing they are doing something that needs to be done or doing something they want to do.

I would not change anything, otherwise I might not be doing what I’m doing now.

As an entrepreneur, what is the one thing you do over and over and recommend everyone else to do?

Try to remember why you are doing the work you are doing. Ask yourself every day: is this what I want? Life is short and unpredictable.

I wouldn’t change anything; life is prefect as it is. We just need to become aware of that and treat it with love and respect.

A secret is all we are.  A secret we know by heart.

I have no favorites. I love them all.

A New Earth: Awakening Your Life’s Purpose by Eckhart Tolle because it has the power to turn you into You.

Anything with an M these days, Mozart, Michael Jackson…

Someone asked me recently if I thought sustainability is a trend that will last. That was funny.

A few weeks ago I laughed so hard that my stomach hurt. I was drinking red wine with a friend and we were both hiding our teeth during the entire conversation. After a while, we noticed we were doing the same thing and laughed a lot. It’s always simple things like that.

Anyone who is able to say they love themselves.

Would you like to develop Honest by with a business partner who has proven to be successful, is extremely concerned about the environment and is conscious about life?

What is happiness to you?

A state of mind.