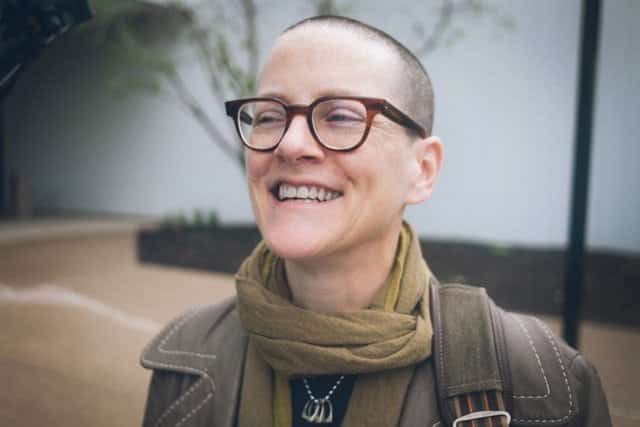 Colleen Wainwright is a writer-speaker-layabout who started calling herself “the communicatrix” when she hit three hyphens.

She spent 10 years as an award-winning TV copywriter crafting ads for brands like Wheaties®, Gatorade® and Jell-O®, and another 10 acting in them for cash money. Since deciding she’d blow her brains out if she had to sit through one more meeting about which way the bears danced around the cereal box, she spends most of her time teaching other creative souls how to talk about what they do in a way that wins them attention, work and satisfaction–and the rest of it horsing around on the Internet.

To celebrate her 50th birthday, Colleen used herself as a guinea pig to test-drive her theories on social media and attention, raising more than $50,000 in 50 days for WriteGirl, a local Los Angeles nonprofit benefitting high school girls. She is currently hard at work avoiding several looming deadlines.

As always, I’m working on too many things, which means I’m not working on any of them. Focus is a perennial issue for me.

One project I can (sort of) talk about is a collaborative consulting/teaching venture with an old friend from high school, who, in one of life’s weirder twists of fate, became a cousin by marriage a few years back. After some circuitous turns, she ended up in book publishing PR and I ended up in marketing. We both love hanging out and working with creative people, so finally, one of us said, “Eureka!” and the other bought a plane ticket.

I’ve also got a half-finished book proposal that a few people have said they’d like to see and a 3/4-finished essay that I hope a certain magazine editor will want to see. And I’m still working on fulfillment for 50-for-50, a massive fundraiser I did last year. It is a lot easier to make promises than it is to keep them.

See? Too many things!

Where did the idea for “the communicatrix” come from?

Ten years ago, I became so ill I had to be hospitalized; while recovering, I had a full-on “white light” experience and knew it was time to start writing again.

As to the title itself, I’ve always had trouble settling on a cohesive way to describe myself, and “communicatrix” solved a lot of problems. It let me stick my jumble of expressive interests—writing, performing, drawing, speaking, and design—under one umbrella. And of course, it’s a word you just can’t take too seriously–like me, or this answer, or most things in life, when you get right down to it.

Alas, I’m as bad at routine as I am at focusing. So much so that I suspect they are closely related. But when I’m not traveling, my life consists of a lot of reading and writing, punctuated by food prep, incredibly long walks, and compulsive Netflix streaming.

Noodling, noodling, noodling! I do a ridiculous amount of private pacing, scribbling, brain dumping, and so forth. Then there’s the test-driving in public, via emails, conversations with colleagues and clients, workshop versions of talks, etc.

One particularly fruitful idea lab came out of playing with the now-defunct Google Wave. For 2.5 years now, my friend Dave and I have been conducting this strange, sprawling, online conversation. Sometimes it was like a two-person support group, and other times it was like sending each other letters from camp. Looking back, though, I can see how it became a kind of idea incubator. Notions bubble up, and we’re able to give them shape and let them breathe and change organically—a big thing for a control freak like me. Dave once joked that it was like having the most awesome blog ever, written entirely for you. I think that’s apt.

Honestly? Paleo! I’m on a similar regimen called the Specific Carbohydrate Diet to control a chronic digestive illness, and now that everyone is ditching grains and sugars, it’s getting much, much easier for me to eat well and safely, outside of my own home.

I was a waitress at a coffee shop for exactly one night in my teens, and I learned 1) that I am not cut out for food service, and 2) always tip big.

I’m assuming this question comes with an implicit “armed with the knowledge and/or skills you have now.” With those things in place, I’d have tried more, sooner. I gave advertising way too long; I knew I was unhappy a few years in, but I was lazy and scared. And, since the choices you make build your choice-making muscles, I created a lot of unhelpful ruts and bad habits. I learned from everything, though, and I’ve mostly made my peace with it, so I’m cool with my dumb-ass choices.

I make mistakes. My only suggestion is that, unlike me, you try to make each one only once.

I was incredibly isolated when I launched my design business, and all my contacts were in theater—an industry that’s not known for high pay scales. So I threw myself into the internet, aggressively seeking teachers and fellow travelers. I volunteered for any writing gig I could get, paid or unpaid, wrote tons of my own content, and read even more. I reached out to people, commented on websites (this predates social media by a bit), and attended workshops, meetups, BarCamps, conferences, and anything else I could get to in order to meet people and learn in person.

Basically, I extended myself wherever I could, endeavored to be humble, useful and honest, kept an open mind, and tried my best to follow through on my promises. My dad, who was a new-business guy for most of his career in advertising, always said that the secret to success was maintaining good relationships. He did it with snail mail and the phone, and I do it with email and the internet, but it boils down the same thing.

Empower women and girls. I’m sure there’s a massive laundry list of actions needed to make that happen, most of which I’m woefully unaware of. But securing their civil rights and physical safety, stripping organized religions of tax-exempt status and other legal and financial protections, and making birth control and basic education as available worldwide as aspirin is here in the United States would be a good start.

I have an unhealthy obsession with Steve Coogan.

(Honorary mention goes to Twitter, which is the best news feed ever.)

On Writing Well by William Zinsser. It’s an exceptional book on expressing ideas. And what’s the point of an idea if you can’t express it? Additionally, although I’m sure 973 people have already (and rightly) recommended it, I like The Elements of Style.

@ebertchicago is a tsunami of great links and good cheer.
@jayrosen_nyu is my favorite writer/thinker on the nexus of journalism and new media.
@kissane provides terrific links, has a kind soul, and is a super-smarty-pants about all things content-related.

Last night, while hanging out with a group of four ladies I’ve been getting together with regularly for almost 10 years now. Ordinarily, I’d have laughed far more recently (as I laugh a lot), but it was a late evening and I’m dragging this morning.

I admire many, many people, and look to them—often in an upward fashion—for inspiration and guidance. But I’ve never had a hero. I’m sure this speaks to some deficiency of my own character.

What’s the best way to get attention?

Spend 1,000 times more energy and effort making something awesome as you do talking about it. And be patient—nobody likes a nudge, especially now.