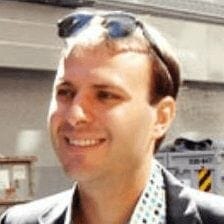 Dan is the  founder of Namesake, a new online business community centered around conversations.  He is an entrepreneur and technologist who specializes in designing social and communications software. He also works with sophisticated optimization algorithms, user data analysis, and various economic tools.

Prior to Namesake, Dan was co-founder of Ad.ly and co-founder of Newroo which was acquired in 2006 by Fox Interactive Media/NewsCorp.  He then served as VP, Technology at the Fox Audience Network as it grew from zero to the 5th-largest ad network.  In 1999, he founded Corridor, inventing what is arguably the first modern social network.

He was previously a researcher at the National Institutes of Health and at the Brown University Computer Graphics Group.  He has also consulted for a variety of companies, including Cyberkinetics, which developed the first Brain-Computer Interface.

At first, “online community for professional conversations” may sound a bit strange, but I think it’s a really important idea.  The way people end up making things happen–working together, building projects together, and the like–is by knowing about each other and building trust.  The way people get to know each other and build trust with each other is through conversations.  You talk about things you know, help people out, and they begin to see that you’re helpful and knowledgeable about something.  When it works, it’s magical.

There is, of course, a lot more to it, but the IdeaMensch readers who want to find out will have to join the Namesake community…

1. Rise of entrepreneur culture and global capitalism to solve problems

As recently as the 1960s and 70s, the world’s situation looked bleak.  Most of the world’s population lived on less than a dollar a day and it looked like there was little hope of that changing; the worlds population was at 3 billion people and was rapidly growing–and we though we wouldn’t be able to feed all the new people.  Yet, here we are: Huge swaths of the world population’s living standards have risen immensely (yes, there’s still lots poverty and problems, but it’s night-and-day from what was expected).  We are at almost 7 billion people and aren’t having mass starvation.  Why?

Innovative ideas changed what people are capable of.  The green revolution and modern agriculture, global capital markets, the and Internet.  We can find solutions and distribute them globally.  In particular, China and India have joined in economic liberalization, lifting billions of people’s quality of life.  I see this trend continuing both at the micro-scale, and macro-scale.  I can’t imagine anything more exciting.

2. Convergence of Hollywood and the Technology Industry

Silicon Valley is great at building communication tools–things that put people in direct, one-on-one contact.  Technologists are awful, however, at storytelling.

Hollywood gets storytelling–they can convey emotions and shared culture to the whole planet.  They are, however, bad at communications tools and communities.

There are a group of people who have grown up as part of both cultures who are starting to create things at the intersection.

3. The merging of the physical and the virtual

Our kids aren’t going to understand how we drew a distinction between the “virtual” and the “real”.  Technology is going to be woven so deeply in to our everyday lives that nearly everything will have a software aspect.  It only feels separate because we’re so bad at it today.

Being an Engineer requires the arrogance and self-confidence to see problems and believe that–while you don’t know them yet–that solutions exist and that you can find and build those solutions.  So, I spend lots of time seeing things in the world, both small and large, and thinking, “I could change that; I could do better”.  That’s the vision part.  It’s what gives you the confidence to try.

More importantly, you have to be humble.  Whatever solutions you first think of, not matter how clear your vision, are wrong.  You have to try things and put them out there in the world and see how they work.  It’s particularly true in my field of social software: It’s amazingly hard to guess how people will interact with eachother using new communication tools.  You have to build quick prototypes and get real customers using them.

I used to have grand visions and try to build them.  But I’ve learned that only constant iteration really works.  Every big idea that works grew out of a small idea that worked.

Being surrounded by great people doing great things.  My business partner, Brian Norgard, is one of the greatest entrepreneurs I’ve ever met.  The team I work with is amazing.  Ever day I discover new things and am blown away by the community on Namesake.  And, in my personal life, I’m lucky to spend time with similarly wonderful people.

Anyone who lacks inspiration should seek to surround themselves with such people.  Everyone around me is operating at such a high level, I feel like I have to keep up.

I make mistakes all the time, every day.  More mistakes faster means more successes faster.  It really is too bad that we stigmatize failure so much.

So, my biggest mistake was, early on, trying to doing way too much way too soon.  You can’t start with a perfectly-realized vision.

Be sure to include carbon offsets.

Book: I love short-but-wise books that, while you may not fully agree with them, shake up your worldview.  One that comes to mind is Finite and Infinite Games by James Carse.  The title makes it sound like a game theory text–like you’ll be hearing about zero-sum games, Nash equilibria, and so on.  But, while it uses some terminology from that world, it’s something different.  He reframes a lot of activities people engage in as games, where we are the players and people’s actions and choices are moves.  He then distinguishes between finite games and infinite games.  Finite games have a beginning and and end.  The goal is to win.  Infinite games, on the other hand, have no end: The goal is to keep playing.

Tool: UNIX is the perfect software tool.  It’s actually a collection of small tools, loosely coupled together.  Each part of it does one thing and does it well.  By stringing together all these little tools, you can make it solve almost any day-to-day task.  A bit like how just four simple DNA bases give rise to the richness of all life on the planet.

Who would you love to see interviewed on IdeaMensch.com?

What is the key to building social software?

The software is only a tiny part of it.  The community and the software evolve together.  It’s all about getting the right people to participate and to participate early, when there’s nothing there and it feels a bit like shouting in to the wind.  New people joining a community see who the existing people there interact, so it’s important to build a strong culture where everyone knows why they’re there and why it matters.

What do you do away from the computer?

My favorite thing is connecting people who should know each other.  I love it when friends and other people I meet hit it off.