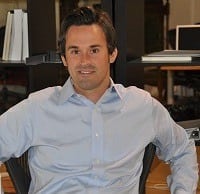 When Daniel Carroll founded Wealthfront in 2007, he started a movement towards transparency in investing that continues to evolve as Wealthfront moves into the investing mainstream and makes it easy for the mass-affluent to invest well.

Believing that mutual funds are broken and hedge funds are for rich people, he assessed that no one was looking out for the small investor. Daniel determined to create a marketplace for investing talent where everyone has access to institutional grade asset management and allow every investor access to better returns, transparency and insight once only available to wealthy individuals.

He is a firm believer in active management and that it is possible to outperform the stock market through manager selection and asset allocation.

Dan is an avid investor himself and has been investing in stocks since the age of 15. During the tech boom of ’99, he turned his hard-earned caddying money into trading profits funding most of his college tuition.

Making it easy to invest well. The science of investing is a complicated beast yet you can’t argue with its impact on your future. Many people spend more time picking out a plasma tv than worrying about their investments. Performance matters and that is what we are trying to make front and center at Wealthfront as we help people manage their investments.

–       The Internet’s disintermediation of archaic and broken industries– yes, it is 2011, and there are still industries ripe for innovation via the internet like healthcare, education, and financial services.

–       Continuation of number one…The Cable war – I think it will be fascinating to see how the war between the major cable providers- Comcast, DirectTV, Dish, etc vs. the likes of Amazon, Netflix, Hulu and Boxee will play out. Specifically, I think Netflix’ recent buy of original programming in “House of Cards”  and streaming rights to “Mad Men” should start to send chills to the folks over at HBO. I don’t know about you, but I would sure rather pay $7.95 a month than $25. HBO’s subscriber numbers are down of late. Go figure.

–       Private marketplaces like SecondMarket, Sharepost, etc.- I would consider myself a sophisticated investor as it pertains to the stock market, but I also feel that I have somewhat of an advantage as it pertains to investing in private companies. I want an easy way to invest in private companies like stocks. For example, when Verifone recently went on that smear campaign of Jack Dorsey’s Square, I am not sure if there was any better indicator that Square is going to be huge. A big incumbent worried about a small startup? Really? I can just see the Verifone CEO throwing stuff around his office wondering why he can’t crush “that little dork that started Twitter.” (Jack, no offense…I enjoy wearing Prada suits too).  To me, that was a sign that Square was well on its way to winning.  Congrats to Square for their recent deal with Apple.

Stop thinking and start doing. Think. Code. Push. Iterate. Fail. Iterate again. Fail again. Move on. Rinse and repeat. Hire smart people and don’t accept mediocrity.  I think it’s also very important as an entrepreneur in bringing ideas to life to have passion for what you are doing. Entrepreneurs start companies for two reasons: 1) to make money 2) to change the world. I think entrepreneurs that fall into camp number two have an advantage in that they will be more willing to do the ugly stuff it takes to succeed. It isn’t always pretty building a company. In fact, a lot of the time it is downright ugly, but you have to be willing to fight for every inch and hustle harder than the other guy to succeed.

I get my inspiration from people at the top of their games in all walks of life whether it be entrepreneurs, athletes, movie stars, political figures and even rap stars. Successful people tend to exhibit similar traits of perseverance, determination, and are masters of their craft. The most important thing is the buck stops with them, and all the pressure is on their shoulders to come through. They want to take the last shot in the game.

I tend to not trust people by nature and make them prove their worth to me. This isn’t necessarily a mistake but something I would like to improve upon.

The World’s Newspaper, in your native tongue. I know there are basic translators out there, but I want to read the local newspapers of different countries in my native tongue all in one place. . Someone needs to create an aggregator for the world’s newspapers. For example, I want to read the local Japanese newspapers’ coverage of the Earthquake in Japan or the local French press’ opinion on their leading the initiative in combating Colonel Qaddafi in Libya. It’s more personal. More real. I would pay for that.

Financial Times – the smart, sophisticated man’s paper.
Flipboard- the articles shared by people you follow on Facebook and Twitter.
Techcrunch- Sarah Lacy is topnotch, Arrington’s rants are well, Arrington’s rants and Jason Kincaid’s Cribs are great.
Businessinsider – becoming a gossip rag…not always a bad thing.
AVC – Fred Wilson has at least one homerun piece every week. Must read for every entrepreneur.
Chris Dixon- Chris has a good understanding on building companies having been on both sides
Jason Calacanis – I enjoy his entertaining and controversial views. You can join his email list.
Bill Gurley – always on the right side of the debate.

As an entrepreneur, it is tempting to read every book you can get your hands on to help you navigate the world of building a company…but it is also nice to escape once in awhile and read good ‘ole literature. So of course, I have read the likes of Christenson, Blank, and Pink, but I am going to recommend an old one, Bonfire of the Vanities…why? Because it is simple, classic literature!

Boring answer I know, but everyone talks about how it is so much easier to start a company nowadays than it was in the past, and most of the debate centers around the low cost of computing with Amazon web services being a startup’s best friend. What isn’t talked about is the time you can save with search engines to gather information that used to be library trips back in the day. Or even worse, Encyclopedia Britannica. Don’t you miss that salesmen coming to your house every week trying to sell you encyclopedias? Besides, what bootstrapped startup would have heard of LegalZoom without Google anyway?

They make better fitting men’s clothes and are killing it. Thanks to Bonobos, my wife can actually slap my butt now and doesn’t get material ( I used to wear my pants like Kris Kross).

How did your past life as a bond trader prepare you for entrepreneurship?

Ups and downs. Highs and lows. As a bond trader, it is typical for your days to end in many thousands up or down.

You might look at your screen at the end of any day and see yourself down an inordinate amount of money or up a normal person’s salary. The key is to balance the good and the bad. As an entrepreneur, you have to be willing to go twelve rounds as Mike Tyson’s punching bag because you know that those times of celebration, those new customers, or successful deals more than make up for the anguish. They conquer it.

Who is going to win the NBA playoffs?

The Chicago Bulls of course. If Derrick Rose was on FourSquare, he would be the mayor of dominating (in my best Zoolander face).