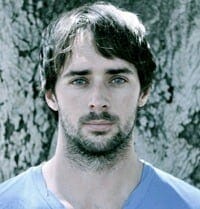 [quote style=”boxed”]I wake up between 5:00am and 6:00am to run 12 miles, save two kittens on the way, work on restoring an 18th century painting and then eat a macrobiotic breakfast.[/quote]

Charlie Capen is co-founder of HowToBeADad.com , an entertainment site and dad blog for “parents, soon-to-be parents and people who have no desire to procreate, whatsoever.” The site features running commentary and visual diagrams on the idiosyncrasies of fatherhood, parenting missteps and his own adjustment to having children. In the three weeks since the website’s launch, HTBAD’s content viewership has jumped over 11,000%.

To understand a dadblogger, you have to understand their upbringing. Born somewhere in the hills of San Francisco, Charlie grew up surrounded by arts and media with parents in radio and literary fields. His father was a well-known radio disc-jockey (Stephen Capen) whose exploits took him to K-Rock in New York where he replaced Howard Stern when Howard shifted to the morning format. His mother, Regional Vice President of Entercom (one radio five largest broadcasting companies), would go on to raise two sons on her own while managing entire hemispheres of radio.

In addition to creating and providing content for “How To Be A Dad”, Charlie is probably most well known as a film/television actor ). His journey to Los Angeles started at 19, when he penned a list of his loves, talents and his bucket list of goals. Upon completion of the list, he quickly realized no job existed that could fulfill all these aspirations and penchants. Except as an actor.

He dashed his plans and moved to Los Angeles.

Since then, Charlie’s recent projects include two episodes on ABC Family’s “Greek”, two seasons on FILMAKA.com webseries “Starlet”, several viral videos (Move Kills Mii, Zippo, iPad2) and a film he co-wrote, produced, scored and acted in, 3 Things, a selection at Cannes SFC 2010 and other festivals.

Charlie’s obsession with social and viral media (only deepened by marketing “HowToBeADad) coupled with his creative aspirations placed him in the unique position to start his own social/viral marketing company, which will launch Fall 2011. His viral videos have reached over 1.5 million viewers and his online branding has seen 4x increase of sales for his clients.

Charlie is no one trick pony and hopefully, as he puts it, “This pony will grow wings and a horn to become the unicorn that would fly. God, I hate talking about myself.”

Well, in addition to trying to sleep more often and not act like the character from “Memento”, I’m working to make my dadblog something greater than the sum of its parts. When I approached my co-conspirator, Andy Herald, on doing a blog about fatherhood we both agreed that it wouldn’t be a “just for dads” endeavor. Parents have been around since people began and there are a ton of clichés as well as a cultish reverence for parenthood that I certainly felt beforehand, being outside of it. We felt it was necessary to break the mold and find something universally interesting or humorous about the experience though. We’re like a Mommy Blog for Dads or a “College Humor”/”The Onion” for non-parents.

I’m no great writer, in fact, I had teachers who told me as much in school. But I loved story and I loved the creation of an artistic effect, which is why I more than likely ended up acting in the first place. As far as acting goes, I’m producing and acting in another short film, 8.31 ) following the lives of a pregnant couple on the last day of sun on Earth. The teaser we put together looks pretty amazing and I’m loving the script we’ve written.

But to be more succinct:

3.    Continuing my acting/writing career by hook or by crook, and producing another short film.

4.    Raising my son with a wife who fills me with creativity and anappreciation for being alive.

I wake up between 5:00am and 6:00am to run 12 miles, save two kittens on the way, work on restoring an 18th century painting and then eat a macrobiotic breakfast. Is any of that true? Only time and my blog will tell, I guess.

Tablet reading excites me. I used to say that I’d never read anything without paper and ink. I was a snob about it. I got an iPad at the end of last year and have read more books this year than the past two years combined with it. I love to read again.

Hands-on fathers excite me. Maybe excite is a bad choice of words. Hmmm… I’m stoked to see father’s who participate and involve themselves in as many activities as they can with their kids. Spectator fathers are a clichéd and useless endeavor.

Film and Television on the web excites me. It’s like the Wild West all over again. There will be lots of chaos and inequity at the start, but I’m hoping the deployment strategies for film and television media will evolve into something easily reachable and profitable for the artist.

Most of my creativity happens when I’m not thinking. Too much thinking can suffocate creativity, at least by my own experimentation. When I find myself trying to ‘think real hard’ about a concept, I’ve immediately fallen into a lower echelon of work and effort that isn’t necessarily requisite to powerful creation.

Essentially, I just do a lot of writing without looking at the computerdhbj screenndchvkhb and never learn my lines.

Mens’ lactation vests. Women look so serene and tranquil breastfeeding their babies. Men sit there with a hangdog look and yearn for that kind of connection. I think all of you venture capitalists out there should take note: male breastfeeding – THE WAVE OF THE FUTURE.

I’ve been reading… here it comes… science fiction every day for the past 3 months. I wasn’t a huge Sci-Fi nerd growing up, although I did wear glasses, have braces and wear sweatpants, but, I tell you, there’s something about envisioning the future right now that really stokes my creative juices these days. I try to live there, on that future track, and work backwards when I write scripts or dream up satire. Being able to reside in a lucid dream, albeit one that can be slightly bleak, helps me understand how to formulate my thoughts and objections to the things I see now.

The other thing Science Fiction does is scare the crap out of me. When I think about the possible burdens my son could endure, it editorializes my thought process on living. It quickens my resolve to create. It lights a fire that burns my bum and sends me off to the races.

I feel like Nick Hornby. I’m no king-maker – just a list-maker.

Alright, I’ll settle on one of my top two favorite authors. Seeing as though one has been dead longer, I should probably burn his effigy first.

Mark Twain’s new autobiography is quite simply “the shit”. The man was crass but, boy, did he know how to call the play-by-play and extrapolate it. This is the first time his autobiography was organized and laid out as he’d wished, sifted through the myriad start and stops he’d waged against the project himself.

No finer teacher than the past and taught by a riverboat captain.

Now that I’m a fledgling and crock of a blogger: WordPress and its accompanying apps. That program is so bulletproof. I don’t think it gets enough time in the sun for being an all-out juggernaut of a platform. Amazing.

Now, if it could only teach me how to love.

Tina Fey, Mark Zuckerberg and Julian Assange. But they’d have to be on-air interviews by muppets in a “crossfire” setting. I think that’s the only way I could take them seriously.

What are some goals you have for HowToBeADad.com?

I would like HTBAD to become a community for parents and non-parents alike, where the two groups could co-exist but still tease each other rigorously. I’d love for it to be a profitable venture, so I could actually spend my time working on the fantasy posts I have in my head and basically live my dream: writing and filming things, thereby getting paid.

Which family member does your son remind you of most?

Finn reminds me most of my grandfather, Walter. Walter was a stout Irishman who was beloved by many and disliked by few. Over 700 people showed up to his wake following his passing away. Finn’s built like the old man and laughs as often. I think my grandpa also licensed his hug techniques to my son as well… I wonder what the royalties are on those suckers…