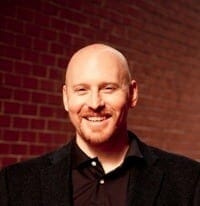 Daniel R. Odio is CEO and co-founder of PointAbout, Inc., an innovative development and platform company in the mobile space.

PointAbout specializes in creating a Mobile Services Layer and robust enterprise mobile app creation for the world’s largest brands including Disney, Newsweek, The Washington Post, Gannett, GM, OnStar, Cars.com and Politico on leading platforms including iOS, Android and Windows Phone. PointAbout was named a worldwide top 3 mobile app development company by FastCompany magazine and won a Webby in 2009 for its Obama Inauguration app. PointAbout was ranked #11 in the Technology 500, with 1,072% revenue growth in 2010 (see related VentureBeat story) and a Top 100 private company by AlwaysOn.

PointAbout also created AppMakr, the largest Do It Yourself mobile app creation platform for iPhone, Android and Windows Phone apps. AppMakr is used by brands like PBS, Newsweek, PGA TOUR, Harvard Business Review, US Congress, MacLife, Accenture and thousands of others. Over 1.5% of all apps in the iTunes App Store were created using AppMakr.

Prior to real estate, Daniel was the VP, Sales of AcceleratedServers, a Beowulf supercomputing cluster company whose customers included the Department of Defense and Paramount Pictures.

Daniel has been featured on CNN, CNBC, TLC, Forbes, BBC and many other publications for his innovative use of technology in industries ranging from real estate to computer servers and mobile phones.

Daniel was a member of General Electric’s Technical Leadership Program. Daniel worked for GE in Latin America, including Brazil and Argentina. Daniel graduated from the University of Virginia with a BS in Commerce, speaks Spanish and Portuguese, and resides in San Francisco, CA with his wife.

Enabling brands of any size to connect with their users through mobile applications.

We innovate and execute flawlessly, every day. We encourage our team to try new things and push the envelope and understanding of what we think we know to be true. We believe that a great idea becomes an action item only when it has both an owner and a due date, and we enforce that with each other.

People who see the world differently than I do. People who aren’t afraid to try new things and take risks, even when the world thinks they’re wrong. The Wright Brothers inspire me. Two bicycle shop owners without big funders behind them who were successful through relentless passion and innovation and changed the world because of it.

I wish I’d come out to California much sooner. Being an entrepreneur on the East Coast is much harder than it is out here.  I’ve learned not to settle for ‘ok’ but to pursue greatness, both from myself and those around me.

We’re at a tipping point where content can be captured in ways that were never possible before. Culturally, however, it’s still strange to do so. There’s a big business opportunity for the entrepreneur who can figure out how to capture the expertise inside people’s heads and share it with the world.

We use Basecamp religiously to build knowledge in our company via threaded conversations. We use iShowU to capture content. We use TextExpander to play computers like instruments, and keyboard shortcuts to work efficiently.  Blogs have largely taken the place of books to me, including Hacker News which is tech content curated by Geeks. I also highly recommend Paul Graham’s essays.

Why is mobile such a big deal?

We believe it’s much bigger than people realize. Throughout humanity’s existence, we’ve been a reactionary species. As analog beings, we can only react to the experiences we have individually. But the mobile phone we carry in our pocket changes that. This intimate digital device is connected to all of humanity’s knowledge, and allows us to, for the first time, live proactively by matching, filtering and sorting mountains of data into actionable advice that appears whenever we need it. The most revolutionary part of the sea-change enabled by these mobile supercomputers is how indistinguishable the experience is from magic. Having answers show up to questions you didn’t even know to ask will change the way we interact with the world and those around us.

It’s amazingly hard and unbalanced — you have to be really passionate about it. I’ve written a blog dedicated to technology entrepreneurs at www.DanielOdio.com , including advice on how to raise money based on the $1MM we raised, at .