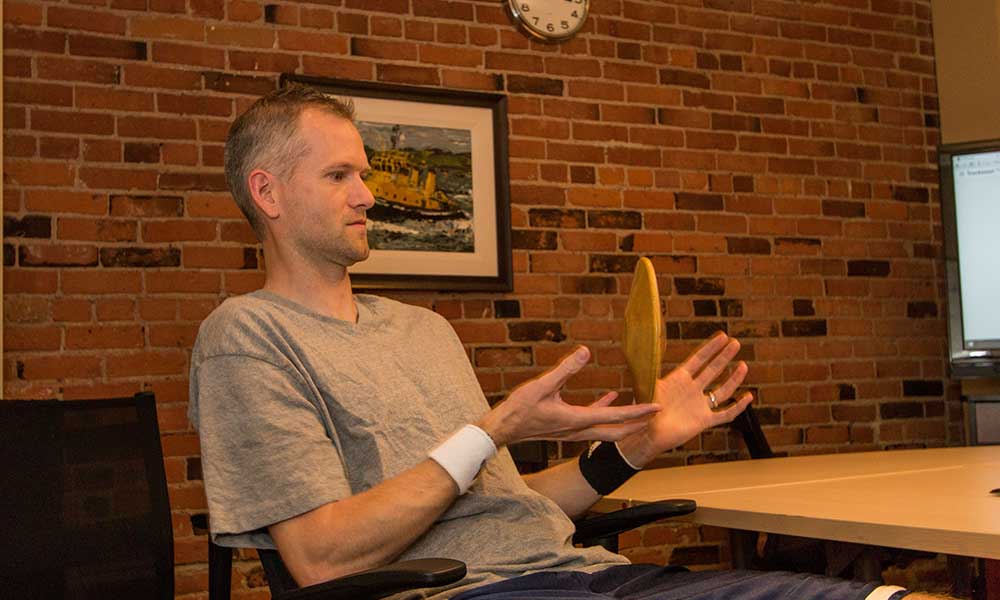 Looking back on all the things I’ve ever started, every one had a common thread – I failed a lot at the beginning, which is completely OK.

Darin Herle has a knack for building stuff.

At age 5 he built his own rocket. At 10 he took apart the family lawn mower and reassembled it. At 19 he built a device to hack into his school’s voicemail system.

This later turned into a passion for creating and selling new technology. Today, Darin is a Co-Founder at Trackmeet, a SaaS meeting productivity tool in use by teams worldwide.

Where did the idea for Trackmeet come from?

I was the VP of Sales at a software company that had grown from 20 – 100 people in a short period of time. The founders were experiencing growing pains as they struggled to integrate new people and processes. One of the areas that really suffered was meetings – no accountability, little insight and no consistent approach across the company. We looked around the marketplace and couldn’t find anything we wanted to adopt. So, we decided to build it. Trackmeet was born!

We’ve got a team of 4, so everyone wears a lot of hats. On a typical day I’m probably talking to customers, writing content for our blog, reviewing analytics data around our marketing efforts as well as product usage, talking to the development team about work in progress and future work, updating our website and help system, talking to the press and reporters or sending an update to our investors. Phew!

I can think of a couple of ways that I bring ideas to life.

First, if I feel strongly about a direction I think we need to go in, I’ll plant “seeds” to this effect with stakeholders over time. For example, if I feel strongly about something I think Trackmeet should do from a product perspective, I’ll talk about the idea, get some feedback, provide some market intelligence about it, provide examples, build a mockup, etc. all with the intention of influencing and nurturing the idea to fruition, while validating and improving the idea as it emerges.

Second, I think the best way to lead is by example. If an idea can’t be grown using the aforementioned technique, I’ll often implement it myself. As a generalist, I’ve been able to initiate many of our development and marketing efforts simply by diving in. In addition, it’s often quicker for me to simply build what I want vs. waiting. I’ve learned to trust my instincts around product, UX, people, sales and marketing.

For the all the hype that exists around it, IoT really excites me given some of the interesting problems and use cases that can be unlocked with low cost/power computing coupled with inexpensive sensor technology, GPS/indoor wayfinding and smartphones.

We’re actually working on an IoT device for Trackmeet, which has allowed me to satisfy the creative/hardware side of my brain playing with a Raspberry Pi, Linux, Bluetooth LE and embedded software running on Node.js.

As a creative, I’m cognizant of and try to achieve “Flow” on a daily basis as well as being aware of the elements that make work worthwhile – mastery, purpose and autonomy, things that our team tries to explicitly incorporate into our day-to-day work.

Learn more about “Flow” in Mihaly Csikszentmihalyi’s book on the topic as well as the “Mastery, Purpose, Autonomy” triumvirate in “Drive” by Daniel Pink.

The worst job I ever had was at a gas station. I was 19 and I routinely did the night shift. It was INCREDIBLY boring. Kudos to the people who can do these kinds of jobs – there just wasn’t enough to the position to keep me engaged. I learned that I really had to like what I was doing to justify putting so much time into something.

Looking back on all the things I’ve ever started, every one had a common thread – I failed a lot at the beginning, which is completely OK. Trying anything new involves a lot of learning. One of the mistakes we made at Trackmeet was to wait too long to go to market – in retrospect, we should have built a simpler product and pushed it out to users faster.

From a macro level, I try pretty hard to maintain a certain amount of balance in my life, which translates into things that I do repetitively. I ride my bicycle to work everyday, I do yoga a couple of times a week, I have coffee and lunch with friends, I spend time with my wife and kids. The idea here being that a life of entrepreneurial pursuits alone is a pretty lonely life.

Our business model is a completely self-serve SaaS tool that’s used by team’s worldwide, so for us, marketing is one of 2 pillars that ultimately dictates success for us (the other being the product!). So, you’ll hear this a ton when talking about digital marketing, but content is king. There are so many alternatives to our offering, we need to cut through all the marketing noise to reach people who may be interested in taking Trackmeet for a spin. We’ve invested heavily in honing our messaging which seems to be paying off.

I’d say one thing I’ve failed at is ignoring my gut instinct in a few different situations. Due to a plethora of other factors, I chose to be persuaded otherwise. In retrospect, in so many of these cases, my initial sense is usually correct.

My wife is a pilot but hasn’t flown in years – I suspect the births of our kids has something to do with this. 🙂 For her birthday, I arranged for her to go up with an instructor and our kids and get behind the yoke again. She loved it! They flew around the Gulf Islands, over the ocean and came up the Saanich Inlet before doing a number of touch-and-goes to practice her landing skills. What a great day.

I answered this exact question over on Quora just a few weeks ago:

IMO, most business books are chock full of anecdotes and make for great war stories but provide precious little in the form of directly applicable tactics.

Another group of books can be summarized on a single 8 x 11” sheet of paper (and probably should have been).

And then there are the few that provide outsized value relative to their price. This list is probably different for each of us, but some of my faves? “Difficult Conversations” by the Harvard Negotiation Project. “High Output Management” by Andy Grove is another.