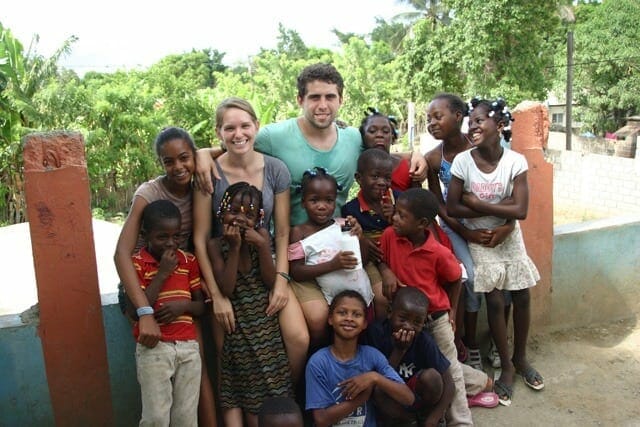 [quote style=”boxed”]You work for them and take risks for them. A lot of people have ideas that they love to think and talk about, but they never do anything about them.[/quote]

David Palmer is the co-founder of UnderFit, an online undershirt company. You can visit them at underfitshirts.com. He also founded the Joan Rose Foundation, which is devoted to providing opportunity to street children in the Dominican Republic. He is from the Detroit area and graduated from the University of Colorado at Boulder in 2008. He lives in the Dominican Republic with his girlfriend, who he will tell you is the real boss of the foundation. He speaks English, Spanish, and Portuguese and is becoming proficient in Haitian Creole. He has been featured on several prominent Latin news shows, including Primer Impacto on Omnivision, which is aired all through Latin America and the United states(not in English). He has also been featured in the Detroit news, due to his work in the DR.

He runs UnderFit with its co-founder, Ben Brockland. UnderFit is devoted to providing a high quality undershirt at a reasonable price. Their shirts are made in the US, and a meal is donated to a child at the Joan Rose Foundation for every shirt sold. David tries not to sweat the small stuff and keep what is important in perspective. He is an adamant believer that those who lack a few admirable vices are every bit as intolerable as those who lack any real virtues.

Where did the idea for UnderFit come from?

A friend and I were talking about all of the problems with traditional undershirts; They wouldn’t stay tucked in, they make you look like you have a gut due to the excess fabric and they were made out of mediocre fabrics. We decided we could fix them, and I am proud to say that through UnderFit we have fixed them.

I live in a rural area in the Dominican Republic, so it is a bit a different. I usually wake up around 6:30 and start working on UnderFit. This includes a lot of phone calls back home to the US, where my business partner, Ben Brockland, is based (Chicago, IL). We usually go over sales metrics, manufacturing planning, and shipping logistics.

The work on UnderFit is definitely the most peaceful part of my day. At 10:30 I completely shift gears and go to the Joan Rose Foundation, a development center for impoverished street children. We have 95 kids who attend daily. We give them lunch, education, medicine and clothing. While at the foundation my girlfriend and I have to teach class, supervise the teachers, make sure the children and teachers have the proper supplies, break up a lot of fights, and deal with any medical issues. Needless to say trying to control 95 unruly street children wears you out. The children leave at 4 and I go home to put a few more hours into UnderFit. I believe that few things in life could have given me the appreciation for quiet administrative work that working at the foundation has.

You work for them and take risks for them. A lot of people have ideas that they love to think and talk about, but they never do anything about them. I don’t care how brilliant your idea is; if you are not willing to work and sacrifice for it, then it’s just a meaningless daydream (not that I have anything against meaningless daydreams. Lord knows I spent my share of time saving my school from nefarious terrorist plots or going Super Saiyan)

Automated business is now accessible to startups. It used to be an enterprise play, but now guys like me can take advantage of it. An example: We use Shipwire to warehouse and ship to all of our customers. This allows me to run an ecommerce business while working on another passion of mine in the Dominican Republic. This is where small business is going and will do incredible things for the mobility of my generation.

I was a bus boy for a while in college. At first it was super busy and I loved it. Then summer and welcome week ended and it was dead. I just sat around the whole shift and made very little money. I learned that if you’re a hard worker you can get away with a lot more bad behavior without being fired.

I would research emerging fabrics more. We now use ProModal which wasn’t even on our radar initially, but is hands down the best we’ve ever come across. Getting to this decision earlier in the business would have really moved us along faster.

Adapt. I can’t even tell you how many times I have realized that what I was doing or thinking was wrong. As you go about starting your business you are going to learn an incredible amount about the industry you are in, your product, your customer’s behavior and a lot of other stuff. If you’re not willing to roll with the punches and change your approach as your knowledge base and understanding change, you will probably fail.

We originally had all of our inventory sent to my partner Ben’s apartment. When an order came in he would package it up, take it to the post office, wait in line and send it on its way. This was a gigantic thorn in his life for about a year. Then we learned that not only would shipwire accept and send our goods, but it would not cost us a penny more to use them than to take it to the post office ourselves. This is due to the fact that their fee is negated by their better shipping rates. We were not quite the model of efficiency that we strive to be when it came to that whole process.

Making a couple centers in the inner city where people can buy and sell stocks cheaply. You would then advertise them like gambling spots and let people spend a couple bucks buying and trading penny stocks or whatever they wanted. It would just be gambling, but with better odds than the lottery or casino. It would be great because impoverished people would get a much better return on their money than they do going to the casino or playing the lottery and would learn about finance at the same time. Regulations would probably make this impossible, but it would be cool.

I often root for the bad guys in movies. Not if he is a rapist or something horrible like that, but provided he isn’t just pure evil, he usually has my backing.

The Tao of Pooh. Some of it is nonsense, but there is a lot of real wisdom in that book.

A kid at the foundation was really sad yesterday, so I took him aside and asked him what was wrong. This kid, like most of the kids at the foundation, has had a hard life. He goes hungry on the weekends because the foundation is closed, rarely eats dinner, lives in a 3 room shack with 12 other people, is an illegal immigrant in a third world and has to deal with a plethora of other terrible realities. Despite being starving, discriminated against and impoverished, his biggest issue, what had made him visibly upset, was a lack of parts for his bike frame. When he told me that was what was wrong it really made me laugh.

My brother Mark. I can’t write much about him, but he is doing what he feels is right and does not let fear, pain, hard work or what other people tell him stand in his way. Other heroes of mine include Teddy Roosevelt and Ghengis Khan. I respect people who refuse to accept things as they are and fight tooth and nail their entire lives to try and shape the world as they see fit.

What is your favorite part of running your own business?

If you could live in any time period in history which would you choose?

I would definitely want to be in my twenties during the revolutionary war. The mix of having something great to fight for and being able to help create a nation, the likes of which had never been seen before, really seems special to me.