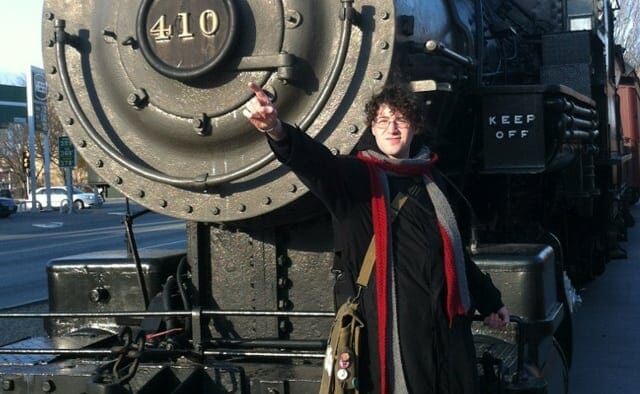 [quote style=”boxed”]If I could change one thing in the world, it would be a simple thing. It would be to give everyone one hour of dedicated reading time a day they can read whatever they want—but reading is the only thing you can do during that time.[/quote]

Skippy (a.k.a. Erik Sund) is a traveling writer collecting and sharing peoples’ stories across America. He set out on a cross-country train journey for three months in the summer of 2012. He kept a blog at so people could follow along and vicariously travel America with him.

Obtaining a Master’s Degree in Philosophy from the University of Toledo, Ohio, Sund wrote a Master’s Thesis discussing monsters (undead and otherwise): how we talk about them and how their stories are intertwined with the way in which we navigate the world around us. He is living in Lowell, Massachusetts, writing and is working on starting a used bookstore in Lowell.

Where did the idea for your cross-country trip come from?

The idea for my cross-country trip came from a few places.

First, I think that trains are a spectacular way to travel. The people you meet and the places you can see are amazing. I also think that the rail system is underutilized in America. I hoped to show that it is possible to travel around America effectively without a car or taking a plane.

The second idea for the trip came in the form of all of the citizen journalism I have been seeing spring up over the past few years. When people see something, they take to the web and share the information that they deem important. The way I see it, there are so many interesting things happening, and there are not enough people to capture and tell those stories. I took it upon myself to become a writer to help other people tell their stories and, in the process, tell a story of my own.

There are a few types of typical days on the road, depending on where I was in the scheme of the trip. Was I on a train for 48 hours? Did I just arrive in a city? If I just got off the train in a city, I make my way to my host’s place of residence, hopping buses and walking. After that it was time to research the city: find events, restaurants, bus routes, parks and libraries. During my two- to four- day stay, I would interview my hosts and get a feel for the city and then pack up and start the whole process over again in a new place.

A trend that excites me is the fight against DRM (Digital Rights Management) and the cross-platform sharing of information such as open source.

The worst job I have ever had was a fry cook for a fast food restaurant. While there, I learned that determination and hard work are not always rewarded.

If I were starting this project over again, I would be more clear at the outset with the goals and expectations of the project. I would explain that the project is about book research and that I need many people to help share their stories to make the book more awesome.

One thing that I do is to be open, honest and responsive to feedback. I think that it is a great way to engage anything. You share what you are doing, ask for feedback, tell people how you feel about what they are doing, offer suggestions and do not be afraid to let your mind be changed.

One problem that I encountered while I was promoting the trip was a denial of participation unless I paid a membership fee. There were some local organizations that offer networking opportunities and events, and I was hoping that I could get them to either sponsor me or allow me to barter goods (the books that I write) for a signal boost during one of their events. Ultimately, my suggestions went ignored, and I continued to focus on other advertising avenues.

A business idea that I can give away is philosophy-related music. I would love to see some one work out “Being and Rhyme: A Series of Ontological Raps and Ciphers”  (based on Being and Time and Being and Nothingness).

If I could change one thing in the world, it would be a simple thing. It would be to give everyone one hour of dedicated reading time a day they can read whatever they want—but reading is the only thing you can do during that time.

Here is a secret: the world is only as scary as you perceive it to be.

Three of my favorite online tools are:

1.  Email – The power is so great. For such a simple tool to instantly communicate ideas and archive your thoughts is such a wonderful thing. Email is such an adaptive technology, and people use it in a variety of ways to empower their lives.

3.  Steam by Valve – I love the way in which it builds a gamer community and makes backing up your game library easy.

3.  LibraryThing – I like them because they allow their users to catalog their book libraries and participate in a number of book-related activities. There are member giveaways regularly where people just give you books. I especially like the Early Reviewer program that lets you pick books to review before they come out. If you are lucky, you can win an advance reader’s copy.

I would recommend On the Road by Jack Kerouac. First, it was partly an inspiration for my trip. Second, it tackles the American dream head-on. The struggle to stay or go and what to do with your life and who you become is a fiction, but it is a fiction that we are all constantly creating.

1.  @PennyRed – For her interesting reporting of political events.

2.  @warrenellis – For his smart ramblings, his flu-induced hallucinations, his devotion to #drwhiskey and his dedication to the craft of writing and supporting his audience.

3.  @jephjacques – Writer of one of my favorite web comics, Questionable Content, he tweets about the state of his health (mental and physical), live streams of him drawing the comic, releases of his new albums for Deathmøle and about his dogs. He is a funny person to watch, and it is nice to see him interact with his fans in such a positive way.

The last time I laughed out loud was last week when my apartment-mates and I were playing a a word game. I don’t know if it has a title, but the rules are that you try to bring up a topic in a sentence that ends with a rhyme with the word “prayer.” And if you could do that, then one of us would have to sing “Livin’ on a Prayer.” Sometimes the lead-up was groan-inducing; other times is was “roll on the floor” funny.

One of my heroes is Neil Gaiman.