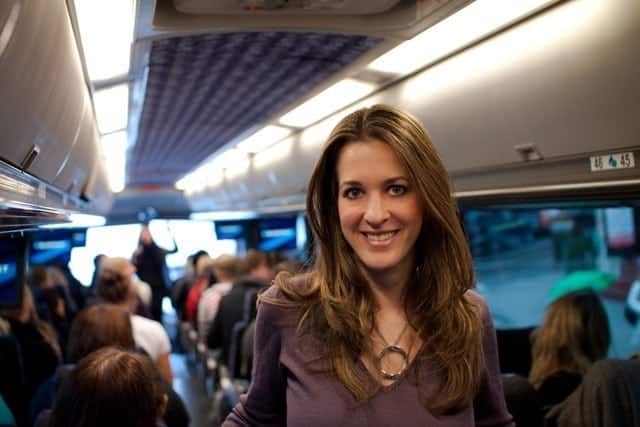 [quote style=”boxed”]I babysat for a family of bird breeders, and they bred 650 birds in their home; I learned to always ask specifics about a job and a job’s environment in advance of agreeing to work there![/quote]

If you film it, they will come. Armed with just a van and a driver, Georgette Blau introduced the concept of TV and Movie tourism to New York City in 1999 at the age of 24. When she realized that her first apartment in New York City was a stone’s throw from where The Jeffersons lived, Blau got the idea to scout other New York City locations that had been used in filming TV shows. Using her passion for classic television and cinema as inspiration, Blau soon turned a weekend job and a small company into the world’s largest TV and Movie Tour Company.

Renowned in the tourism industry, Blau has been a featured speaker at the Motion Picture Association of America’s Business of Show Business Symposium in Washington DC; the International Tourism Bourse, Germany’s largest trade show; the Film National Commission in France; the Italian Film Commission in Rome; and at the Paramount Pictures office in Tokyo. She has also been featured in thousands of media outlets both domestically and internationally, including: The New York Times, Donny Deutsch: The Big Idea, People Magazine, USA Today, Fox and Friends, E! News, Access Hollywood, Good Morning America, Business Week, and many others.

Additionally, Blau is the founder of the Association of Tours for Television and Movies (ATTAM), an umbrella organization that represents companies around the world that provide television and movie tours. This alliance is intended to provide networking opportunities for member companies including cross-promotional and marketing ventures.

Blau currently serves on the board of Young Variety of Variety the Children’s Charity of New York and the Norwalk, CT Preservation Trust Board. On Location Tours has also donated numerous charity tours as fundraising events for schools, hospitals, and other institutions.

Georgette Blau was born and raised in Norwalk, Connecticut. Blau graduated from Skidmore College in 1996 with two Bachelor of Arts degrees in Creative Writing and Architectural Preservation. If she isn’t watching reruns of her favorite shows, Blau is writing and performing her own stand-up comedy material in New York City. She resides on the Upper East Side with her husband Yoav and son Benjamin.

We are in the early stages of working on developing several new tours tied to some popular TV shows.

Where did the idea for On Location Tours come from?

When I realized that my first apartment in New York City was a stone’s throw from where George & Louise Jefferson lived on The Jeffersons, I realized there must be other locations like this scattered throughout the city. At that moment, I came up with an idea to see what else was out there. I began scouting other locations that have been used in filming other TV shows and movies and hit the jackpot. That’s how I created the concept of TV & movie tours and opened On Location Tours.

My typical day depends on the season (it tends to be busier in the tourist seasons of December and the summer) and the projects that we’re working on. I help with overseeing the operations (dealing with higher customer issues, inventory, etc.) as well as the marketing/sales side of things. A typical day includes emails, marketing and sales approvals on artwork and other projects, reviewing work we’ve done online, both in SEO and with social media, phone calls with other tour companies and attractions in New York and Boston (as well as the fun phone calls to our accountant and attorney), and seeking out ways in which we can develop the company and push it forward. We simultaneously work on a number of different projects, which makes the job fun.

We bring ideas to life in a number of different ways, and are constantly working on different campaigns and ideas, but I will give the example of developing a new tour. For new tours, we look at the popularity of the particular TV show or movie, as well as the number of locations that it uses in a particular locale/city. If we decide to launch a new tour, we then research the new locations, develop the script, hire the tour guides, and create a marketing campaign. We also have ongoing marketing campaigns following the initial launch, but these would normally encompass all of the tours that we run.

The portable devices out in the marketplace, especially iPhones and iPads—since they are portable computers, they are very handy without being cumbersome. They make it very easy for me to do business wherever I am.

I babysat for a family of bird breeders, and they bred 650 birds in their home; I learned to always ask specifics about a job and a job’s environment in advance of agreeing to work there!

I would hire a staff person from the start, even someone at an administrative level who could have helped to field phone calls and enter tour reservations. I did not have enough time during my first few years to spend on business development.

As per the question above, I would recommend to hire someone as soon as possible, even if it’s an intern, to help with the day to day operations of running a business so you can focus on the bigger picture.

Early on, I was managing the tour guides, and did not have a manager to oversee them. A number of them started running their own show, doing tours on their own routes and not on the routes we had written and provided them. I resolved this by hiring them on as employees instead of subcontractors; by having a lawyer draft an employee manual; by conducting annual reviews; by hiring an operations/tour guide manager; and by having secret shoppers report back their findings after taking tours.

One business idea, which I was initially against, but now use as a useful tool, is reviews. We use customer reviews on our tour guides as incentives for our tour guides as well as a way to improve their performance. Reviews are also great for increasing business, since tourists tend to see them as they are perusing the internet, and for helping us to improve the quality of tours overall.

I would like to decrease teen pregnancy rates; the first step in that direction would be to extend high school hours, since the majority of teenage pregnancies occur in the afternoon, when parents are at work.

I am in love with the actor Liev Schreiber.

SEOmoz.org has tools and information essential to helping properly optimize a company’s website rankings on the search engines.

Twitter – It’s the best way to connect with a multitude of people, from customers to clients and everything in between.

Cision – Great resource for finding journalists and bloggers whose interests fit those of our company.

I really enjoyed reading The Corner Office, a book about CEOs and how they got started. The book is written by Adam Bryant who also authors the New York Times “Corner Office” column.

@nycgov – the official source for everything NYC

During some recent inclement weather, our Director of Sales was checking in at a tour departure point to notify passengers that the tour was unfortunately cancelled, and because of all of the traffic in New York that day, he had to step out of his cab and run down Fifth Avenue with his dog, who he had just brought from the vet. The image of him running down Fifth Avenue with his dog under his arm gave me a good laugh.

My father was my hero; he unfortunately passed away, but he was my mentor. He was an entrepreneur and very successful at a very young age. He was a shoe designer and manufacturer and a great storyteller.

I would say that I am best motivated by the love of my job and wanting to succeed. I love helping to develop new tours (I love pop culture, so developing new tours and marketing them is almost like a hobby to me). I also am motivated to keep the company thriving and always pushing forward.

You have a one-year-old son. Do you want to have more kids?

I would like to have more children, but for now I’m enjoying my time with my son!