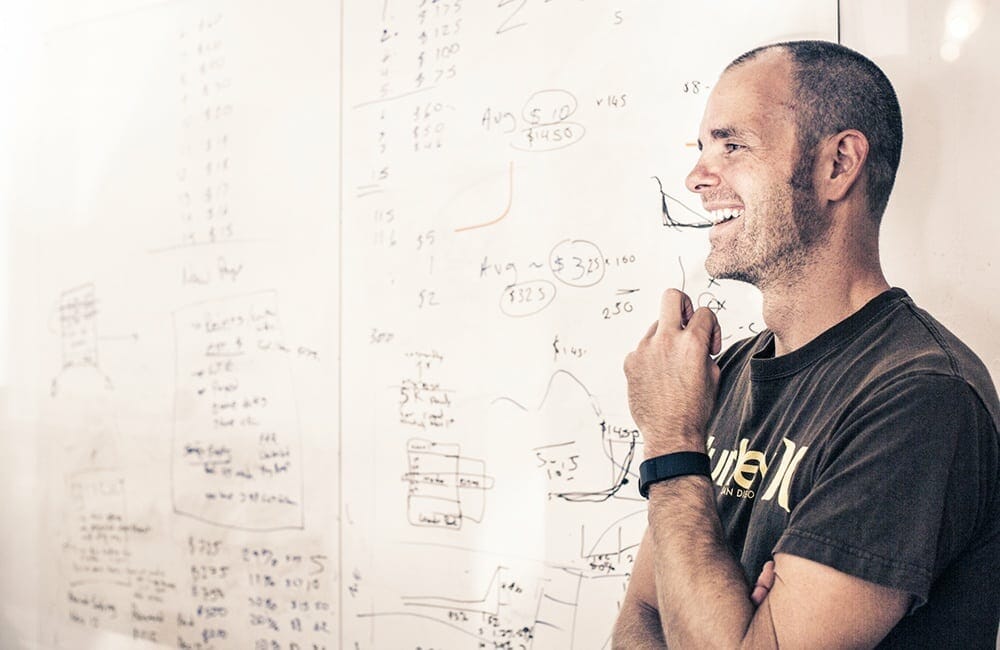 I often find the hardest part of being productive is re-starting. I try to quit right in the middle of something exciting so that I’m energized to pick it right back up the next day.

GK Parish-Philp is a co-founder of Shopswell, an online community of savvy shoppers who enjoy discovering, sharing and creating engaging content around products they love. GK has an extensive background in full-stack web, iOS, and Android mobile application development and has more than ten years of lead product management experience under his belt.

A testament to his expertise, three of the communities GK helped build – DivX, mp3.com and Stage6 – each exceeded 10M unique visitors during their prime. GK earned his Bachelor of Arts degree from Texas A&M University.

Where did the idea for Shopswell come from?

Shopswell was born out of frustrations with the way a lot of the internet is evolving. Increasingly, the largest companies leverage dominant market position to herd consumers in a direction that makes the company more money at the expense of a great experience, rather than thinking about how best to help the consumer. We see this happening particularly when it comes to shopping online.

For example, we’re constantly inundated with inauthentic reviews, rigged search results, or untrustworthy affiliate sites, all while being bombarded by advertising. That is just not our idea of a good shopping experience. Amazon wants to promote the products they’re selling. Google promotes the retailers who pay them the most money. Nextag and the other price comparison engines are the same, they’re selling your eyeballs to the highest bidder. But where does that leave the consumer who doesn’t already know exactly what product they need to buy?

We couldn’t think of a single company that was exclusively focused on helping people find the best product for their needs, from the best place to buy it from. Our team is comprised of community builders, and we’re social by nature, so we immediately thought about what could happen, if we built a modern shopping platform. The platform would enable consumers to share authentic information, experiences, and passion for products, life and shopping. Thus, Shopswell was created.

One of the best things about being part of a startup is that there really is no such thing as a typical day. Every day brings new challenges and new roles to play: customer support, advertising, marketing, data analytics, fundraising, coding, product design, strategy, hiring, writing.

I feel most productive when I’m able to write code and do hands-on product development. You can work for an entire day on a marketing campaign, and it just may not work at all. But if you spend a day coding, you at least know you’ll have a new feature or test-suite, or fixed bug to show for it.

I often find the hardest part of being productive is re-starting. I try to quit right in the middle of something exciting so that I’m energized to pick it right back up the next day.

Tools like Ruby on Rails let us rapidly prototype and ‘feel’ solutions very quickly. When I started in software, implementing solutions required a significant investment of time and resources. So you had to carefully storyboard, wire frame, and spec everything out in advance. Even with all that upfront investment, things inevitably changed when push came to shove in the live product. Now, the tables have turned. Frameworks like Ruby on Rails and Bootstrap make it almost faster and more efficient to live prototype solutions than to mess around in Photoshop or mockup tools.

At Shopswell, we try to take a similar approach to marketing. It’s more efficient to quickly bang out and test campaigns quickly in Facebook or Google than to spend a long time trying to get everything just right only to find you need to tweak it anyway.

For my entire career, the trend that has excited me most has been the old buzzword disintermediation. The slow but steady movement of power from institutions to individuals has been and continues to be world-changing. The ways this manifests are unpredictable but inspiring. Everything that is part of this trend from Ruby & Python to Heroku, to Facebook, to Google, to Amazon FBA , to Kickstarter, to YouTube, to Arduino, and on and on all get me excited.

I try to workout everyday at noon. An intense mid-day workout, just as my morning coffee is wearing off, gives me a nice afternoon productivity boost. Plus, no matter how difficult a day is otherwise, completing a really good hard workout lets you know you’ve accomplished something worthwhile that day.

While I was in college, I spent a summer working in a diaper factory. I worked 12-hour swing shifts working four days from 7am to 7pm, then a few days off than four days from 7pm to 7am. We had 10-minute breaks every two hours and 20 minutes for lunch. During that summer, I learned that Marx was actually right about some things.

I wish I’d tried more things more quickly and aggressively. It has become trendy for entrepreneurs to say things like ‘fail fast’. I think that’s a terrible way to approach entrepreneurship. Creating a business is in many ways like creating art. You don’t create great art by failing fast. You train to establish virtuosity. The best way to do that is to try many things quickly and put in the reps.

We’ve been able to identify marketing channels that are relatively immature and unknown and are therefore cheaper and more effective than more well-known channels. If I elaborated beyond that, they wouldn’t be as unknown anymore 🙂

When I first set out on my own, my partner and I bootstrapped a business. We had so much to learn, the deck was really stacked against us. We both had to learn how to develop, deploy, and maintain products, how to code, how to do marketing, sales, and support, along with all the other miscellaneous tasks that startups require. All without a budget. Fairly early on, we found a model that worked and we started making money. Honestly, we should have continued learning and trying new things but we got addicted to the idea of generating revenue. In the end, we weren’t able to grow the initial revenue stream to sustainable levels. We overcame it by learning as much as we could from the experience and moving on to the next.

Business ideas are a dime a dozen. Nothing really matters but your team’s expression, implementation, and execution of the ideas. In some ways, asking what’s a great business idea is like asking what novel one should write. Well, what are you inspired to write? What can you write? What will people read?

I try to acquire or learn at least 4 new skills or abilities a year. I recently read Richard Feynman’s autobiography and found an interesting similarity between him and Einstein: music.

Einstein played the violin to ‘think’ and Feynman played drums.

So I bought a little electronic drum pad to learn how to drum. I love it. In a few weeks, I’ve gotten competent enough to play along with most music. Thirty minutes of drumming is like its own meditation and really refreshes the mind for working on hard problems.

I love history. There is so much to learn from people who’ve faced similar challenges. There are hundreds of great lessons directly from entrepreneurs of the past (I especially recommend Henry Ford’s autobiography: My Life and Work). But it always strikes me that there are so many parallels between the founding of the US and a starting a new business:

• The US was truly innovative. No nation quite like it had ever existed
• The ‘business plan’ for the US was a combination Mission Statement (Declaration of Independence) and loose Operating Plan (Constitution).
• The US Initially ’failed’ (articles of confederation) and had to ‘pivot’ (the constitutional convention). The founders weren’t afraid to try new things.

I’d recommend reading The Declaration of Independence and the Constitution through the lens of imagining the US as a new business as much as a new nation. Imagine the challenges of aligning various people towards a common goal, and creating a viable ‘corporate culture’. The founders made plenty of mistakes, but their successes are notable and inspiring.

Lots of folks inspire me daily. I’m going to go a bit off the beaten path, though and say Greg Glassman the founder of CrossFit. CrossFit itself is an inspiring example of a product that is as much a culture/brand as it is a service that delivers enormous value to its members and simultaneously provides immense opportunity to its partners. We have been partly inspired by Glassman in creating our Shopswell Rewards Program which seeks to directly reward our community for creating and growing value. Probably the best introduction to his thinking and approach is by way of several great talks of his on YouTube channel.