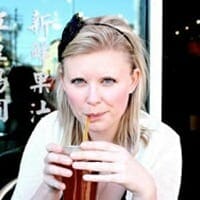 [quote style=”boxed”]I’ve learned the key to happiness at work is to doing what I love. Those are often the things I’ve found I’m better at anyway.[/quote]

Hasalyn Harris is a writer / filmmaker / ideas person who has been moonlighting as the anchor and producer of Montana Today – a top rated morning news program on NBC Montana for the last seven years. In 2008, she decided to get an MFA in Media Arts / Digital Filmmaking. Since then, she’s co-directed, co-written, and produced six short films one of which was featured in a national touring women’s film festival “Lunafest.” She’s also the Producer of Marketing and Distribution for the upcoming feature film adaptation of Winter in the Blood ). In this role, she manages the online promotion, identity, and voice of the film project – big shoes to fill for anyone who has ever read James Welch’s classic novel.

In 2009, Hasalyn co-founded Aloneinaforest ) – an LLP focusing on online identity and branding for artists, filmmakers, and creative people. It started out as a side project, to help finance her own films – and grew into a passion for helping artists organize their online selves.

“It’s one thing to be somebody in person – but if that person or project doesn’t live online, if the online self isn’t nurtured, there’s a chance no one will ever hear about it,” she says.

Last year, seeing a need to highlight the talents of filmmakers in the community, Aloneinaforest partnered with Missoula’s Historic Wilma Theater ) for the first annual Spring Film Festival. Hasalyn and her partner Logan Modine, hand selected, curated, marketed, and hosted the event to great success – a nearly full theater and four hours of short films.

In August, 2010, Aloneinaforest launched a companion blog aimed at creating a conversation with fellow artists, friends, designers, and writers about anything they deem “interesting.” The Alone Blog was voted “Missoula’s Choice : Best Blog” in 2011, by the community at large.

Of her projects to date, Hasalyn says, “It is an incredible feeling to watch an audience watching your work. There is nothing like it. The blog is an extension of that – it’s an honor to know that thousands of people read what we have to say each month – even better is to learn that what we wrote inspired people to make their own art.”

We’re in post production for our latest film project “The Way of Blood.” It’s Part I of a digitally animated short about revenge in our imagined fairytale Japan. We wrote it in English and had it translated into Japanese. We loved the idea of making a “foreign” film in Missoula, MT. The work now is creating a landscape of sound and animating over our actors frame by frame.

I liken myself to a vampire, because I get most of my sleep while the sun is still up. I actually go to work at 2:00am to produce the morning news at NBC Montana. From 5:30am – 8:00am I read it live. The perk to producing is that I actually get to control my content – so I’m not just a “talking head.” And…I was already awake for the “Royal Wedding.”

Up until recently, I was in school and also taught screenwriting and production to undergraduates at the University of Montana.

These days I am hitting the gym more after job #1 – my main goal is to be Conan’s Valeria, but I have a ways to go.

Trends that excite you?

1. I feel like we’re in the midst of an evolution in storytelling. A lot of folks are getting “published” either in blogs or by Amazon and even more people are expressing themselves online through Storify and Intersect – even on Facebook and Twitter. Journaling is in real time now – and it’s fun to take in. I can lose hours observing transformations of people’s online selves.

2. The affordability of film production equipment these days is awesome. DSLR’s make great quality video – so if you have a good story, there is a chance you can actually produce a film quality project. It raises the bar for everyone – which I think it terrifying and terrific.

3. Access to information via the internet. By that I mean, we used to just go online to find text documents about this or that – and now, we go online and find those documents and then talk to the online community about them. It feels strangely honest

I have a collection of notebooks, but they’re never handy when I need them – so I’ve taken to keeping ideas in my Dino-berry (ye old blackberry). At any given time, I have seven or eight lists of ideas (businesses, blogs, stories, observations, etc) stored in my memos.

After a couple of days of being consumed by an idea, I’ll brainstorm it with Logan. And generally, it’s just matter of time before we dive into action after that point.

Sometimes ideas have to fester and then rise to the surface again, when the moment is right. I’ve found that to be true with many story ideas in particular.

I am really inspired by the prospect of showing my work – I always get a flash of the end result or big goal of a project when I’m just starting it. Sort of like reading the last page of a book first and then working through the book to have that aha moment again.

I’m also really inspired by other people doing good work. When I see creative stuff happening, I can’t help but want to be doing it myself.

What is one mistake you made?

I’ve learned the key to happiness at work is to doing what I love. Those are often the things I’ve found I’m better at anyway.

What is one business idea that you’re willing to share with our readers?

We’ve talked a lot about building an online space for artists in smaller cities. As film students we were always looking for actors / gear / locations / crew / etc – and if there was a space where people in that specific community could connect, it would be great.

I’m all about building communities – virtually and actually.

What do you read every day and why?

Because of my day job, I read a lot of news. A lot. I read the top fold of the New York Times every morning – and I read our local newspaper, The Missoulian. I read the court calendar and the legislative calendar (when it’s in session). I read most of the newspapers printed in Montana. Once a week I read Rob Brenzy’s Free-Will astrology.

I have a host of blogs in my routine – art / cooking / design. And I unabashedly pour over Facebook and Twitter. People say and do interesting things!

Oh – and I’m moving out of reading books about film each night and back into fiction. Which makes my brain and heart happy.

What one book do you recommend to our readers and why?

ONE BOOK? If you saw my saggy bookshelf, you’d see why this might be the most difficult question so far.

I guess if I had to choose, I’d say “Everything Is Illuminated” by Jonathan Safran Foer. No, it’s not a business book – it’s straight up fiction. I love playing with language – and Foer mangles it and reinvents it in this book. And it’s about EVERYTHING : love, history, mortality, memory, and storytelling. I’ve read it five times – at least…

What is your favorite gadget?

Well…the iPhone just arrived in Montana. I don’t have one yet, but I’m sure if I did, it top my gadget list. Alas, I’m a slave to my Dino-berry.

My favorite gadget though, is my camera, which travels everywhere with me. Photo albums hold secrets that only my eyes can decode, they’re a very special type of journal.

Who would you love to see interviewed on ideamensch?

One (or more) of the creators of SXSW – Louis Black, Nick Barbaro, Roland Swenson, or Louis Meyers. That festival is supremely cool.

And didn’t some kids from MIT just invent a flying car? They’d be an interesting interview too.

Selfishly, I’d love to read David Lynch’s answers to these questions – did you know he does a weather report every day online?

Why move out of broadcasting?

What I’ve loved most about producing and anchoring news has been the work I’ve done behind the camera – building the show, lining up interviews, writing stories and also the relationships I’ve formed in that position. Besides, my news hair was never very good anyway.

What do you wish you could invent?

A teleporter. My cat hates to travel, but I really want him to see Iceland, and I’ve convinced him of the relatively low risks of us being rematerialized as a human/cat abomination.