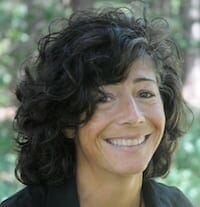 [quote style=”boxed”]By talking about them with other people. All it takes is for a couple of people with even tangentially overlapping interests to bounce some ideas off each other and something really creative will develop.[/quote]

Henriette Lazaridis Power is a bit of a slow reader because she always hears the narrative read aloud by some imaginary voice in her head. While this was an occasional annoyance during her fifteen years as an academic, teaching English literature at Harvard, it also gave her an appreciation of audiobooks and of literature as performance. Wishing there was an audiobook equivalent for short fiction and essays, she began to scour the internet for a literary magazine publishing in audio, and found that there wasn’t anything quite like what she had in mind: a website that would feel as much as possible like a magazine, with monthly issues, but instead of text would publish mp3s. She decided in late 2009 to found The Drum, a literary magazine that publishes short fiction, essays, and novel excerpts exclusively in audio form. Since launching in May of 2010, The Drum has published more than sixty pieces of Literature Out Loud from emerging writers as well as established writers like Susan Orlean, Jenna Blum, Ben Percy, Jennifer Haigh, and many others. In addition to editing The Drum, Power is a writer whose fiction and essays have appeared in Salamander, New England Review, Camera Obscura Journal, The New York Times online, and The Millions. Her novel CLEAN MONDAY will be published in 2013 by Random House/Ballantine.

I’m gearing up for Grub Street Writers’ Muse and the Marketplace conference at the end of April where we’ll be recording flash-fiction for our second annual MuseFlash contest, recording contributors who’ll be in town for the conference, and celebrating the first anniversary of our launch. So I’m working out logistics for everything from whether we should build a portable recording booth, to how many mics we’ll be able to have set up for our various recording needs. I’m also preparing our first five months of audio for distribution on iTunes and also setting up a podcast.

Every day is different, but it’s often a jigsaw puzzle of meetings with potential partners (in various audio-related collaborations), reading submissions, emailing with those aforementioned collaborators, some social networking, and meeting with contributors (if they’re local) to record their work. If it’s a Friday, I’m editing the sound file and preparing it to go live on the Monday, and writing up the weekly newsletter that we’ll send out on the Monday morning to let people know what new audio is up. Because I’m a writer too, I make time for my own writing most days as well, whether it’s a blog post or an essay I’ve got going, or fiction I’m working on. And there’s almost always exercise. I like to be able to do something each day that is purely athletic and rowing is my sport of choice.

Audio: I do see audio really coming into its own once again. I’m excited to see more and more people recognizing the incredible ease of audio recording and the various simple ways there are to share it.

E-books: I love physical books, and I love the serendipity of browsing an actual bookstore. But that doesn’t make me view ebooks as evil. We’re just at the start of what is likely to be a vibrant (and not necessarily parasitic) relationship between physical and digital books. In my view, the emergence of ebooks will spur innovation in the physical book publishing world (as it’s already started to do), and I’m optimistic about the new ideas that will emerge.

Scent: Maybe it’s not quite a trend yet, but museums, critics, and artists working in various media seem to be thinking more about scent, considering fragrance as an art form. I’m looking forward to the exhibit this fall at New York’s Museum of Art and Design, curated by Chandler Burr, about the design of scent.

By talking about them with other people. All it takes is for a couple of people with even tangentially overlapping interests to bounce some ideas off each other and something really creative will develop.

It’s been my experience with The Drum that people want to collaborate. And I find it tremendously inspiring that people actually prefer to share ideas and to brainstorm, rather than to work in isolation. On a specific level, whenever I feel as though The Drum has a long way to go, I remember that when Eve Bridburg founded Grub Street, Boston’s creative writing center, she had only eight students. Fourteen years later, Grub Street has thousands of members. That’s a truly inspiring example.

A very practical one: I recorded an important author interview, but recently discovered that half of the interview file was lost. I have now made it regular practice to set up the Zoom H2 to record the audio in addition to the nice condenser mic I use. Audio–especially an interview–isn’t like text. I can’t just ask the author to send me the file again if I lose it.

Creating little cards with promo codes on them like the cards you see at Starbucks giving away free songs. We would hand these out at literary events to raise awareness of the magazine and to get people listening to our soon-to-be-available back catalog.

Does it count if I haven’t read the book (yet)? Scaling and Biology edited by Geoffrey West, because he’s a physicist who does interesting work on cities (and thus on networks of people and on what happens when large groups of people live and work together or at least in proximity with each other). This book apparently looks at system structure from from small to large scale and is, I think, highly relevant to our interconnected lives.

I’d have to say it’s my iPhone on a truly daily basis–especially the Voice Memo app that allows easy, decent-quality recording by anyone, no expertise required. I use it to record the occasional audio blog post, and I’ve used it to record a Stories on the Street piece for The Drum. Besides that, my Zoom H2 recorder is compact, indefatigable, and a dead-easy way to record excellent audio on the fly.

Andy Hunter, editor of Electric Literature. The magazine makes the most of all the media formats out there, but he’s also behind the creation of Broadcastr, which makes it exciting and fun and easy for anyone to tell a story and share the audio with thousands of users.

How will The Drum be able to stand out if, as may indeed happen, other magazines enter the audio-only market?

It’s true that there are no barriers to anyone else seeking to enter the market. But just as there is more than one print literary magazine, there can be more than one audio-only literary magazine (there already is at least one other: Bound Off). It will come down to the editorial choices we make, and to the kind of writers we choose to publish. Readers/listeners will come to The Drum because of our particular style.

How have you handled disappointments or setbacks?

I’ve been lucky to have had few disappointments so far with The Drum, but it’s inevitable that they will happen. I think the most important thing is not to try to avoid failure, because then you’ll be too cautious; you’ll miss out on exploring new ideas. When you do encounter a setback, the key is to recover well, without panicking or tumbling into despair.