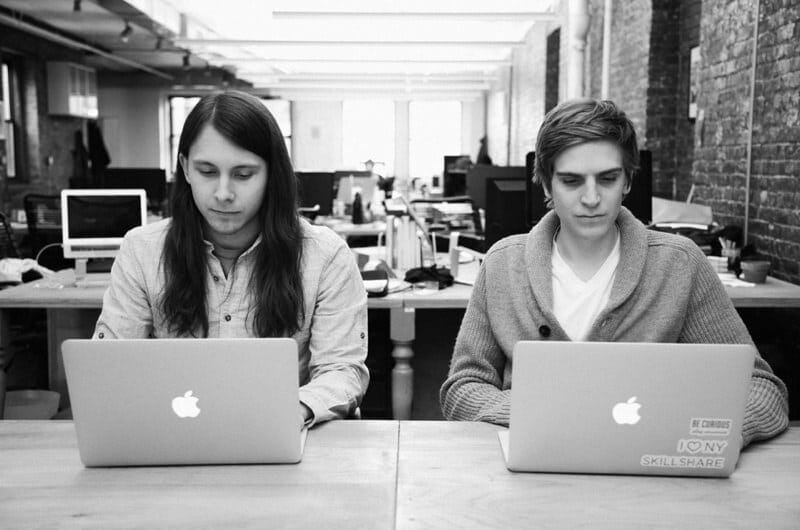 [quote]We are an action-oriented type of team. We are always trying to move the ball forward. We do this by keeping our process nimble and agile. We believe the best way to bring ideas to life is to ship them now and iterate.[/quote]

Jake Przespo got into design back in the signature days. Yes, the signatures that were on all forums years ago. It eventually turned into a curiosity for the web.

Andrew Mercando split his time between drawing and computers as a young kid, eventually leading to an interest in user experience design. We both came from larger companies with acronyms for names (GE and R/GA) but we were each immediately lured away by the idea of Skillshare. Jake started by freelancing for a bit and eventually got hired as the company’s first Product Designer. A few months later, Andrew joined the team after a party we threw at the office. We’ve been running full speed ever since.

We’re working on Skillshare, the online marketplace to learn anything from anyone, anywhere. As the design team, we build the Skillshare brand through our online product. We’ve got lot of new and exciting things in the pipeline that will transform the way people learn both offline and on.

Where did the idea for Skillshare come from?

Michael, one of our co-founders and CEO, played in the World Series of Poker a few years back. When he returned home, all of his friends wanted him to teach his poker skills so they could follow a similar path. That, coupled with Sir Ken Robinson’s TED talk, sparked the idea behind Skillshare.

We are each trying to get better at waking up early, perhaps 6:30–7, and catching up on some small tasks. Everyone usually heads to the office between 9:30 – 10, then we do our quick product team check-in, run through some emails, and start the day’s work. We’ll be heads down until 12:30 or 1 when we grab a bite to eat. We also try and get out of the office in the late afternoon to our favorite coffee spot, Saturdays Surf. We have an anti-meeting culture at Skillshare, so most of the day is collaborating in small teams and executing on projects; more action than talk.

We are an action-oriented type of team. We are always trying to move the ball forward. We do this by keeping our process nimble and agile. We believe the best way to bring ideas to life is to ship them now and iterate.

Collaborative consumption in general is super exciting. The idea that people can utilize their own communities really empowers individuals to ultimately live a better life. There are a lot of industries that are ready for this type of transformation.

I (Jake) worked at a job that didn’t have a CMS to manage their site. It was a real pain in the ass.

If we could go back, we’d be more data informed from day one. It helps better create our strategy when designing and less shooting from the hip.

Talk to more people outside of your organization, especially a mentor-like figure. We knew this was a good idea, but didn’t actually do it until recently.

An easy way to pay rent with a credit card. Somebody please figure this one out!

When trying to make a decision, professional or personal, we often ask ourselves, “What would Rick Ross do?” Everyday we’re hustlin’.

Hipchat because it allows us to constantly communicate and share designs with each other. We love Rdio because we like albums over playlists and are fans of Wilson Miner. Our third is Venmo. We use it all the time when going out to lunch or drinks on the weekend.

Both of us read “Designing for Emotion” by Aaron Walters recently and really enjoyed it. He goes over how the design of products should have more human aspects in them. It is important that users feel like there are real people behind the things we build.

Gotye, Future Islands, and Skrillex. We obviously can’t leave out the regulars like Yeezy, Weezy, Jeezy, and Ricky Rozay.

@mdo — Mark is a great designer at Twitter and helped create their front-end framework, Bootstrap

@jack — The guy runs two awesome companies, how can you not follow him?

We’ve been teaching a class on our design process a lot and we tend to crack jokes at each other throughout to make it more enjoyable. There’s been a few times where we get the whole class laughing with us, or maybe it’s at us. Oh well.

Aside from the obvious ones such as Steve Jobs, Dieter Rams, and Batman, we are big fans of Ben Barry who is a designer at Facebook. He’s been able to carve out his own department and provides a tremendous amount of support to Facebook’s brand.

What’s your professional learning curve like since joining Skillshare?

For each of us it took a few months to unlearn habits and tendencies from our previous jobs, both at huge companies, and adapt to working at an early stage startup. Things move so fast, we release things that are not completely polished, and we all wear hats that don’t fit our heads when we need to, it took a bit of getting used to.

What would you love to learn this year?

Andrew – Fly fishing. It just seems so relaxing and I love trout.

Jake — I’ve been dying to learn how to sail. It looks like the most relaxing thing I’ve ever seen. My goal is to own a sailboat later in life.