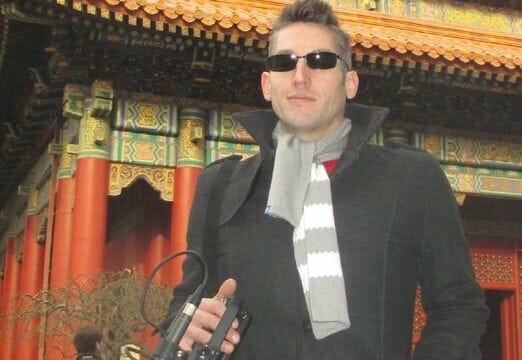 It isn’t easy to break through the ceiling to success, but the journey is one that crafts respect in yourself, your product, and others who push through adversity.

Jarrod Fidden hails from a family of ‘captains of industry’ – his father a Director of Kellogg’s (Australia) and grandfather Managing Director of RCA (Australia) – not the pedigree one wants as founder of an ‘awake’ company.

Faithfully served the security industry for ten years as a Bodyguard, Security Trainer and the Security Manager of some of Sydney’s top nightspots- including Hotel Cremorne, The Roxy- Parramatta and Northies- North Cronulla.
Realizing his creative drive was being self-stifled, he studied a Bachelor of Communications and Media Studies (Screen Writing and Advertising & Marketing double majors) as an adult (2009-12) and promptly begun writing content for mainstream production.

Understanding that with the ubiquity of the internet, the ‘conspiracy market’ and the ‘alternate media’ was now a force unto itself (even if shoddily produced in the main) he engaged upon providing this massively growing market with social platforms and quality content-tailored to this emerging market force.

Wide Awake Media was born in 2016, with it’s first venture, Awake Dating featured in over 500 print, broadcast and online articles in 7 languages.

Where did the idea for Wide Awake Media come from?

My wife Aine and I discovered a plethora of ‘socially inconvenient truths’ together, and in this process of ‘waking up’ we were astounded at the amount of truth, truth tellers and content creators in the space, and genuine concern in the ‘awake’ populace over the state of human affairs. We also saw that it wasn’t achieving as much impact as it should upon the mainstream narrative, and not yet brining change. Based on our particular skill sets, our drive to bring a pro-humanist future for the betterment of all, and the fact that the ‘awake’ market (oft maligned as ‘conspiracy theorists’) is booming- yet they were yet to have dedicated social sites or a credible media network of high production value, we launched the first venture of Wide Awake Media- Awake Dating – in April 2016.

Wake to our family based alarm clock (our three daughters) around 8am, check emails for anything time sensitive, coffee and a simple breakfast with my family, then into three or four hours speaking with my network, responding to emails, working with our design and development teams, and general business duties before lunch. I usually take some ‘me’ time of around thirty minutes to relax after lunch- disconnecting from devices and reading or writing. Then its more WAM business duties until around five PM when it’s time for dinner and an hour or so with my family. Then another two hours working on WAM business, a bit of play with my daughters, then China wakes up and I’m doing the same (mostly via WeChat) with my Chinese partners on our other company (chinateaching.co), until around 10pm when my wife and I watch some content and chat before bed around midnight. It’s productive because I have a set schedule to work with daily, it does vary based on daily occurrences, but by having a set schedule there is always a plan to revert to- even as the necessities of change divert your routine.

Action. As simple as that. Ideas are like assholes- everyone has one- but at some stage you have to back yourself, back your idea, and just get cracking. You don’t need to be wholly or even partially funded to make progress. You just have to DO. Through action and delivery you will meet others of like mind to assist, and everyday will always equate to progress.

Cryptocurrencies and the movement of VC funding into ICO’s.

Judicial and constant self analysis and benchmarking. We all make mistakes, it’s learning from them that makes them worthwhile. And set yourself targets and work to them- the only person you should ever worry about not living up to is yourself.

Stop working for others. Back yourself. The only time is now.

That money is a fiction, and a privately controlled one. The fact that the Federal Reserve is not part of the government or in any way owned by the people, and is in fact a privately owned bank that invents money out of thin air- and at debt and interest to the people, is a wholly unpopular fact. Of course it’s the central premise of being ‘awake’- so there are approximately 100,000,000 people who are aware of this- and hence agree. But it’s a hard premise for many to swallow if they’re yet to research this topic.

Keep pushing through adversity. Earn it. The boldest and most successful entrepreneurs of our time didn’t achieve their success through shying from rejections, or running from their vision when times got tough. It isn’t easy to break through the ceiling to success, but the journey is one that crafts respect in yourself, your product, and others who push through adversity.

Grassroots authenticity combined with a comprehensive digital marketing strategy and a willingness to engage press. As the ‘awake community’ is one highly skeptical of any companies, parties of influence, and even individuals who operate in the social media and media content space, for us being universally known among our market as being an awake family that has put their all into our company- capital, time and drive, and demonstrating that we are in fact not ‘controlled opposition’ or part of the NSA- but an awake family driving for pro-human change with their all. Our digital strategy was aimed at both the conspiracy audience, as well as commentators and influencers. This saw mass media comment and appeal, which in turn promoted interviews and discussion. And when the interviews come, we’re prepared to engage- even if we understand the narrative will likely be spun to one of contempt or humor on our beliefs and community.

Making a C Level hire digitally. It’s impossible to hire a quality individual with an aligned ethos, and one you can grow with, simply via multiple online conversations and chats. Having a remote and decentralized workplace is not necessarily a bad thing, but hiring for key roles without actually meeting face-to-face with key hires- before making commitments, is something wont to backfire. Never again.

Energy neutral and sustainable crypto-mining. Using geothermal, solar, water turbine and wind as a power source for crypto mining on micro and massive scales- rather than the carbon heavy mining operations we presently see globally.

Gifts for my eldest daughter for her fourth birthday. And with our two year old not to be left out- some gifts for her on her sisters birthday. The joy and creativity that arts and crafts materials and games bring our girls is amazing. Children flourish with each new input, it’s fascinating watching and fostering tiny people, as they grow into the individuals they will be.

Slack is a great tool for development. Not having a technical background, it’s an easy tool to work with your project management, designers and developers- where tasks, files, communication and progress can be easily made and tracked.

“Economic Warfare” by Ziad K Abdelnour. A fantastic discovery by a much respected wealth creator, and one that goes behind the curtain of the financial scape and banking, allowing an understanding of the true machinations behind the scenes- and knowledge to help you empower yourself.

Woodrow Wilson signed the 1913 Federal Reserve Act and allowed the establishment of a private central bank issuing the USD at debt to the government and people. Reflecting on his action he later wrote: “I am a most unhappy man. I have unwittingly ruined my country. A great industrial nation is controlled by its system of credit. Our system of credit is concentrated. The growth of the nation, therefore, and all our activities are in the hands of a few men. We have come to be one of the worst ruled, one of the most completely controlled and dominated Governments in the civilized world, no longer a Government by free opinion, no longer a Government by conviction and the vote of the majority, but a Government by the opinion and duress of a small group of dominant men.”