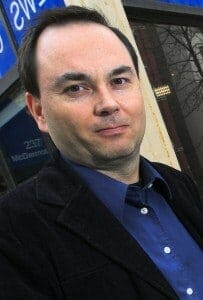 John White is a geek, tech-junkie and journalist.

This proves to be an effective combination as Deputy Editor, Online for the Free Press.

John cut his teeth in the Sun Media chain after graduating from the Creative Communications program at Red River in 1992. He started his career in Portage as a fill-in before shifting to the Kenora Daily Miner and News for a 3-year stint as sports and music editor. He ventured forth to the wilds of Edson, Alberta to work as editor at The Edson Leader for the next 3 years.

A move to Calgary to work on the news desk as a copy editor preceded the return to John’s hometown of Winnipeg, where he worked at the Winnipeg Sun for 5 years in various roles, including auto editor, city editor and assistant managing editor. A meaningful foray into public relations followed as John worked alongside the communications managers at Investors Group.

Showing an entrepreneurial bent, John started Canada’s first online-only news site, winnipegfirst.ca in 2007. While the concept proved popular, the lack of capital combined with a flat online sales market meant a short run. He was hired by publisher Bob Cox soon after to work with the online sales and development teams before shifting back into his comfort zone in online editorial work managing winnipegfreepress.com.

When not continuously tweaking the website or feeding Twitter, John White can be found curling semi-competitively in the Manitoba Curling Tour and making loud music-like sounds while playing Rock Band with friends.

Exploring ways to bring a more engaged audience and meaningful revenue to the digital side of the operation to ensure long-term viability of our company.

Where did the idea for the Winnipeg Free Press News Cafe come from?

Publisher Bob Cox brought the concept back from a journalism conference and I fleshed it out with a complete business plan.

I talk them out with my wife for a non-journalist viewpoint, throw them at Google to see if they’ve been done before, and if so, what are best practices?

– Exponential availability of technology and access to information which pushes transparency in journalism.

– Second-screen experiences for live events like sports or award shows.

– The emergence of community activism in citizen journalism.

Cleaning the ditch behind Winnipeg Stadium after the Red River Exhibition in the summer… learned how much I despise it when people disrespect the environment with litter.

I would pair up with someone with a background in executing successful business startups.

The business plan for the news café. A summary is available if you Tweet me.

The Steve Jobs Way by Jay Elliot, not as a direct how-to but as a way to innovate in challenging times.

If you weren’t working on the News Café, what would you be doing?

I would be coming up with new ways to deliver digital content and build audience.

– ibogost because he is a genius innovator.

– SarahKSilverman as she is crazy funny.

– BillGates because he is prolific and accessible.

While watching the Simpsons Halloween show, and it was a fart joke.