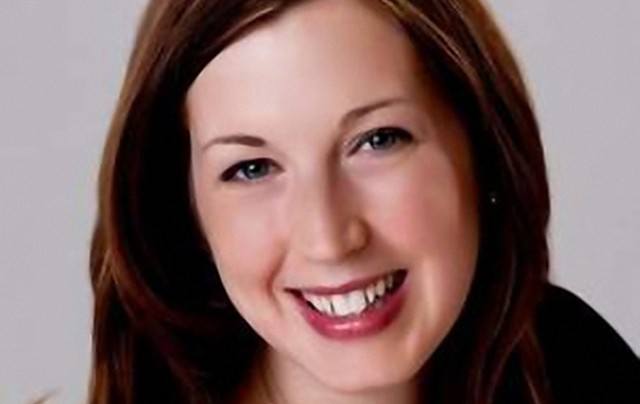 [quote style=”boxed”]You can doo a lot of thinking scooping poop! But I don’t doo as much pick up as before, so a lot of my idea generation done while running outside, running to meetings or just playing with our pugs. I believe ideas can happen anywhere and you just need to be ready to embrace them.[/quote]

Jolene Loetscher grew up among the farm fields of Nebraska and now calls South Dakota home. She graduated as the top broadcast journalism student from Northwestern University in Evanston, Illinois and received her MBA in Global Executive Leadership from the University of Nebraska-Lincoln. Starting at age 19, she worked as a television reporter/anchor for KTIV-TV (NBC) in Sioux City, IA and KELO-TV (CBS) in Sioux Falls, receiving regional and national awards for her writing and live reporting. Her work appeared on CNN, MSNBC, CSPAN and The Weather Channel.

Jolene moved into public relations, working in media relations at Sanford Health, helping guide the nation’s largest rural not-for-profit hospital through regional and international expansion, and receiving more than $10 million annually in earned media. She’s worked with The New York Times, Wall Street Journal and Ad Age to pitch, place and in some cases write stories for clients. Jolene continues her on-air work with freelance government and sports reporting covering South Dakota, North Dakota and Minnesota markets. She and her husband started DooGooders, a dog doo removal service, in 2007 and received recognition for its marketing campaigns. DooGooders currently sells licenses for locations across the country. They also founded Mud Mile Communications, working with local, regional and international brands to develop social media, online, video and communications strategies. She also founded Selfspiration, an organization to help victims of child sexual abuse through legislative changes and the creation of a day camp.

Jolene calls Sioux Falls, SD home with her husband and business partner, Nate Burdine, and their pugs Maggie and Mayhem.

As Chief Doo Officer for DooGooders, right now I am focusing on expanding our crappy service, selling licenses around the country and implementing a new service, dog DNA testing. This allows our doologists to test poo with PooPrints technology (especially in condos, homeowners associations and apartments) to figure out when someone doesn’t doo what they should doo. Since we give away 7-percent of sales to charities, I enjoy learning about new organizations that can benefit from some doo dollars. I am also juggling some new marketing/PR projects through Mud Mile Communications and working on my passion project Selfspiration, developing a non-profit for survivors of child sexual assault.

Where did the idea for DooGooders come from?

We lived with some friends while trying to sell our house in another town. Their two dogs, Bubba and Skinny, both boasted very efficient bowels. We decided to help out our friends, both working parents. And after an afternoon of poo pick up, we realized how great it would be to just pay someone to deal with doo. A few months later when I decided to get my MBA, my husband Nate and I wanted a way to make some extra money. Then we remembered our crappy idea to pick up poop!

I usually get up around 5 a.m. and meet with a training group (right now I’m preparing for a Tough Mudder in Wisconsin, so this may be a posthumous piece after May 19). That’s about the only consistent part of my day. From there, I can be in meetings, planning PR or marketing projects for companies down the street or across the globe or pitching the latest poo technology. My days usually end around midnight or 1 a.m.

You can doo a lot of thinking scooping poop! But I don’t doo as much pick up as before, so a lot of my idea generation done while running outside, running to meetings or just playing with our pugs. I believe ideas can happen anywhere and you just need to be ready to embrace them.

I am so excited technology gives small communities the power and the potential that previously could be limited by geography. Our rural towns plant, nurture and grow some of the most incredible visionaries combined with a work ethic and passion for dooing good.

Picking up poop can be crappy (especially when you run into Danes with diarrhea or poodles with puddles of poo after they ate boxes of Crayons), but it taught me you need to know your industry from the ground up (literally in some cases). But I would take poop scooping any day over my job at an insurance call center turning lines pink on a spreadsheet. It taught me grey cubicles can suck energy, enthusiasm and ideas for growth right out of your brain and that work environments should always utilize people’s strengths, and employees should get more than a paycheck for recognition of a job well done.

I’d love to say I would do everything the same. But, I think I would just be more fearless.

As an entrepreneur, what is the one thing you do over and over and recommend everyone else do?
Stumble. Take a journey and some times the trip includes tripping along the way, but that’s how you learn, grow and figure out what really works.

Just one? I think it’s about learning to not get absorbed in what others think of your ideas. Some people will never understand why you would want to take on the risk of starting something new, but you need to focus on those that just understand the rewards that come with being an entrepreneur.

Ummm…. can I shamelessly promote buying a DooGooders license and starting a poo pick up service in their community? Actually, we created an idea of a Board of Learners, in an informal matter, to help guide us as entrepreneurs and people. We just pick a few people that we admire and respect and try to make a conscious effort to catch up with them every so often for a laugh and advice.

I want to change the stigma that surrounds sexual abuse, especially child sexual assault. As a survivor, I know how that can hold people back from coming forward and create a culture of fear that only protects perpetrators. After speaking out about my experience as a teenager (Selfspiration.com / TEDxSiouxFalls.com), I started Selfspiration, a non-profit dedicated to helping survivors of child sexual abuse through legislation and the creation of a day camp. This year we passed legislation in South Dakota to remove the statute of limitations on most cases of rape. I am also working on Selfspiration day camp, a place where kids who’ve been abused can feel strong and empowered and where adult survivors can put purpose to what happened to them by helping staff the camp.

Google Docs – Our businesses use Google Docs for collaboration on projects and staying organized (or some semblance of organization).
Thesaurus.com – It always helps with writers block! And the grown-up version of the only thing I wanted for Christmas at seven years olds, a dictionary (I still own that dictionary!).
NYTimes.com – I will always be a news nerd, even after seven years as a television journalists, I can’t quite give up geeking out on a new story.

Underwear! by Mary Elise Monsell. My mom, a first grade teacher, gave me the book years ago and it remains one of my favorites. It’s about Bismark the Buffalo who needs an attitude adjustment and finally learns from his friends how to enjoy life with funny underwear. It can be so easy to forget to enjoy life, but told in such a simple way, Underwear! reminds us to not be crabby like Bismark and relies on our friends for the best parts of life.

@hughweber (Hugh Weber) – I consider Hugh one of the biggest thinkers I ever got to work with. Hugh believes that big ideas do not limit themselves to big cities, but brilliance can be built in the smallest, most humble of hometowns.

@SwearengenCD (Al Swearengen Creative Director) – I adore Deadwood (the show and the South Dakota town itself) and this combines one of its greatest characters with a business made for his foul-mouthed, hard-living ways. When I just need to laugh, this is what I read.

@joshallan (Josh Allan Dykstra) – Josh’s blog on strengths-based leadership and the work revolution always inspire me to be a better business owner. His ideas seem even more relevant as we watch an evolving economy that changes the landscape of how we work and live.

Probably this morning when I woke up to two pugs farting in my face. Somehow I managed to discover an alarm clock worse than an actual clock.

My family. My husband, parents and sister always stand by me, no matter the challenges or crazy ideas. They remind me that when people believe in your ideas, they believe in you. Plus, they can always make me laugh, if it’s by making a cherry pie with salt instead of sugar or chasing mice out of their house.

What’s the hardest part of your spouse being your business partner?

We met at work, so it’s harder for us to not work together than always hang out. But the biggest challenge is that we work in different ways. I will keep seven or eight windows open on the computer and bounce from one idea or project one minute to the next, where Nate remains very focused.

If there were 25 hours in the day, what would you do with the extra 60 minutes?

I would love to say I would write more, which I wish I did a better job of just making time to do, but honestly, I would probably just take the time to watch some mindless television, like the Real Housewives (just about any city would do).