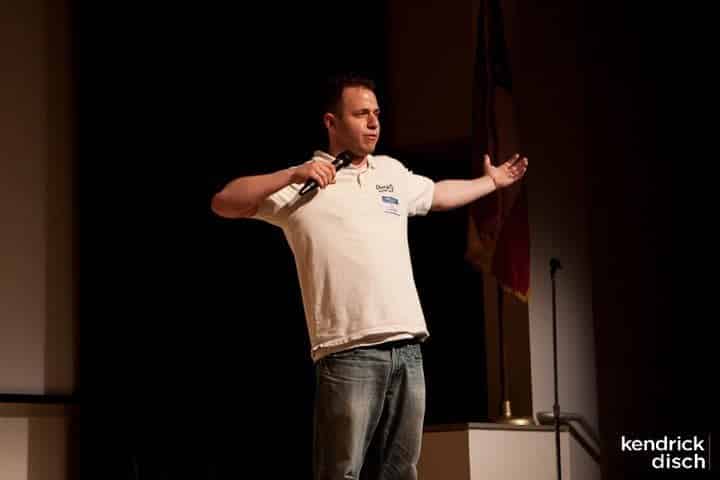 [quote style=”boxed”]Test them.  The Internet has made it so easy to inexpensively and quickly test almost any idea.  I am big on testing, even if it’s just going to 2 networking events, talking about your idea with 30 people and gauging their reactions.[/quote]

Jonathan Kay leads the daily operations and strategic direction for Apptopia.  He is the point person for anyone trying to sell an app, buy an app or become a revitalization partner.  Jonathan is passionate about branding and storytelling.  As someone who believes deeply in the importance of customer engagement, he is constantly striving to find scalable intimacy.  Jonathan originally made a name for himself in the startup community as the ambassador of buzz at Grasshopper, a company that provides virtual phone systems for entrepreneurs.  He created its “Buzz Department” from the ground up and was responsible for over 600 press mentions and a handful of big partnerships over 3 years. Jonathan is the author of Learn2Buzz and a co-founder of the Barcamp Tour.

More than anything, Jonathan loves meeting new entrepreneurs and helping them create what they are passionate about.  When he isn’t helping people broker their mobile apps, he is watching sports with friends, primarily the Boston Celtics, New York Giants and the Boston Red Sox.

I am building a marketplace to help broker the sale (acquisition) of mobile apps.  I want to create an exit strategy for mobile app developers while creating an opportunity for business minded entrepreneurs to invest and get involved in the mobile world.

Where did the idea for Apptopia come from?

In 2009 my partner created an app called GPush, which at the time was #17 among downloaded paid apps.  You can imagine that it was extremely profitable.  However, no matter how hard he tried, he could not figure out a way to sell it.  He couldn’t even figure out the app’s value.  It didn’t make sense.  Why wasn’t their an exit strategy for these micro businesses?  Then, in 2011/2012, we started to notice the market getting extremely saturated (I mean, there are apps to help you discover apps…) and realized it was time for an idea like this.

At this point, my day looks very much like an old school broker/investment banker.  I run our marketplace completely offline, so I spend most of my day on the phone with sellers and buyers.  When I am not doing that, I am writing personal emails, genuinely trying to reach out to successful people I respect or getting involved in developer forums.

Test them.  The Internet has made it so easy to inexpensively and quickly test almost any idea.  I am big on testing, even if it’s just going to 2 networking events, talking about your idea with 30 people and gauging their reactions.

Brands starting to become more human and transparent excites me.  Not only that, but I love seeing smaller brands succeed and surpass bigger brands with this strategy.  One example I love is MailChimp.  Those guys had fun, got involved in the community and now absolutely dominate Constant Contact.  Did you know that their single biggest marketing expense is free, awesome, really comfortable t-shirts?  How awesome is that?

Right out of college I was a client facing recruiter for temporary accounting and finance jobs.  It literally ate away at my soul. I had to drink a beer in the shower most nights after work.  I learned how to deal with rejection.  I learned how much more important what the person you are talking to is saying than what you have to say.  It ultimately forced me to be less of a college kid and more of a professional.

I’d read more.  I’d ask more people for help.  I would also have started building valuable relationships during college instead of after.

Take the time to learn about the people I talk to, meet and work with.  Even if I am hopping on a quick call with someone, I spend 5+ minutes learning about him or her.  Humans really appreciate people who take the time to learn about them and to listen.  There is no more effective way to be memorable.  Learning 1 or 2 interesting facts about someone can end up going a very long way.

About 9 months ago, I wanted to create a tool that was essentially hellobar.com for companies’ internal portals.  It was essentially a gentle and welcoming notification when a customer logs into his or her account.  It would prompt him/her with certain relevant information. The tool would learn about the user and be smart enough to give him/her super relevant information and never give the same piece of information twice.

If you could change on thing in the world, what would you do and how would you go about it?

I would stop big companies from nickel and diming their customers.  For example, my whole life I was a Citizens Bank customer.  I had multiple accounts, a credit card and even a business bank account for Apptopia.  I noticed the other day that I was being charged a $4.99 “service fee” for the past 2 years because I hadn’t been meeting some stupid and uber-specific guideline.  There is no reason for that; it’s insulting, it’s sneaky and it ultimately just makes customers feel helpless and pissed off.  Needless to say, I transferred all 4 of my accounts to Schwab.

Linchpin by Seth Godin because we need more people who care passionately about their niches.  Who doesn’t want to be indispensable?

J Cole and Jay Z – Strange Clouds, Phish – Show of Life, and Cee Lo Green and Vicci Martinez – Love is a Battlefield (I know this isn’t the original version, but I like it better!).

I don’t feel strongly enough about anyone.  I believe in following topics and keywords instead of individual people.

Watching How I Met Your Mother, I love that show.

I’m not sure that I have one.

What is the most unexpected part of starting your own business?

The mental challenge.  No matter who you are or what your situation is, starting a business will absolutely take over your life; you will need to find a way to adjust and cope with that.  Don’t let it catch you off guard.

What is your favorite non-work activity?

Watching sports.  My allegiance lies with the Boston Celtics, the New York Giants and the Boston Red Sox.