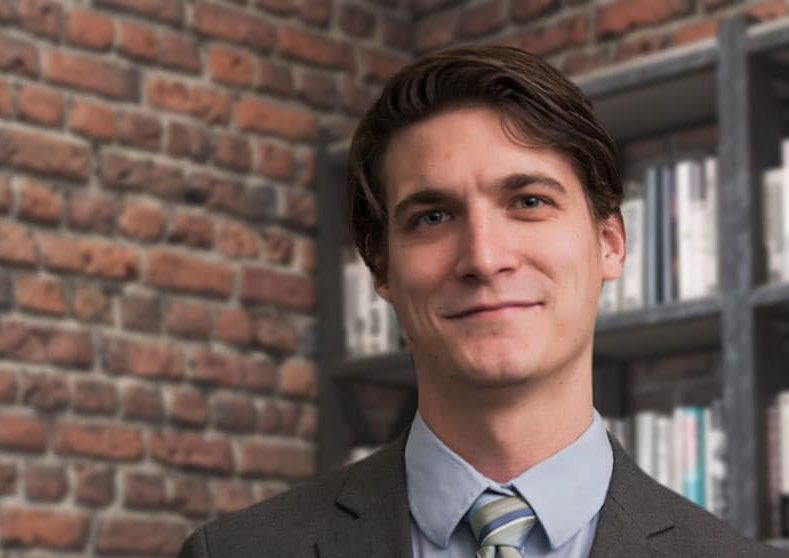 Jorden Rutledge always enjoyed thinking through arguments. While he was in college, he met a few lawyers and found he really enjoyed their debates and conversations about legal issues and upcoming legislation. This positive experience encouraged him to consider the legal field as a profession, and ultimately, he decided that was the path he wanted to take.

After receiving his undergraduate degree in Political Science at Missouri State, he then began his legal studies at Washington University in St. Louis School of Law.

While in law school, he had the opportunity to be a law clerk for Carver, Cantin, and Grantham, a judicial extern for the United States District Court for the Eastern District of Missouri, and work as a federal public defender in St. Louis. After graduation from law school, he was an associate attorney for Brown & James, P.C and then worked as a judicial law clerk for the Missouri Court of Appeals in the Eastern District.

Jorden currently works a judicial law clerk at the United States District Court for the Eastern District of California. After his current clerkship is completed, he plans to focus more on commercial litigation or civil rights litigation.

I decided to go into the legal field because I enjoy thinking through arguments and the mental work that comes with certain practices of law. Ideally, I would like to do things in the public interest as well, and I think law certainly could be a springboard to that.

It is getting harder to make it productive with COVID. Before COVID, I would get up and bike to work and then work out at the gym at the courthouse before beginning my work. I generally like to work in 50-minute increments and then take a 5-minute break, like a walk or something. I also like to take a walk for lunch. At the end of the day, I would bike back home. I really think that a lot of my more productive hours come as a result of both working out and trying to meditate and practice mindfulness.

In my profession and role as a judicial clerk, I have not had much room to create. I have to work with the ideas and arguments that are brought before the court by the respective attorneys. I synthesize ideas rather than create them. I don’t make the arguments myself as much as I rephrase them and interpret them.

The interconnectivity of the world is exciting to me, but also kind of terrifying. Smaller events in other places, or even big events in other places, can have repercussions throughout the whole world now. I think we saw that with the financial crisis and things of that nature. An even somewhere else which in the past may have had minimal effect on the world or the global economy, but now it can send ripples throughout it.

Meditation makes me more productive, as well as having a physical distance between me and my phone while I am trying to do things. I started meditation when I was in law school. There was a mindfulness clinic. I did not actually attend the clinic, but I decided to do meditation on my own. I started doing meditation then and I’ve continued to do it. It helps me to maintain my focus.

Enjoy and embrace being edited. As an attorney, you will get heavily edited. My younger self thought everything I wrote was beautiful. That very well may be the case, but there is a lot you will learn from getting edited and taking that to heart will improve your writing. A lot of people, including my younger self, resisted edits and tried to fight back against every single one. It is hard because it is a form of criticism. I wasn’t very good at being criticized. I still am not at times, but I think I’ve gotten better at that.

I think having a phone actually decreases productivity if you use it incorrectly. Phones are frequently used incorrectly, for instance, scrolling through it and not really paying attention, not being present with people that are talking to you because you are on your phone.

Try to take stock of your day every day. Journaling, for example, is a good way to recap your day and consider what you did right or wrong, and maybe even criticizing yourself when necessary.

I always aim to treat everyone with respect. I have gotten jobs before because a judge called a former judge and could not reach her and instead talked to a secretary, and the secretary had nice things to say about me. I know a lot of people who treat people who they perceive as “less than them” with a different level of respect. I do not think that is right. The opposite of that can benefit everyone, including in business and in life.

I basically failed out my first semester in college. I had to drop out at Mizzou and go to a community college. I didn’t have much direction. I didn’t know what I wanted to do, and my grades suffered as a result of it.

Then I refocused my plan on what I wanted to do. I made some long-term goals and my grades rose and I got to where I wanted to be.

Accept edits fully and wholeheartedly. As a lawyer, don’t be afraid to ask questions both from people higher and lower than you.

I use a meditation app every day, and I certainly find that helpful. I physically write on my calendar, and I try to avoid calendar apps.

I think lawyers should read more novels because it helps them to write better. Any Charles Dickens would be good. Underground Railroad by Colson Whitehead is a good book where he breaks a lot of grammar molds, and it can help lawyers to think outside the box when it comes to writing.

Socrates said, “I know that I know nothing.”

• Accept edits.
• Ask for advice.
• Think outside the box, even if you feel constrained as an attorney.