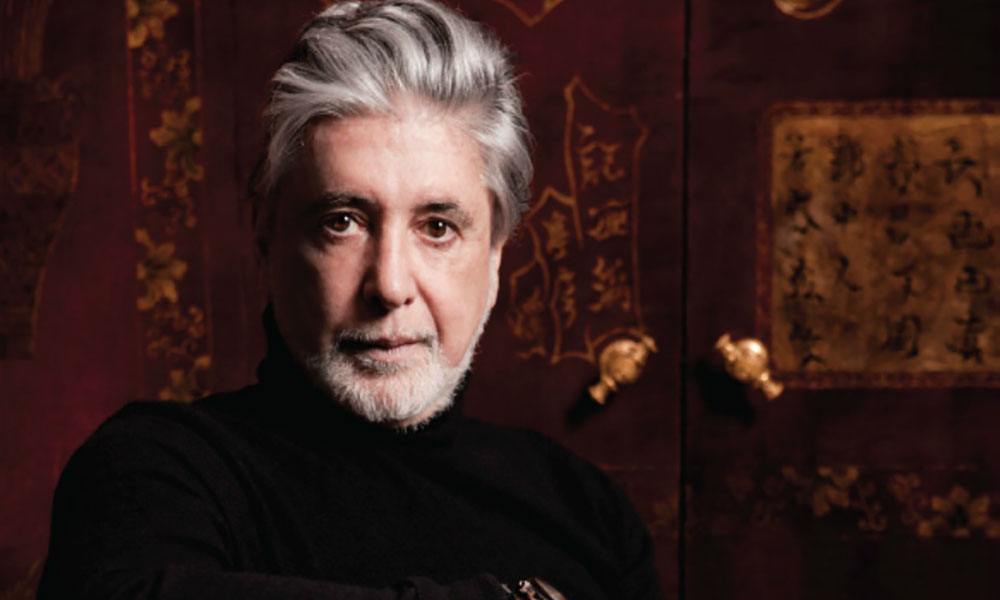 I typically begin my days at 5:45 am and finish when I feel it’s finished.

Juan Pablo Molyneux heads the international interior design firm J.P. Molyneux Studio Ltd. His first studios, opened in the 1970s in Chile and Argentina, were gradually supplanted as the designer’s journey took him to newer and broader horizons. The two studios he now maintains, one in New York (established 1982) and the other in Paris (established 1998), may be separated by time and geography, but they are united by technology the spirit of collaboration cultivated between the teams, allowing for a unique ability to serve clients globally. He has created private residences in South America, the United States, Canada, throughout Europe, and the Middle East. His public spaces include the Pavilion of Treaties for the Russian Federation in St. Petersburg, the Cercle de I’Union Interalliée, in Paris, and the Russian Rooms at the Palais des Nations in Geneva.

The work of Juan Pablo Molyneux has been published extensively in eminent design magazines and other publications throughout the world, such as The Wall Street Journal, The Financial Times, The New York Times T Magazine, Architectural Digest, Whitewall, Tatler, Elle Décor, House and Garden, Harper’s Bazaar, Interior Design, Les Plus Beaux Interieurs, Milieu, and Casa Vogue, and has been featured in numerous books on interiors, including a 1997 monograph on this work published by Rizzoli. Assouline is publishing another monograph in the fall of 2016, entitled Juan Pablo Molyneux: At Home. There will also be a French version, Juan Pablo Molyneux: En Ses Demeures. This lavishly illustrated book focuses on his residences in New York and France as well as his working relationship with numerous highly-skilled artists and artisans who produce the extraordinary furnishings and finishes he designs.

Juan Pablo Molyneux is an excellent and engaging lecturer who brings history and design to life and has been asked to give lectures at numerous museums, cultural institutions, and universities. He has lectured at the Smithsonian, the High Museum in Atlanta, the Museum of the City of New York, The Museum of Fine Arts, Moscow, the Marco Museum in Monterrey, Mexico, the Museo Nacional de Arte Decorativo, Buenos Aires, among many others.

Molyneux has received various awards, among them the Decoration of the Chevalier des Arts et Lettres, which he was given in 2004 by the French Minister of Culture.

Where did the idea for Molyneux Studio come from?

It was a fact – inevitable. It was never an idea – – it was just always going to happen!

I typically begin my days at 5:45 am and finish when I feel it’s finished. There are no “typical” days – – I may be at a job site or in meetings in New York, California, Paris, London, or Moscow. I stay productive by maintaining constant contact with my two offices in Paris and New York.

By producing them! I have a group of exceptional artisans whose ateliers I have worked with for decades to produce custom furnishings, woodwork, embroidered fabrics, painted glass, decorative painting, etc. Through our long working relationship, these artisans have learned to understand and intuit what I want, to realize my dreams and those of my clients. I also have staff producing exceptional 3-D renderings, so that our clients can easily visualize what we will make for them.

I work on numerous projects at the same time; it’s more stimulating to my productivity.

The worst project I ever had was on an island in the Caribbean. I learned not to work for unbalanced people!

Using my imagination. Nothing is impossible.

I can’t say I’ve had any failures, but if and when there are problems, we redo it, if necessary, to make it right.

I gave it as a tip. (My personal and professional lives cannot be separated!)

I prefer to sketch by hand rather than use software. I enjoy the convenience of Amazon.com.

I am not communal, but I would recommend that everyone purchase my new book, Juan Pablo Molyneux: At Home, to be published by Assouline this fall!