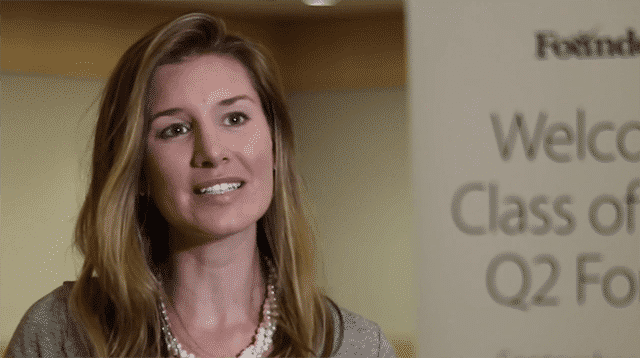 The lesson is: keep agreements simple and don’t give equity away to people who aren’t full-time.

Lydia Fayal is the Co-Founder of AdmitSee.com, a peer-to-peer college admissions resource. Lydia founded the site with Stephanie Shyu in 2012 with the goal of bringing much-needed transparency to higher education. AdmitSee is a social media platform where college and grad students upload their application materials and provide advice to applicants.

Lydia is originally from Stonington, a small seaport town on the Connecticut – Rhode Island border. She attended Johns Hopkins University, during which time she worked with several college admissions consulting and test prep companies. After college, she spent four years working in the entertainment industry, optioning book rights to be developed into films.

She is a graduate of the University of Pennsylvania Law School, where she received her J.D. along with a Certificate in Management from Wharton.

Where did the idea for AdmitSee.com come from?

When I was applying to grad school, I spent many hours trying to find examples of application essays about working in the entertainment industry. I couldn’t find anything on point or verified. The anonymous forums were addictive and destructive – lots of scared applicants trying to knock down their competition. I remember one especially discouraging forum called “What are my chances…” Multiple commenters tore apart my academic resume. I ended up applying to an excessive number of schools out of fear.

At UPenn I connected with a classmate, Stephanie Shyu, who had a similar experience. Even her pre-law advisor had provided her with bad information about which schools she should apply to and where she’d get in. We lamented the state of college and grad school application resources… how the market is fragmented/outdated and favors those who can spend thousands on private admissions consultants. I proposed the idea of creating a comprehensive repository of past application files and replacing anonymous forums. Stephanie expanded on this – realizing the importance of data and the potential value for international applicants. We teamed up with developers who had previously built dating sites, and thus could quickly execute on our concept. And so, AdmitSee was born!

I try to catch up on emails early in the day. The afternoon is spent collaborating with the team and taking meetings. I try to sneak away to the gym before dinner, where I read TechCrunch and VentureBeat on the elliptical machine. Evenings are spent queuing Tweets, newsletters, and other writing (e.g. answering a Q&A, writing a WSJ post). There are usually some late night exchanges on iMessage with our Founding Engineer, Jerry; I like to be very involved in UX and we tend to be most creative between midnight and 3AM.

I surround myself with people who are more capable than I am.

Crowdsourcing data. Giving people the ability to monetize their personal data / intellectual property. Also, making this data affordable so it benefits the masses.

I listen to users and try to solve their problems. I’m very involved in our high school and college internship programs, plus I review customer surveys and respond to popup form inquiries. Before we built AdmitSee, we surveyed hundreds of high school and college students, asking them what was most frustrating about applying to college and what they’d do differently. I think a lot of entrepreneurs waste time building features that their customers don’t want. Hubris is incredibly unproductive.

My first job after college was working as an assistant to a TV Talent Agent. I was basically the Lloyd character from Entourage. The worst part was the pranks – for example, some co-workers emailed “I quit” to my boss from my computer (it led to a horrifyingly awkward conversation). But I’m grateful for my years of experience in the entertainment industry. I learned to network with executives, juggle many tasks, be assertive, manage expectations… and to password protect all of my accounts!

I would mobile optimize our site sooner. It’s embarrassing how long we waited.

Talk and listen to advisors. I recently heard Paul Graham speak at Imagine K12 about how counterintuitive running a company is – he compared it to learning to ski. You can’t really learn how to do it from a book; it takes time on the mountain and it helps if you have a guide. In the past year we’ve teamed up with some incredible advisors, including Michael Baum, Tim Brady, and Geoff Ralston. We meet with them over and over again to go over new features and plans.

Utilizing social media and campus reps. We have hundreds of paid interns recruiting new users, building email lists, writing blog posts, and contributing to our social media accounts. We have a strong following of 10,000+ Twitter followers, and more than twice that on Facebook. Last month alone, we got around 100,000 visitors through social media.

To reduce upfront costs, our early employment contracts were convoluted arrangements involving profit splits and equity. Untangling these agreements was costly. The lesson is: keep agreements simple and don’t give equity away to people who aren’t full-time.

I wish there was an easy way for entrepreneurs to exchange small amounts of equity in each other’s companies. Hypothetically, I would contribute a percent of AdmitSee stock to and LLC with four other startups. The companies in this StartupPool are incentivized to share resources (e.g. mentions to press, investor contacts, client lists). And, it diversifies the founders’ risk – I imagine there are plenty of founders from Y-Combinator who wish they had an arrangement like this with their classmates Airbnb, Reddit, etc. I hope someone reads this and creates StartupPool.

I’m a competitive sailor – I started racing Optimists at age 8, and grew into Lasers, 420s, J24s, etc. I love the visceral feeling of being on the starting line, especially in a one-design dinghy fleet. I’ve never experienced anything as physically and mentally exhausting as small boat sailing… except, perhaps running a company!

Google Drive to collaborate on documents and stay organized. MailChimp for email lists, automated emails and newsletters. Kissmetrics to see how users are interacting with the site. Asana for tracking tasks and ideas.

Everyone recommends startup manuals, so I’m going be different and suggest Stuart Diamond’s “Getting More.” Read it and you will become a better communicator and negotiator.