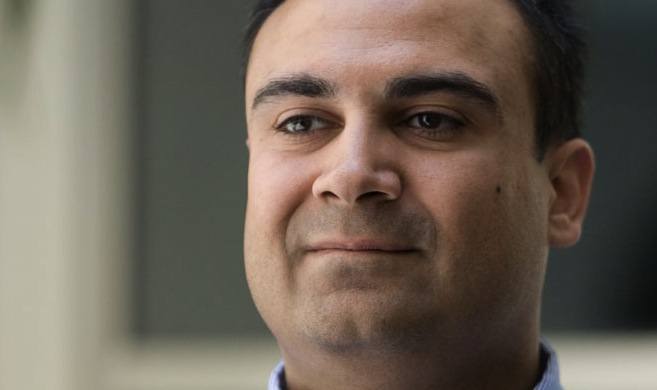 [quote style=”boxed”]Impact inspires me. I search for ideas, technologies and people that can have an impact; that can leave a mark on the world with what they create; that can create a marginal (at least, although sometimes even more) advancement in the state of technology and as a result in our lives.[/quote]

Manu is the Founder and Chief Firestarter at K9 Ventures – a seed stage micro-VC fund that provides funding and support for tech startups in the San Francisco Bay Area. He previously founded, grew, and sold two successful startups. He was the Founder, President and CEO of SneakerLabs, a company which developed software and services for web-based customer interaction. After the successful acquisition of SneakerLabs (March 2000), Manu served as the Vice-President of Interactive Technologies for E.piphany. He then served as the Chairman and CEO of iMeet, a provider of web-conferencing services. After the merger of iMeet with Boston-based Netspoke (August 2002), Manu served on the Board of Directors of Netspoke until its acquisition by Premiere Global Services (August 2005).  He holds a Bachelors in Electrical and Computer Engineering with University Honors and a Masters in Software Engineering from Carnegie Mellon University; and a Ph.D. in Computer Science with a Distinction in Teaching from Stanford University. Manu has invested in several technology startups including Lytro, CrowdFlower, Twilio, DNAnexus, CardMunch (acquired by LinkedIn), Zimride, BackType (acquired by Twitter), IndexTank and others.

I am working on establishing K9 Ventures as the premier technology focused micro-VC fund.

These days I spend most of my time with current portfolio companies in advising them on different aspects of their business ranging from product design and development, business models, partnerships, business development, recruiting, and M&A transactions. In addition, I am always on the look out for strong technical founders that are building core new technology products or opening up radically new markets. A typical day for me varies greatly from doing 5-8 back to back meetings on a “meeting day” to spending time on doing reading and research in interesting areas, building out the network and establishing connections for portfolio companies, and of course, responding to email.

1) Amazon Web Services: Generically you could call it cloud

infrastructure, but AWS clearly is the leader here by far. What Amazon has done is a game changer when it comes to infrastructure cost and capital expenditure. It’s a fundamental shift in how startups are being built now and in the future.


2) A Billion Users: The Internet has grown up. It now has over a

billion users and is ubiquitous — from our offices, to our homes, to airplanes, and in the palms of our hands. It’s a phenomenal shift in how we communicate, how we get information, and how we live.


3) The iPad: This to me is another fundamental shift. For the first time, you can imagine a computing device that is radically different in its form factor and the way it is used. Steve Jobs is correct when he refers to it as Post-PC, because the PC is about to be posthumous for most every day (especially non-development) tasks. The iPad requires new interaction techniques and creates a different form of engagement with users.

By bringing teams around them. Ideas are like seeds. Without them nothing starts. But an idea without the right team to execute on it, isn’t going to go anywhere. In short, ideas are brought to life by the people who adopt them and care and nurture them. For a more detail view on my thoughts on ideas, please see

Impact inspires me. I search for ideas, technologies and people that can have an impact; that can leave a mark on the world with what they create; that can create a marginal (at least, although sometimes even more) advancement in the state of technology and as a result in our lives.

I’ve been really fortunate to not have made mistakes that have lead to a major disaster or fatal flaw. So far, even when things go wrong, they always have a tendency to work out for the better (or I’ve just become really good at making lemonade!). However, there have certainly been decisions that I’ve made along the way that in hindsight I would do differently and one of those decision was the choice of geography. I started my companies in Pittsburgh, Pennsylvania. Although both my companies worked out spectacularly well, I’ve often wondered how much different it would have been had I moved to the San Francisco Bay area right when I started. What I’ve learned from that is to encourage young entrepreneurs to move out to the Bay Area sooner and build their companies here.

Accounting. Yes, really, I’m talking about one of the most boring elements of running a business — keeping track of and recording finances. The systems we use for doing this are so archaic. I started using QuickBooks in 1996 when I started my first company. Till today, it looks and works almost the same. I would love to see someone do a radically different take on this space. The companies that dominate this space haven’t really innovated much. Things have changed a lot but we still do accounting the same way. I’d love to chat with anyone who wants to take on this challenge (and it’s a big challenge because going up against the incumbents in this space is not easy).

Twitter. I don’t rely on any single source of reading any more. Instead, I follow people who I respect and use them as a filter for the things I should know. Before Twitter I used to read via Google Reader, but used the same approach there, by adding feeds from interesting people and sources. Twitter gives me more granularity than RSS did and provides a social volume control on what is important and what is not.

I’m going to pick Outrageous Optimism by Jack Roseman and Steve Czetli. It’s a book that not a lot of people have come across, but it is one that provides some real wisdom for entrepreneurs in bite-sized chunks (which probably works well for the attention span most entrepreneurs have!) Jack Roseman has been a personal friend and mentor for many years. I’ve learnt a lot from him and a lot of what I have learnt from Jack in person is now in the stories he tells in this book. I often give out copies of this book to budding entrepreneurs and inside the book is a sticker which says: “By accepting this book you agree to: 1) Read it, and, 2) Pass it on to another worthy entrepreneur.”

By far the iPhone. Cannot imagine being without it 🙂 (Thank you Steve Jobs)

Ren Ng – the founder and CEO of Lytro. Ren’s brilliant.

Why did you decide to start a venture fund as opposed to doing another startup?

1) I love working with smart people. Entrepreneurs are some of the smartest people I have ever met. They have the will, the ability and the desire to change the world.

2) I love working on new and interesting technology. While there is a lot of cool technology in academia, it doesn’t always see the light of day. In startups that doesn’t happen. In a startup it’s your job to help spread the technology as far as possible.

3) I love figuring out new business models. How to take something and make it sustainable. To get it to that point of critical mass, that then gets the chain reaction going.

4) I love learning. I could go back to being a student anytime. In fact I miss it. But as an investor working with startups, I’m forced to stay on the ball and learn as quickly as possible, often, just-in-time.

5) I love teaching. It’s why I went back for a PhD because I almost considered a career in academia. What I realized is that I love teaching about startups and all the different aspects of founding, running and building a startup into a real company. As an investor, I get to do all five of these almost every day. That’s why I know that I’m going to be doing this for at least the next 30 years (or longer!).