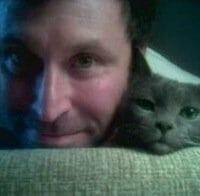 Mark Moll is an experienced Creative Director and Copywriter with over 15 years in the industry. He’s worked at some of the countries most highly regarded advertising agencies including, Arnold, Mullen, Deutsch, and most recently at Crispin, Porter & Bogusky. His client experience is a collection of top companies – Domino’s, Coke Zero, Volkswagen, Monster, Saturn, Converse, Subway, Atari, Vail, Oxygen Network, Jiffy Lube and United HealthCare. His work with these companies has garnered him several major awards and industry accolades. One of his recent campaigns, Pizza Turnaround for Domino’s, has brought wide-spread acclaim and was named one of the top campaigns of 2010 by Creativity/Ad Age. Mark also devotes his time and advertising skills to many pro-bono animal advocacy projects. He currently lives in Boulder, Colorado with his wife and three cats.

“It’s okay to be a cat guy” came about from my own personal experience. I’m 6’4″ and consider myself a guy’s guy. I like sports, gambling, beer, and any other guy activites. The problem is that a guy like me shouldn’t really have a cat. Or, at least, that’s what society says. They say that a guy who has a cat is somehow soft or weak. And that’s bullshit. I started this to show that there are men out here that like cats. That don’t believe man’s best friend is a dog. I also started “It’s okay to be a cat guy” to use a little humor and raise awareness for Much Love Animal Rescue in LA and La Animal Services about their cat adoptions. In February we had a Cat Guy Week and helped adopt over 120 cats. People have really responded to this and our Facebook page now has close to 3700 fans. Not bad for 3 weeks.

I’m freelancing at ad agencies and look for my next great job. And I’m working on extending “It’s okay to be cat guy” into a movement of fun cat guy related things and I’m also hoping to harness the power of the group to do good for cats.

What are three trends that excite you?

Everything excites me these days. People solving problems in smart ways with technology. People using the power of social media and change to disturb the old ways of doing business. Alex Bogusky’s Fearless Revolution and the new Common Brand. Along with Victor and Spoils the ad agency built on crowdsourcing. And anything that is talked about on the TED stage.

I love to find something interesting that involves people rather than talking at them. If you appeal to their likes you can tell them anything. Whether you’re a brand or just an individual. To me the big idea is coming back. but it has to be big enough and smart enough to engage people, not just get them to buy something. Tide – Loads of Hope is a great example.

People and companies that are open to hearing new ideas. There are thousands and thousands of companies out there that say they want to do something cool or breakthrough, but can’t figure out how to do that. It takes hard work and the strength and confidence to know you’re right, even if no one else agrees. Follow your gut and it will always point you in the right direction.

Not working at Crispin Porter Bogusky when I had the chance back in 1999. My career took me to several other agencies where I learned that if you work hard and believe in your ideas it doesn’t matter where your work. Although I finally worked at CPB in 2009. Best experience in advertising ever.

What is one idea that you’re willing to give away?

Sorry can’t do that. Our ideas are all we have. I guess people out there will just have to come up with their own.

What is one book that you recommend we read, and what is one tool that helps you bring ideas to life?

Made to Stick. Outliers. And anything in Fast Company. All are very insightful about life and business.

Firefox. The internet is all you need.

I’d love if you interviewed Mario. The guy would started IdeaMensch. Would love to know why he started it and what he has learned from it. (Awesome answer – here is a link to Mario Schulzke’s interview)

How many cats would you want to have right now?

Can we see one of these videos?

It’s okay to be a cat guy on Facebook: Facebook.com/itsokaytobeacatguy
markmollwriter.com
Mark Moll on LinkedIn