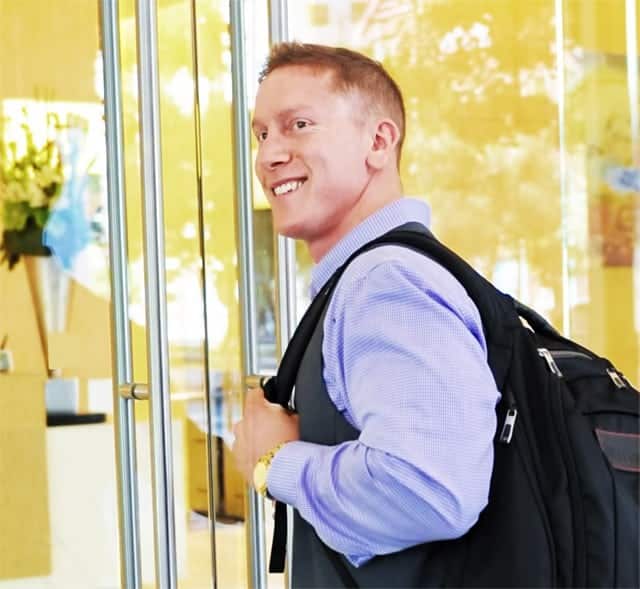 Close deals. Concentrate on closing deals – lots of them. Put the irons in the fire as they say and repeat. I may say that as I’m more “sales” in my approach to business however it’s key to success.

Mark Samuel is the epitome of a true entrepreneur. He is the founder and CEO of a successful fitness bag company – Fitmark.

Mark is a serial entrepreneur with a great track record. He founded his first company at age 23. The company had annual revenues of $10M within 2 years. Now, years later, he’s onto his ninth and biggest venture with Fitmark.

Fitmark bags are now being sold in 25+ countries and have raised $1M in funding to date. The bags are used and loved by some of the most successful athletes all over the world: Flex Lewis, Mr. Olympia; Camille Leblanc-Bazinet, winner of the 2014 Reebok CrossFit Games and also named the fittest woman on earth; Jim Miller, UFC Lightwight Contender; among others.

Mark is passionate about growing his business and teaching other entrepreneurs how to build successful companies.

Where did the idea for Fitmark come from?

I’ve been a fitness enthusiast most of my life so being in and around the gym and seeing voids in the fitness market were, and still are, often pretty clear to me. One thing I noticed was that bags being marketed to fitness enthusiasts weren’t super exciting, at least in my opinion. My mission with Fitmark is to fill that void.

My days have always looked the same. I’m an early riser who likes to get as much done through the day as possible. That means I’m up early, I kiss my wife and my son, I drink a protein shake and coffee, I check emails, I hop on calls, I hit the gym, and then off to the office. I work with intensity through the day, grab some healthy meals in between and then get home to be with my family in the early evening. At night, I stay (healthfully) responsive via phone and email until bed, as I’m a true proponent of looking for deals and closing deals, all day, every day. As for making it productive, the answer is simple: Never go to bed without feeling like you accomplished something. If you did, you weren’t productive.

You have to be a doer. I don’t hesitate on my ideas, even if they end up being bad ones. I like to simply push the envelope on every aspect of business. I go hard at everything I do so that I bring ideas to life all the time. My motto: Just do it. (I’m sure you’ve heard that before)

The social trend is exciting – really exciting. I’m a fan of all things social and can’t wait to see where it takes us, and how much more it can help our brand. I’ll push that envelope every single day and hopefully look back a few years from now and thank g-d I did.

It may not be a habit as much as it is a personal makeup in my DNA: I’m pretty neurotic. I can’t leave projects undone. I can’t leave deals open that aren’t closed. And, in general, when I have my heart set on something, I usually find a way to get it done. I guess all of that makes me pretty productive. Sometimes I find it hard to turn off. I’m working on that.

I was an arborist for a full day when I was 18. I probably can’t be called a true arborist however, I was definitely in the woods. I was helping to arrange for fire wood. And, I got the worse poison oak in my life. Enough said. I will never do that again.

Planning and scheduling is something I need to work on a bit. If there was one thing I would do better it’s that, and I would have done that from the start. As I grow the company, I’m getting better at it, because you need to, however it would have been much easier from day 1.

Close deals. Concentrate on closing deals – lots of them. Put the irons in the fire as they say and repeat. I may say that as I’m more “sales” in my approach to business however it’s key to success.

We are a social company and we love it. With the likes of Facebook and Instagram we not only can advertise and communicate with our customers but we create community and engage with them as well. That’s a big deal for us, as we love to demonstrate our personality. We love to showcase the perfect “customer experience” that we talk about so much and it’s so reflective of our brand. It’s pushing the envelope through social channels that allows us to do that and grow. We plan heavily around our social initiatives and we’ll continue to month over month.

I was in real estate finance in 2003 and also in 2008. What a difference those years make. Although, I did OK in 2008 and was able to sustain the decline and turn some decent years, I would have planned those downturns better. Not recognizing the financial ups and downs of the economy and how it can affect your business is a failure in it of itself. I’ve learned from those mistakes.

I could give you 20. There may even be a few I’ll execute on at some point in the future. For now, here’s one: an app, similar to Uber, except they deliver coffee. If you’re willing to pay $2+ walk to your favorite coffee shop, would you pay $3+ to have it delivered to you? We all know the up-sell opportunities there. Food. Hot food. So, you’re upstairs at your office, you want coffee and a hot breakfast sandwich, use the app and they’ll deliver (meet you downstairs, of course). No more need to walk to the corner and even better yet, pick up a few rounds for others in your office. That average bill went form $3 to $25? We all know the margin on coffee and we all know the success of Starbucks and the like, and that’s brick and mortar. Expensive. So, set territory in metro areas and test it. Have a driver (with full coffee bar/breakfast stand) in every three-block radius. Launch. Test. Who knows?

I have a picture of my wife and son on my desk. I don’t go through the day without looking at them at least a few times. It grounds me. It reminds me why I do this.

A couple off the top of my head, even though I leave the fun tech stuff to others: we use Woobox to help run some of our online contests. I’m a fan of some aspects but some of their recent changes like the layout within Facebook isn’t my favorite. We use Adroll for some retargeting efforts. Pretty easy to run, easy to understand. Can we truly identify all sales generated from it? No.

“The E-Myth” by Michael Gerber. Why? If you’re an entrepreneur it will absolutely talk to you within the 1st few pages. It puts things into perspective in a simple and easy to understand manner. Get it, read it. You’ll appreciate most of what’s written.

I don’t really follow blogs or Twitter on a personal level. I do, however, follow great leaders day to day online, and read their stories, whether it’s books they’ve written or books about them. You can’t go wrong with following the successes of Steve Jobs, Mark Zuckerberg, Richard Branson and Howard Schultz. Their innovation and leadership styles, some good, some bad but the theme all remain the same: true innovators, big thinkers. I’ve also been following Gary Vaynerchuk. The guy is simply awesome.