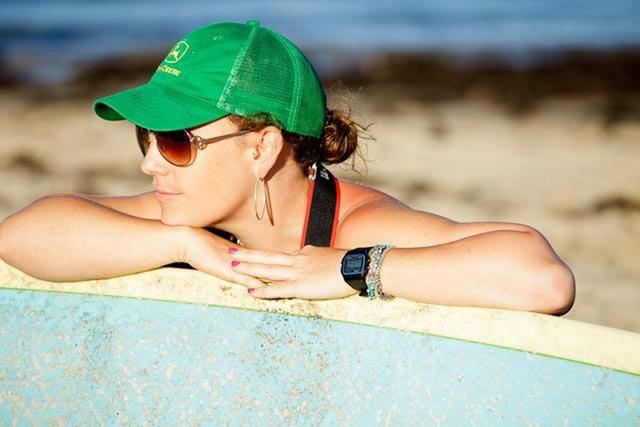 [quote style=”boxed”]Take time out to put things into perspective and laugh a little. I cannot overemphasize the importance of laughter and a sense of humor in all things stressful.[/quote]

Mary Kay Holmes has spent her entire life admiring handsome men. From a young age her walls and Trapper Keepers were decorated with clipped magazine pages and Herb Ritts postcards. You may think this is something most women grow out of, but if you spend a few minutes with Mary Kay, you will realize that she incorporates imagery into everything she does–from her iPhone case to the stack of Clooney tear sheets next to her laptop. After years of working in the film, television, and photography world the creation of the Daily Hot Guy iPhone app was a natural progression, and has proven to be a perfect project for this photography lover.

I am currently working on an update for the app that will invite users to actively participate in the creation of imagery. I am also brainstorming options to bring Daily Hot Guy to a television screen near you. One thing I am rarely short of is ideas for delivering gorgeous men into the lives of our users–if only there were 48 hours in a day!

Where did the idea for Daily Hot Guy come from?

For years I have loved magazines like Details, Rolling Stone and GQ for their lovely photographs of men, yet wished there were more in each issue. Men have Playboy, Maxim, Sports Illustrated Swimsuit Edition, while women have to flip through an entire People magazine hoping for one or two sexy images of Joe Manganiello. I realized sometimes you just need a photo of a hot guy to email to a girlfriend or post on Facebook, so I created the Daily Hot Guy iPhone app.

First off, I sit at my computer and edit about a billion photos of dudes. We work with several photographers, so there are always images to look through and choose for the app. Then there are shoot days to produce, models to cast, and emails to answer. Since I have two children, I spend a couple hours a day with my laptop at hip hop or swim team–yes, I am the mom who appears to be gawking at shirtless men when I should be watching the kids dance. It’s my job, I promise!

How did you bring ideas to life?

For the DHG app I approached my husband, who also happens to be a brilliant web developer/producer and asked him to help me with the tech side of things. I also pitched a talented photographer friend to shoot images for me, and another creative genius to design the branding. One thing I am very fortunate for is that I am surrounded by artists who love to collaborate on fun projects. Without them, Daily Hot Guy would be nowhere near as awesome.

What’s the one trend that really excites you?

I’m loving that strong, sexually confident women are becoming more mainstream. It’s been a “Boys will be Boys” world long enough, and I’m ready to see women with Daily Hot Guy on their iPhones right next to P90x and CNN.

What’s the worst job you ever had and what did you learn from it?

Worst job? It’s hard to say, since most jobs I have had lead me to where I am now. That said, I really disliked the pizza place I worked at when I was 15–the manager grabbed my butt one night while I was at the register and later told me not to say anything. I immediately reported him, then found a new job. No one needs to work under those conditions–NO ONE.

The problem with looking backward is that you have no way of knowing if all the things you did the hard way made it possible for the advances you have made. Maybe I’d go back and change the way we shot the first time, or how the images were organized, but it was those hurdles that helped me figure out how we do things today. Although now that I know our users more, I would probably have cast more men who look like Channing Tatum!

Take time out to put things into perspective and laugh a little. I cannot overemphasize the importance of laughter and a sense of humor in all things stressful. Sometimes we all just need to watch an episode of Between Two Ferns and eat some kale chips.

Not long after the app launched I got a call from a huge publication asking to interview me and use me as one of their “app experts” for future stories. I was beyond thrilled and chatted with the interviewer on the phone for about 30 minutes. Feeling great about the possibilities, I returned to my day and soon had an email from her asking me if she could bill the app as one of the top 5 apps in iTunes or one of the top selling apps of all time, and since we hadn’t been out very long, I could not. I told her we aspired to these goals but had not quite reached them yet, then offered other ways she could represent the app. Because of this, I was dropped from the article. Later someone told me I should have lied, but it’s just not how I roll. I was disappointed, but I know I made the right decision.

What is one business idea that you are willing to give away to our readers?

Oh man, I have a million of them! The one I was just talking about with someone was an organization that would drive around to restaurants at the end of the night and pick up all the hot food they didn’t use that day that will end up in the trash (i.e. undelivered pizzas, pre made salads, Whole Foods hot bar items) and drive it to a local shelter for homeless women and children. I spent years working in restaurants and watching uneaten food go into dumpsters at the end of the night, while people slept in the street and starved 10 feet away from the door. We would sneak food out when we could, but most places have policy against giving the food away.

The fear and hatred people carry around for other groups of people. There is so much pain and horror in the world caused by people who blindly harm. Wars, terrorism, crimes against women, bullying, gay bashing…I could go on and on. If people want to worship something or love someone, and they aren’t hurting anyone in the process, just leave them alone and worry about yourself. I understand this is a very simplistic and naive statement, but if we are dreaming big, let’s do it. Fear is difficult to calm, this is why we put violent dogs to sleep–no one wants to be the one to try break them. We can’t give up on this one, though; it is at the root of so much evil.

George Clooney and I were secretly married several years ago in Vegas, and have kept our relationship classified because we didn’t want to totally bum out every woman on earth. Sorry, ladies!

My Amend CMS, which is the content management system I use for both the app and the website
Chartbeat keeps me up to date on my website activity
MailChimp allows me to quickly and easily email my subscribers

The Giving Tree by Shel Silverstein. Need a dose of perspective and maybe a good cry? It’s the perfect book.

@robdelaney because he says funny stuff
@richroll because he is an inspirational vegan ultra athlete who takes great Instagram photos
@JoeManganiello because he posts hot photos of himself. Being hot. Yep.

I was working out and listening to This American Life (which I love), and Mike Birbiglia was talking about the sleepwalking incidents that inspired his feature film “Sleepwalk with Me.” I actually had to stop and laugh out loud while people stared at me in the park. I have listened to the same podcast 3 times since then. Brilliant.

Who is my hero?

Tina Fey. Amazingly talented, fraggin’ hilarious, and a crazy multitasking mamma. I aspire to be half as awesome as she is in one of her cute little toes.

What would you say to people who think women shouldn’t have apps like Daily Hot Guy on their phones?

If you are comfortable and confident in your life and relationships, having a look at a foxy image shouldn’t affect anything. Admiring an attractive person is something we all do naturally, and there is no reason it should be any more scandalous when a woman does it. I look at photos of men all day long and have a fantastic relationship with my husband–just because I think Matt Bomer is hot, it doesn’t mean I’m not committed.

What is your favorite guilty pleasure movie?

There are a few movies I will always watch if I happen to catch them–Top Gun, Dirty Dancing, and Moulin Rouge. My husband and I just caught Dirty Dancing on TV last week and it made me super duper happy.