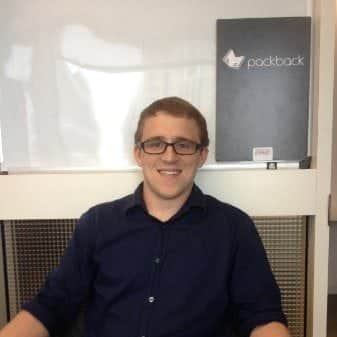 Mike Shannon is co-founder and handles business development for Packback, an education technology startup. Packback provides a solution to both students and educational content providers to transition into the digital education landscape.

Where did the idea for Packback come from?

As students, my co-founders and I had a ton of involvement on campus and realized that the one problem that all students were experiencing revolved around the textbook purchasing cycle. I personally had many experiences of buying a collection of used books at the start of the semester only to realize that half of them were rarely used. This is a painful reality that many students endure.

To save money on books, you try to buy used textbooks. However, the supply in the used market dries up quickly, so a student must make a decision before actually knowing how often textbooks will be used.

On the flipside, we did some research and found that “learning companies” (aka publishers) lose more than $5.5 billion of a $8.2 billion higher education textbook market, while the used book market has stalled the adoption of digital resources in higher education.

We decided there was an opportunity to create a two-sided market solution by partnering with major learning companies and providing students with an affordable alternative to the used book market in which they can pay per use in 24-hour increments.

If a student realizes a professor is using a book on a regular basis, he or she can convert the money spent on daily rentals to the extended semester-long rental. Students save hundreds, we introduce a new revenue stream to learning companies, and at the end of the day, we’re expediting the digital adoption rate in higher education.

I like to wake up between 5 and 5:30 a.m. and go for a run. I’d say the run goes a long way in setting the tone for the day and clearing my mind. From there, I typically have a few meetings lined up throughout the day, along with answering a slew of emails and phone calls and keeping abreast of the latest news in education technology. I also typically spend about an hour on the phone speaking with Packback’s student ambassadors, which is definitely a highlight of my day.

I think that’s actually an entertaining misconception about entrepreneurship. People tend to think that entrepreneurs sit around until they have an “aha!” moment that gives them a great idea. That wasn’t my experience, and I’ve heard over and over again from Packback’s world-class investors that ideas are a dime a dozen. It’s all about execution.

Through disciplined execution, you make simple observations that turn into solutions, such as Packback’s pay-per-use value offering. We were just hard-working students who noticed an obvious problem and decided to dedicate ourselves to developing a solution. Any evolution in Packback’s offering has come from the same disciplined approach. Gathering a group together over a whiteboard is a great forum to share observations, but those observations come from hard work.

I’m particularly excited by the digitization of education, particularly at the higher education level. We’re in the midst of landscape-altering technological developments, such as the adaptive learning technologies being developed by companies such as McGraw-Hill Education, Cengage Learning, and Pearson.

These efficacy-improving technologies, combined with the availability of high-quality content on sites such as TED Talks and Khan Academy, make for an exciting digital higher education landscape.

With Packback, we’re playing a crucial role in bringing both sides — students and learning companies — together in a manner that’s healthy for the industry. It’s fun to be a part of.

I found early on that it’s easy to become very scattered and disorganized with so much going on in a startup. One habit I’ve developed recently is to look over my calendar the night before and fill in open time with a minute-by-minute schedule of tasks that I prioritize using a system called Trello (thanks to Packback’s head of engineering, Steven Maguire).

This allows me to sleep a little easier knowing that my tasks are actually scheduled out and I know when I’ll be executing them. This helps because I spend a lot of my time in meetings and on calls, particularly on the business development side of things.

There’s truly no such thing as a bad job. If you have a job, there’s something to be learned from it and an opportunity to be gained. In high school, I worked at a steel drum plant between football practices. It would be 100+ degrees in the plant, and I had to wear long pants and long shirts. That was pretty rough, but the experience was invaluable because it made every job I had after that a piece of cake.

I probably would have majored in computer science, which would have made things a bit easier in getting our initial minimum viable product off the ground. I’m a strong advocate of adding computer science courses to the core curriculum in high school, if not grade school. Technical aptitude is the new literacy, so I would have focused a bit more on that.

My advice to college student is to look at what skillset a classroom setting would provide the most value in helping them learn. Most of the lasting “business education” I gained happened outside the classroom by reading tons of books and gaining real working experience.

Show up early, and leave late. Eventually, any weaknesses can be worked on and improved, but the discipline to keep focused and work hard day after day, through thick and thin, is the only way to thrive in this startup game. It’s takes a whole lot of persistence.

We took an approach of partnering closely with textbook publishers and educational learning companies. When starting a business, you have to look at the dynamics of the market you’re entering and find your niche.

There are plenty of used book providers out there that have actually been detrimental to the industry. We decided that there was an opportunity in being the publisher-focused student affordability option, and that’s how we’ve positioned ourselves.

I wouldn’t say that there was one major failure. It’s a combination of trial and error in each one of our methods, which is ultimately how we refine the company strategy and operations. I’ve been fortunate enough to be surrounded by one of the smartest, hardest-working teams in Chicago, so I have a great safety net to quickly correct any errors.

If there were a service in which people could use their own cars to drive people around on demand at affordable prices through the use of a convenient app, it would be a hit. I’m thinking there’s room for two major players.

I actually spent six years as a ball boy for the Chicago Bulls. As a kid, I always knew that I would make it to the NBA. Sure, I initially planned for it to be as a player, but this was a close second!

I recently started using RelateIQ, which helps me keep track of a wide range of relationships in a more dynamic manner than a typical CRM. It’s been helpful. Our entire team tends to share a lot of Google Docs, as well.

There are a lot of great business books, including “Good to Great”  by Jim Collins and “The 7 Habits of Highly Effective People” by Stephen Covey. However, as a student, I think I got the best return by reading biographies and autobiographies of other successful businesspeople.

Walter Isaacson’s “Steve Jobs” and Sam Walton’s autobiography, “Made in America,” are two of my favorites. Mark Cuban also offers some great down-to-earth advice in “How to Win at the Sport of Business.”

Ultimately, my takeaways from reading these types of books were that each individual did two things: 1. They weren’t afraid to challenge the status quo, no matter how crazy the conventional thinkers thought he was. 2. They worked extremely hard to win.

In addition to reading great books about inspiring individuals, the best influence is always in person. From a personal standpoint, it starts with having great parents. On the business side, I’ve been incredibly fortunate to be surrounded by a group of supporters who have helped guide us in Packback — people like Howard Tullman, Mark Achler, Mark Cuban, and Rishi Shah have all had a major impact on me.