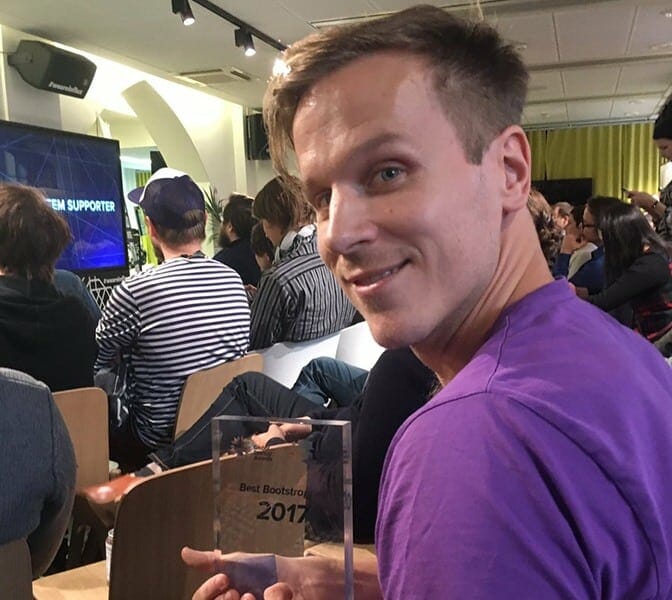 We believe that the best way to try out if an idea is good enough to take off is to speak to 100 unaffiliated potential customers as soon as possible.

Before launching Vainu, Mikko Honkanen was a multi-national director for global media monitoring company Meltwater. He gained experience across the Nordics as an area director and country director for Finland and grew the company and a team in Silicon Valley as regional director for the North America West division.

Through his experience working in the media landscape and with Big Data, Honkanen realized a need for a broader B2B service that allowed business development professionals from many different industries the kinds of targeted insights and triggers they need to make smart, efficient prospecting decisions. Alongside longtime friends and fellow tech entrepreneurs Tuomas Rasila and Pietari Suvanto, Honkanen started along the path of creating Vainu. They began immediately bootstrapping in 2014, developing a pitch for their SaaS product Vainu, a data-driven lead and prospecting platform.

The name Vainu came during a brainstorm between Honkanen and now-CEO Suvanto. The term is Finnish and roughly translates to “scent on the hunt.” The name Vainu captured the impact the product would have on sales people — offering them insights as sharp as a dog’s nose that let them know when to approach prospects — the best times and places to be “on the hunt” for new business.

As a co-founder of Vainu, Honkanen wears many hats. He is based in New York City and functions as director of the U.S. office, launched in 2017. He manages a sales team and oversees major marketing initiatives for the company. He also works on customer support and provides additional sales guidance to teams in the U.S. and in Europe.

Honkanen holds a master’s degree from the Helsinki School of Economics and has additional certifications from the Stanford University in business administration and management, as well as extensive training in financial strategy from the University of Oxford’s Said Business School.

Where did the idea for Vainu come from?

All of us founders had spent many years in the technology sector in sales running sales teams and account management organizations. Again and again, we were facing the same challenge: What are the most optimal prospects we should go after? How should we allocate our time between different prospects and customers? For example, in the US there are more than 40 million companies and knowing which companies are the most ideal prospects for my products and services would add a lot of value to any company. We tried to find a good solution for that but could not find any. So we decided to build it ourselves.

When I’m in our New York office, I want to be as close to the customers as possible. On a typical day, I have 3 to 5 meetings with both potential and existing customers. Recruitment is also vital for any growth company and I try to make sure I allocate 10 to 20% of my time on finding new talent.

When I’m in Europe, I use the opportunity to work closely with our product development team in order to make sure we channel all the feedback from sales and customer success teams to our development team. And because our team is growing so fast (we currently have 130 people), it’s also critical to keep improving all the processes and workflows in order to make sure we maintain the effective and lean DNA of the company.

In order to stay productive I have a couple of rules of thumb. Firstly, I really focus on getting one thing done before jumping into anything else. And second, whatever tasks I have on my to-do list, I always try to make sure they have an impact on at least one of the following: Our product, our sales and marketing process, our customer experience, or our team / culture. If the task does not really touch any of the following, it’s most likely not that much of a priority after all.

It’s a mindset. I believe it’s much better to get real unfiltered feedback from other people. If it’s a product-related idea, we want to develop some sort of MVP as fast as possible and get it into the hands of real users. I think meeting with 100 potentials customers is by far the most effective format of market research.

There’s been lot of talk about the fact that a buyer has more information about all the vendors available than ever before. But what’s even more exciting I feel, is that the same holds true for salespeople. Many research shows that more than 70% of all the data in the world was created in the past 24 months. And most of that data is now available for salespeople to use. I’m very excited about all the opportunities these new insights provide for modern salespeople.

I have a tendency to measure lots of things and have a very data-driven mindset. It’s just so much easier for me to decide what to do and how to improve certain things when there’s a good amount of relevant data points available to act on.

Recruit people who are passionate and can inspire other people.

Strong focus on sales from Day One. As mentioned before, we believe that the best way to try out if an idea is good enough to take off is to speak to 100 unaffiliated potential customers as soon as possible. If people are willing to spend their time and money on something, it’s the best feedback you can get.

I’ve been following the careers of some people who applied to us in the early days. We decided not to hire them but I think some of those decisions have been big mistakes. These people are completely killing it in other organizations and I think many of them would have been big assets for us as well. It’s actually a good exercise for all recruiting managers to do. We tend to measure the success of our recruitment skills based on how well the people we hire succeed in the company. But I think it’s almost as crucial to also keep an eye on all the candidates that were turned down. I think many of us have missed lots of potential superstar team members in the past.

Many research shows that most people are very willing to give referrals if asked. However, only a small fraction of salespeople actually actively ask for referrals. I think someone will create a unicorn if they can automate that referral asking process in an intuitive, elegant and scalable way for sales organizations.

I bought some great tapas for our team last week in Barcelona (well, it might have actually been bit more than $100!). Every now and then, we ask some high potential employees to fly into one city where we don’t currently have an office. We benchmark with local tech companies and try to pick their brains and get fresh ideas. But I think lot of value is also unlocked when we simply just spend time together in settings that are different than your everyday routines. That Catalan-style tapas dinner was definitely one of those moments. So many good discussions and great memories.

Zapier helps me to connect and integrate many of the apps that I use daily. There are so many useful applications these days and they don’t always have powerful integrations with each other. Zapier is solving that problem. For example, being able to improve our lead scoring models on Hubspot with our own Vainu data saves tons of time. It really helps us spend our energy on leads that have the highest likelihood to convert.

Malcolm Gladwell’s debut book Tipping Point. It’s a fascinating narrative of why and how some ideas, products and messages take off and spread like a virus.

“Technology is eating the world and if you’re not constantly improving your company might very well be on the menu next.”

1. Meeting with potential customers is the best possible market research you can do
2. List your most important goals and always review your daily tasks if they actually have an impact on any of the goals
3. As an entrepreneur, aim for building a culture of “one great team” instead of “one big family”
4. Keep an eye on the development of the people you decided not to hire. You’ll become a better recruiter by doing that systematically
5. There’s a real unicorn opportunity if you are passionate about referrals and have the patience to build an intuitive and scalable SaaS platform for that process