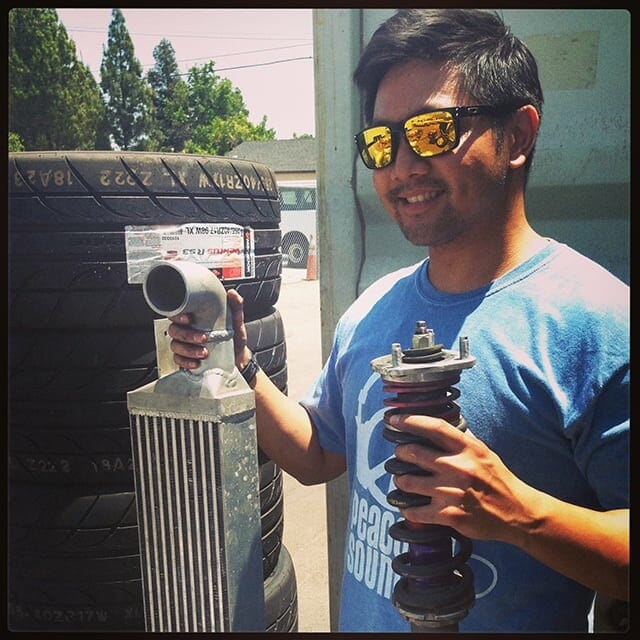 [quote style=”boxed”]”At some point, you’ll just know which advices are good or bad when you listen to your own instinct.”[/quote]

Ray Dipasupil is founder, CEO, and product engineer at StanceTrader, a marketplace for automotive gearheads and hot-rodders to discover OEM [original equipment manufacturer] and aftermarket car parts. He works with David Joey Rodriguez, JC Elamparo, and Allan DeCastro who are also founders of StanceTrader. Ray had always been passionate about automobiles growing up as a kid in the Philippines and wanted to contribute to the automotive community by building a seamless and easy-to-use car parts marketplace that would make a profound fundamental impact.

I work on many things. Engineering, meetings, and marketing. We just launched StanceTrader on May 2013 and we’re incessantly obsessed on improving current features and preparing to build new ones as we go. The design and engineering of the platform has been completed and now we’re working on how to market and spread the word. We also just closed our first partnership with one of the biggest legendary Honda pro tuner in the industry, Tony Fuch’s Racing.

Where did the idea for StanceTrader come from?

Ever since I started buying-and-selling car parts on the internet—forums and other eCommerce marketplaces—I’ve always felt that the experience was cluttered, fussy, and could be done better. I was a freshman in highschool when I first realized how crappy the experience was and thought that someone better qualified than me can solve this problem. I graduated highschool and it’s still the same. Figured, ‘well maybe someone will figure it out while I’m in college’—still the same. I started working and nothing changed. I decided to take it upon myself to finally build StanceTrader with my team.

StanceTrader makes money through transactional sales. Listing is free and it always will be.

My typical day is very asymmetrical. One day could be in platform engineering, the next could be meetings, and marketing. Though for brevity, I read a chapter on one of the many books I’m reading, The Black Swan – The Impact of the Highly Improbable by Nassim Taleb, after waking up. I’m usually up by 7am eat breakfast and proceed to workout. When building a company from the ground-up, exercise is essential to get you through the toughest of days. Not only does it help in the physical obvious, but it’s also mentally satisfying. Exercise is also the best anti-depressant that no drug can substitute. After working out, I will either be coding, be in meetings, and be in deep thought, just thinking. Of course, there are other tasks such as marketing and administrative that I also have to take care.

I first think critically and even question my own ideas, then ask my fellow founders, family, and friends and ask them what they think. After ideation has happened in my head, I jot my ideas down in my notebooks specifically for these ideas and act on them once I believe they are compelling and can be fundamentally impactful.

Can one ever have a worst job if the so-called worst job has led to one to their greatest discoveries in life, to which then maybe it’s not the worst job after all? I actually studied economics and accounting in college and exercised both foci. I thoroughly enjoy economics, but found that the strict linear thinking and approach of accounting wasn’t my cup of tea in the working world. I was a financial analyst at a big company and worked on average of 80 unsatisfying hours. Management was either divorced or separated from their spouses and some of my co-workers and management also had health problems due to extraneous stress. I did not want to end up the same way they had in their life. It’s funny now, but I kept telling myself maybe that was good learning lesson for me. I learned that not all hard things are valuable, though the inverse is very true. All valuable things in life are hard.

Listen to my gut a lot earlier and start a lot sooner in high school. No regrets, however.

Avoid cynics and be an autodidact in any fields of your interest. It starts by reading a lot of books. To quote Nassim Taleb: “Let me insist that erudition is important to me. It signals genuine intellectual curiosity. It accompanies an open mind and the desire to probe the ideas of others. Above all, an erudite can be dissatisfied with his own knowledge, and such dissatisfaction is a wonderful shield against [mediocrity].”

Listening to well-heeled, good-intentioned advices that later turned out to be unfit for me. I overcame it when I just really got sick of listening to people’s advice. At some point, you’ll just know which advices are good or bad when you listen to your own instinct.

Easy. Solve the disorganized allocation of resources and misinformation of both world hunger and education. The world has enough capital, food, and human resources to solve world hunger, but because of the inefficiencies of capital distribution and disorganization of constituents we still seem to be stuck in 2nd gear. Work with people like Sal Khan of Khan Academy who are making huge altruistic strides in education. Take a chance on moonshot social causes like Jessica Jackley, founder of Kiva.

The secret of what is the secret.

YouTube – Lots of free videos to self-teach yourself on almost anything you desire.

Books – If you’ve always been in awe of science but hardly work in the field of science, then pick up a physics book and start reading. If you like mechanical engineering but do not work in the field of mechanical engineering, then pick up a M.E. book and start reading. I’m convinced that people who are happiest in their careers are the ones who never stop learning and don’t rest on their laurels. It also helps if you are in awe by following your instincts. Einstein did say: “Education is what remains after one has forgotten what one has learned in school.”

IdeaMensch – Because the team behind IdeaMensch are a bunch of winners.

“Pragmatic Thinking & Learning” by Andy Hunt. It will get you to think in positive, mind-shifting ways you’ve never thought possible.

@BillGates – Bill Gates built one of the most successful software companies and he could’ve technically retired, but he’s been working diligently on his philanthropic missions to solve problems in education and poverty.

@ElonMusk – Sustainable energy production and sustainable energy consumption, Elon Musk is one of those rare entrepreneurs that think on both sides of the equation. He founded companies such as PayPal, SpaceX, Tesla, and Solar City

@vkhosla – During the early days when we were building the engineering platform for StanceTrader, I encountered much mental strain because I was also simultaneously learning new scripting languages for the platform. I watch many of Vinod Khosla’s YouTube talks regarding failure, life, technological advances, taking chances, and he frames things into perspective very eloquently and kinda funny too. He’s one of Sun Microsystems founders.

I laughed out loud in the most positive way when Joey told me how he closed a meeting with a prominent tuner shop.

My parents Bob and Connie Dipasupil, brother and sister Bryan and Christine, fellow founders Joey, JC, and Allan, close friends Jose Rimon, Marc Nieto, Nam Nguyen, and Jan Hartigan are my heroes. It’s challenging building a company from the ground-up with very limited resources, but what we initially lacked in resources, my family and friends support infinitely and perpetually replaced.

A question of your choice?