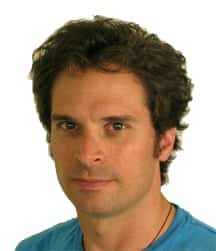 Robert got into advertising by accident. As a cinematographer on music videos, documentaries, low budget features and spots, Robert’s connections at Panavision as well as at post-production facilities were eager to help him develop his commercial reel. As his concepts and storyboards kept getting positive reactions, Robert realized coming up with ideas can often be more satisfying than executing them. From there he explored his options and became a copywriter who thinks visually.

Since then Robert worked at both large and boutique ad agencies, in-house agencies, and on accounts ranging from Lexus to McDonald’s to Southern California Edison. Media neutral, he has created ads for the web, outdoor, print, broadcast, direct, and even on grocery bags. Robert also does ads that don’t look like ads and has come up with concepts for experiential marketing events.

Robert’s interests include sailing and for a few years he taught sailing part-time as a US Sailing-certified small boat instructor at UCLA’s aquatic program at Marina del Rey. Passionate about introducing people to his love for small, fast, wet boats, Robert has helped nearly 100 people learn how to sail catamarans, Lasers and other boats.

I’m writing stories about real people. They’re ads that don’t look like ads and are pretty different than the work I’ve done at most agencies. I got a call from a company that many people find pretty polarizing. Probably as many people love them as hate them. I won’t mention their name because how you may feel about this company is a topic for another conversation. Anyhow, they asked me to come on as a contractor to manage a group of writers as well as write myself. I went in with an open mind and discovered some amazing people who’ve overcome incredible obstacles in order to reach success. I get to speak with these people and tell their stories. Dramatize them really. Place them in actual settings and include all sorts of details and dialog. I make their stories come alive as well as communicate larger themes that resonate with their audience. Apparently no one there has taken the story writing to this level before and they’ve always been pretty one dimensional. But management has been very supportive and the people having their story dramatized are very excited. It’s a great gig for a writer. I also enjoy coaching other writers, explaining why something works better one way or another, and seeing their writing evolve. That’s hugely satisfying.

The other thing I’m doing right now is preparing to move from Los Angeles to Portland in mid-December 2009. There are many reasons for the move, but one of them is my wife is from China and so our son, who’s now 4, is bilingual and we want him to attend Portland’s Mandarin Immersion Program. Also, I’m from the east coast. I grew up in the Washington DC area and have lived in Boston and New York City. And after so many years in LA, I’ve been tree deprived too long. We’re very excited about starting our new home in Portland. And that company wants me to continue to freelance on stories, but on a per project basis.

1) Food. That more and more people want to put healthier, better tasting food in their bodies. Things like Community Supported Agriculture (CSAs) that let people buy produce or meat directly from farmers and ranchers and websites like veggietrader.com that let people who want to swap backyard produce find each other. We’ve been using both of these and have been eating better for it.

2) Value. This relates to the above trend on food where people grow their own food and trade with others or pay more for superior quality ingredients. But there are also examples where people pay less for what’s still a high quality product, service or experience. For example, I got into a cab in Shanghai a few years ago and it was not the usual bare bones VW Santana.  The cab was a Hyundai. The vehicle’s fit and finish blew me away. Great instrumentation, leather seating, wood grain – it wasn’t the entry package. I was working on automotive accounts at the time and often had to test drive a range of luxury marques – from Lexus to Aston Martins. Honestly, I might not have ever got into a Hyundai if not for that cab ride. I’m not at all in the market for a car right now, but if I was I’d put Hyundai on my lists of cars to shop. And they’re also developing a hybrid.

3) Ads that don’t look like ads. Well this relates to the stories I’ve been writing lately. But it can be anything that offers meaningful content or experience beyond the advertising message. I worked on an edutainment piece for Southern California Edison (SCE) where people can go online and create virtual power outages by setting into motion fires, floods, car wrecks as well as earthquakes and other acts of violence. Users see the event happen, the power goes out and they learn what SCE does to prevent outages from happening in the first place, what SCE does when they do, and what people can do to protect themselves. The animation is kind of hokey because they didn’t want to scare people and we had to cut back on some features, but overall we were able to create an experience that lets people play rather than get preached to. Another great example of ads that don’t look like ads is the TrueNorth 100% natural snacks campaign from Strawberry Frog that asked people to submit their own “True North” – their passion. They get many great stories sent to their website every month and a lot of buzz; much more than if they had just done a conventional ad.

I turn over rocks, ask questions and get to know my subject. That includes information directly relating to whatever we’re working on as well as stuff that’s more esoteric, but when combined together generates a new idea. If I had to recommend one book on creativity that gets right to the point it’d be A Technique for Producing Ideas by James Webb Young.

Meeting and learning from people who have different experiences than I do. Also my son. I know it’s a cliche but it’s true. He’s teaching me to see things again as a child, which is the ultimate in witnessing new experiences. He spots what’s amazing and magical in things we now take for granted. Here’s a short video I shot of him before he turned one years old that demonstrates seeing the special in the ordinary. What also inspires me are movies that present unusual characters who undertake unique experiences. Have you seen La Fille sur le Pont (The Girl on the Bridge) directed by Patrice Leconte? Bumming around the south of France, performing a knife throwing routine. Completely out of my day to day life, but completely mesmerizing. Makes you wonder what you might have done had you made other choices.

Tell us something surprising about you.

I played in some notable punk bands from the Washington DC scene, toured all over the country and appeared on several releases on Dischord Records. It was a lot of fun.