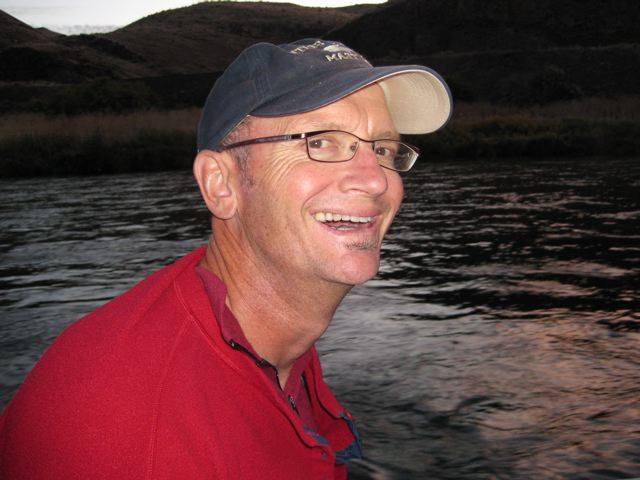 [quote style=”boxed”]…through creativity, design and a good programmer, you can truly change the world.[/quote]

Russ Stoddard got bit with the entrepreneurial bug back in the lemonade stand days, and he hasn’t changed since. He has created five companies and helped start five nonprofits during his career, which spans jobs ranging from a whitewater river guide to a CEO of Internet startups.

Currently Russ is co-founder and CEO of SocialGoodNetwork.com, a startup that uses technology to create and reward the act of doing good in the world. He is also founder and president of Oliver Russell, a Boise-based marketing agency, which is a B Corporation with social responsibility at its core. When he isn’t working, he is supporting, advocating, and volunteering on behalf of causes. He currently sits on the boards of the Treasure Valley Family YMCA and Boise Contemporary Theater, and he has served on the literary arts grants panel for the National Endowment for the Arts.

He is also a published writer and a playwright. His stage play, HEAD, was produced by Alley Repertory Theater last November. He has published poetry and short fiction in a number of literary journals, and his non-fiction writing has appeared in publications ranging from the Philadelphia Inquirer to Outside magazine.

Russ lives in Boise, Idaho. He graduated with honors in creative writing from the University of Puget Sound in Tacoma, Washington, and recently received a Distinguished Alumni Award from the university for his lifetime achievements in community service.

I’m pretty occupied with a technology startup, Social Good Network. We’ve developed a cause shopping website that turns online purchases into donations for nonprofits, as well as a persuasive transactional technology, the Better Donate Button™, that’s a superior technology for fundraisers. We’re also in the early stages of developing an online influence and rating system that rewards socially good actions, such as donating, sharing and volunteering.

Where did the idea for Social Good Network come from?

I had the good fortune of meeting my co-founder and partner, Antonia “Toni” Chappell, for coffee one serendipitous day—and two kindred spirits connected with a common goal to make money and do good. We both “spitball” ideas around on how to do this, but I’d have to say that Toni is the extremely innovative one. Our creative talents mesh well and my lifelong commitment to causes provides us with connections and insights into our key target markets.

I get up at 5:00 a.m. and go to the YMCA for a workout. Then it’s straight to work, where I try to acquire members and customers for our services, meet with nonprofits, and pitch our story to prospective investors. Then I head home for dinner, and since it’s summer, I pull a few weeds in my yard and take a walk before bedtime.

We don’t spend a ton of time dithering. We come up with the idea, quickly test it, research the market, and then go for it. Our ideas principally come to life in the digital realm; through creativity, design and a good programmer, you can truly change the world.

The power that’s been given to individuals via social sharing online. Consumers, voters, donors and people in general now have the power and the ability to influence nearly everything. Institutions, from brands to governments to nonprofits, now have to be more responsive to people to earn their trust, dollars and attention—and institutions have to use technology to do so on a person-by-person basis.

I don’t think of it in terms of “the worst.” I’ve had a lot of jobs over the last 50+ years, and each of them has been really good for me. In addition to being an entrepreneur, I’ve been a river guide, a deckhand on a towboat, a field laborer, a janitor, a factory worker—and in professional management at a large, public company. These positions taught me to be flexible and resilient. They also taught me that there is honor and reward in hard work, and that a long-view shaped by fast, decisive action is best. Of course, there have been unsavory elements, for sure (from cleaning up vomit to working and bunking with sociopaths in close-living quarters), but they all generally help me to keep most of my work life—from the highs to the lows—in perspective.

Not a damn thing. I look at the actual scars on my body and love each one, including the broken Coke bottle scar on my leg and my reconstructed nose from the ill-fated fight with a cowboy in a the parking lot of a bar. I feel the same way about the multitude of experiential mistakes I’ve made.

I seek out change and embrace it as much as I possibly can, whether that involves taking a different route home from work each day or trying something different on a menu. It carries over into work—being proactive rather than reactive.

Age. I’m 53 years old, and some investors have recently told me that I’m too old to be doing what I’m doing with a startup. I can’t change my age, but I can work hard as hell to change their perspective by being a success.

It’s not a specific business idea, but rather a category. I’d invent an experience-based business that caters to active lifestyle Baby Boomers. There’s a lot of money to be had there.

I’d try to suck some of the venom out of the world. I’d go about it by helping others, listening, sharing, and smiling—one person at a time.

I once was a model for a photo shoot out in the Idaho desert, wearing only an accordion.

Well, since this is about entrepreneurs, I’d say take your nose out of business books, try on a little fiction, and put your imagination to work. That’s really an entrepreneur’s best gift—imagination. The ability to dream and create. Right now I’m reading The Tiger’s Wife by Tea Obreht. It’s a beautiful narrative that intertwines magical realism with historical conflict in the Balkans.

I laugh out loud every day, or at least chuckle. But for the 4th of July fireworks in Butte, Montana, I alternately shook my head in wonderment and laughed out loud—not at the organized fireworks, which were pretty cool, but at the informal war zone fireworks shot off by the citizenry. In a town that’s equal parts hazardous waste site and mining ghost town, they still know how to do up their explosives.

If you could turn your online purchases into a donation for your favorite cause at no additional cost, why wouldn’t you?

Why aren’t you floating on a wilderness river right now?