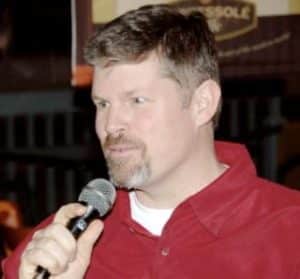 Thubten grew up in Malibu, California in the 1970s surrounded by  celebrities. His classmates included Charlie Sheen, Chris Penn, Rob Lowe, Dean Cain, Robert Downy, Jr., Holly Robinson Peete and Griffin  O’Neal.  He once wanted to become a movie star, just as his classmates  were, but eventually decided to leave LA “at the top of his career,” following his appearance in a scene with Ken Olin on the TV show  Thirty Something in May of 1990. Thubten knew that Silicon Valley held  the keys to his future.

After arriving in the promised land, Thubten worked in marketing at  Apple Computer and later at Mac World Magazine. After catching the  internet wave in 1995 Thubten supported Macintosh users for Netcom (an  early ISP), then moved on to serve as a postmaster for AOL. In 1998  Thubten founded a network engineering firm in San Jose, Samaya Inc.,  and after securing a contract with the Thai government, opened an  office in Bangkok.

Following a disagreement with the board, Thubten  left Samaya, and California, swearing off technology, (at least for a while). In 2000, Thubten founded Denver-based White Hat Technologies, a network security firm, which garnered a great deal of industry  attention. White Hat made it onto the cover of Computer World two  years in a row (2001 & 2002).  Thubten realized that what he loved about being an entrepreneur, (he’s  been starting businesses since he was in elementary school), was the  marketing, communicating the value of the product or service so that  the sale virtually makes itself. Armed with this realization he  ventured into the world of consulting. To build his consulting  business he began to explore online methods that would leverage his  efforts. One of the early adopters on LinkedIn, Thubten began to attract  attention as a super-networker. His direct connections on LinkedIn  have reached nearly 20,000, and he has remained in the top 100  best-connected people for several years. Thubten also caught the  Twitter wave early, learning everything there was to know about how  the new micro-blogging service could best be used to reach out to  others. Thubten has continued to demonstrate his mastery of Twitter as  he approaches 60,000 followers.

Thubten moved to Oregon last summer and has been enjoying getting  settled into Southeast Portland. Since moving to Oregon Thubten has  continued his work with entrepreneurs, mentoring them in  entrepreneurship and social media, and assisting them with  bootstrapping their companies and with attracting investment capital.  Thubten is active with the Angel Capital Summit as well as Startup  Weekend. In addition to managing his own social media consultancy,  Thubten serves as CMO for two social media startup companies, Business 3.0 and CluePad.  As if there were any spare moments in his week, Thubten Comerford enjoys the  local Portland cafe culture, as well as the raw/vegan food scene. He  writes for his own blogs, and is presently putting together a blog focused on Portland startups. Find his profile on LinkedIn.

I’m building my social media consultancy, Social Potency, which has  been my full-time “job” since moving to Portland. I’ve also been  contributing my social media and marketing expertise to two technology  startup  companies, Business 3.0 and CluePad. Keeping up with my blogging can  be a challenge, too, but I love it. I have two Meetup groups in  Portland, one for entrepreneurs called Startup Founders, and a Twitter  group called PDX TUG (Portland Twitter Users Group). I also volunteer  as a facilitator and mentor for @StartupWeekend events around the country.

1) People are starting to understand the power of social media, of  authentic communication,

2) The trend toward entrepreneurial business continues to grow,

3) Portland gets weirder by the day. 😉

I am someone who can’t let a good idea just sit around. If I hear a good idea, my mind takes it to the nth degree in every possible  direction. I do the same with my own ideas. I share the ideas with  others over coffee, skype, email, etc. until they land with people who  can and will run with them.

I once took a consulting client who was not a close fit for my skill  set because I felt for the client’s situation and wanted to be  helpful. Although I explained at the outset that the project was not  my forte, the client expected perfection, and ended up becoming a  nightmare, and now former client. The lesson that I learned is that  regardless of how much you want to help, if the project is not a fit,  don’t take the job.

I give this business model away all the time: take something that you  love to do; create a DVD that shows others how to do it; market the  DVD on a blog site. I once met someone at a networking event who was a  house painter. It was winter, and he was not painting any houses  at the time. He asked me what I would suggest for him to do to make  some money in his off season. I suggested this exact model, as it  would provide income throughout the year, and it wouldn’t cost him  much to shoot the video and produce and mail the DVDs. He no longer  has to paint houses for a living. 🙂

What’s most important to remember when marketing through social media?

3) Provide value, up front, for  free,

5) Communicate WITH (not at) your  audience,

6) Entice them to engage you on and through your blog/web site.

What’s the most important aspect of your life?

What’s most important  to me is that I make a positive difference in the world, that the  profits from any of my business endeavors go to heal the sick, feed  the hungry, house the homeless, and make the world a better place for  all of us to live. Continuing to give that idea away brings about a world that works for everyone, with no one left out, sooner and sooner  every time it’s shared.

Thubten Comerford on Linked In