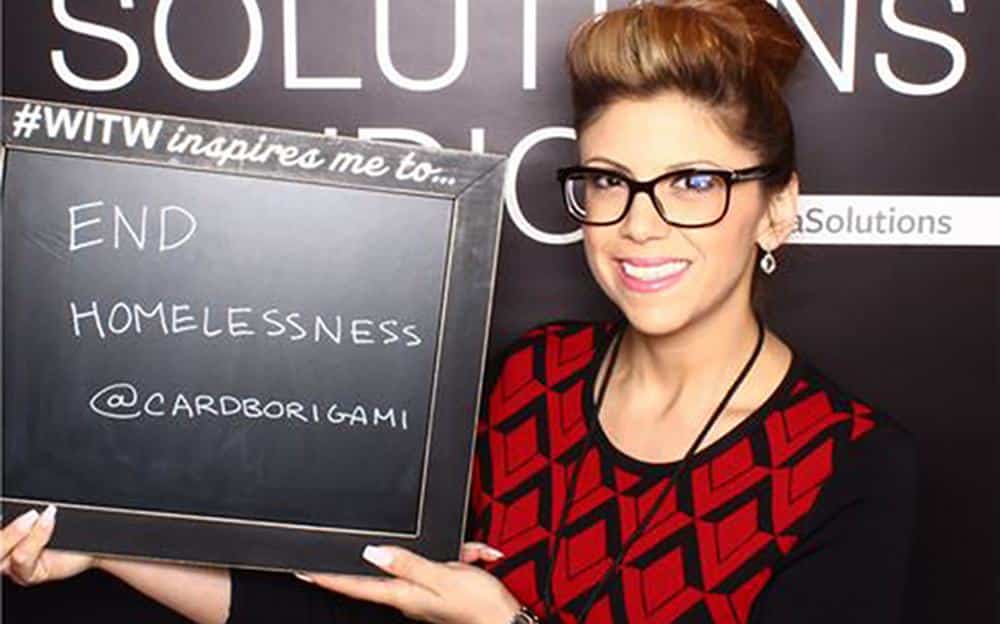 Tina Hovsepian, a designer and philanthropist, graduated from the University of Southern California with her Bachelors of Architecture in 2009. Born and raised in Los Angeles, Tina always had a consuming interest in humanitarian causes, especially the plight of the homeless on Downtown’s infamous Skid Row. During her time at USC she had the opportunity to synthesize this interest with her architectural studies. In 2007 she designed and built a prototype of a temporary shelter made of folded cardboard, Cardborigami. Since then, Tina has successfully launched a non-profit with the shelter product as a centerfold and raised over $1.3 million in funds and in-kind services.

Cardborigami, Inc. continues to receive overwhelmingly positive feedback for its innovation and ingenuity in the realm of social entrepreneurship. Recently, Tina was honored as a 2015 Mother of Invention by Toyota, which included their Driving Solutions grant. Tina also had the opportunity to present her invention at media mogul Tina Brown’s annual Women in the World Summit, which convenes extraordinary leaders, inspirational activists, and political change-makers who share their stories and offer solutions to build a better life for girls and women.

Cardborigami’s current efforts are focused on disaster preparedness and relief. Tina believes that design fundamentally impacts the daily life of our society. Architects are armed with aggressively creative ideas and new approaches to old problems. With more designers focusing their talent on socially responsible design, the world would be a better place.

Where did the idea for Cardborigami come from?

Cardborigami originated from the Buddhist philosophy that we are all interconnected and we all have the potential to be happy and help others. After studying abroad all over Southeast Asia, I returned to LA, my hometown, to realize that we are the homeless capital of the USA. I thought this was unacceptable and so I designed Cardborigami as an alternative to transitional shelters.

I currently work at an architectural firm where I design a variety of different projects all over the world. Meanwhile, I spend my nights and weekends holding meetings, planning programs, and re-developing the design of Cardborigami’s products and mission.

An idea is not tangible. Once you make it into a tangible form it breathes life. For example, simply jot it down, tell someone else about it, or build it!

I find the awareness that homelessness is not something that we should stigmatize any longer exciting. I have seen so many more housing going up for the homeless, money being promised to the cause, and more innovative programs are in the works in LA and other major cities.

Chanting Nam Myoho Renge Kyo. This is the essence of the Lotus Sutra which is the teaching that Nichiren Buddhism is based on. This helps me focus and energizes me to do what needs to be done in the most efficient manner! It essentially translates to, “I devote myself to the mystic law of cause and effect through sound.”

I do not think I had a worst job. Every job, good or bad, has offered me a new perspective and educational opportunity. I am lucky to have all the experiences as an employer as possible, this helps to inform my decisions as a leader within my own company.

I would have liked to be less impatient. I have now learned that all good things take time. Cardborigami was incorporated in 2010 but the idea was brought to fruition in 2007. Sometimes I used to feel that growth of the organization was too slow. However, my personal growth has been complimentary and just as important!

Take every opportunity seriously and give 100% no matter how insignificant it may seem. Sometimes the most amazing projects can emerge after a quick phone call from a stranger.

Recently Nepal was hit with a massive earthquake, as we all may recall. Cardborigami was contacted multiple times with requests for shelters. We did not have enough ready for this need. I felt that this was a huge failure, people were living on the streets when they could have had my design protecting them! I overcame this by moving faster than ever to mobilize manufacturers and mass produce shelters that would be ready to deploy. Also, I decided to take my team to Nepal and see how we could physically help rebuild on the ground. It was the most amazing experience of my life and now Cardborigami will have new programs to help called #covernepal. I truly believe failure leads to greater success and happiness if you can learn and grow towards the future.

Someone please build an innovation lab. This would be a huge warehouse full of 3d printers and other new technology where inventors can go and test their ideas in real time. Essentially pooled resources for research and development for individuals or companies that cannot afford their own innovation lab!

Dinner with the Vice President of the American Nepal Society of CA. We shared stories about Nepal and laughed a lot. Most importantly, we are planning fund raisers to help our new programs be a success. We will be rebuilding many schools that crumbled during the quakes in remote villages of Nepal.

I love Bluebeam. It is like Adobe Suite and Auto CAD combined, an architect’s dream! I can make or edit anything.

Fast Forward: How Women Can Achieve Power and Purpose. This is such an inspiring book full of experiences and statistics about how the success of women as leaders creates a more successful economy, business, community, and world!

Dr. Daisaku Ikeda. He is a Buddhist leader, peacebuilder, a prolific writer, poet, educator and founder of a number of cultural, educational and peace research institutions around the world. He has met and dialogues with numerous world leaders and single handedly reduced tensions between China and (then) USSR during the Cold War. He has received the most number of honorary doctorates from universities all over the world. Dr. Ikeda is my personal mentor in life and he writes encouragement daily through his ongoing series of novels documenting the history of his organization, the Soka Gakkai International – promoting peace, culture, and education through the Buddhist philosophy of the Lotus Sutra.