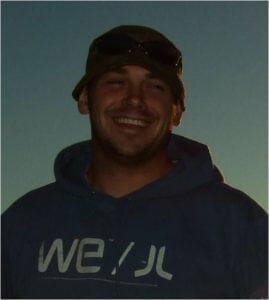 Before co-partnering the cutting edge expedition company, Secret Compass, Tom Bodkin spent 6 years as an Officer in The Parachute Regiment.  During his Army career, Tom worked in Africa on multiple occasions.  He also worked in the humid rain forests of Brunei and is a qualified Jungle Warfare Instructor.  Tom saw active service in Afghanistan in 2008 and 2010, where he specialized in working alongside Afghan security forces.  Tom has also worked leading projects and expeditions for a British company across southern and eastern Africa, developing a real passion for the continent. Previously, he had travelled and worked extensively in southern Africa and south east Asia, conducting charity work in schools and travelling independently though bush, mountain, desert and jungle.  Tom is also a Mountain Leader, Mountain Bike Leader and qualified in Wilderness

First Aid and is passionate about snowboarding, wakeboarding, surfing and mountain biking, in addition to travelling through the world’s wild places.

We are really excited about our upcoming exploratory expeditions to remote and interesting parts of the world. This year we are following in the footsteps of a 19th century explorer to the source of the river Oxus in the Wakhan Corridor, Afghanistan, cave diving in Mexico looking at the ancient Mayan civilisation and pioneering an expedition into the world’s newest country, South Sudan, to see a huge game migration that was believed to be extinct.

People are increasingly looking for something extra in life and travel, becoming bolder. The spread of the internet is making it easier to reach out and communicate with remote regions and people, increasing opportunity and people are increasingly environmentaly aware and want to travel in a responsible, sustainable manner, even if the cost is higher.

Unfortunately it is all about hard work!  We research so many ideas and only a few we rate as of the quality to take forward, then the regions we go to mean that the organisation is extremely difficult. We do it because we love the places we travel to, not because it makes commercial sense!

For me I like to have a purpose to adventure, rather than wandering aimlessly. This gives you something to focus on and a sense of achievement.  We reflect this with Secret Compass expeditions; attempting to get to the source of the Oxus is a great example.  The other aspects add colour on the way – the interaction with other cultures, stunning vistas and the relationships with other people you are travelling with. At Secret Compass we also think it is also important to engage with the history and politics of the place, to put the people and place in its proper context.

Not having a strong commercial background, we were naïve in respect to marketing and selling, I have learnt this is the lifeblood of business.

Take an idea and go do it.  It is hard to take that initial step, have the courage to follow through.  A lot of people look at our ideas and say “you can’t do that”.  We say, yes you can.

What is one book that you’d recommend to our community and why?

Eastern Approaches by Fitzroy Maclean.  Classic understated British adventurer, will inspire you to go and do what you want no matter what the barriers are.  He pioneered travel through Stalinist Russia in the 1930’s, fought with the SAS in the western desert and was Churchill’s personal envoy to Tito in Yugoslavia, working in occupied territory for 2 years.

What is one piece of software that helps you bring ideas to life?

Skype – international communication has been revolutionized.

It is hard to beat the stunning, open landscapes of southern Africa, the huge sense of scale, wilderness and the complete lack of permanent human footprint on the landscape in so many areas. South Sudan reflects this completely, being so remote. Combine this with extreme wildlife, great people and you start to understand why the continent gets under so many people’s skin.

The pioneers of the 19th century inspire me, the Brits on the Northwest frontier in India did some amazing stuff, check out Peter Hopkirk’s “The Great Game” for some crazy stories.  They were definitely a major inspiration for our outlook on life, as well as our trip to the source of the Oxus, Afghanistan.