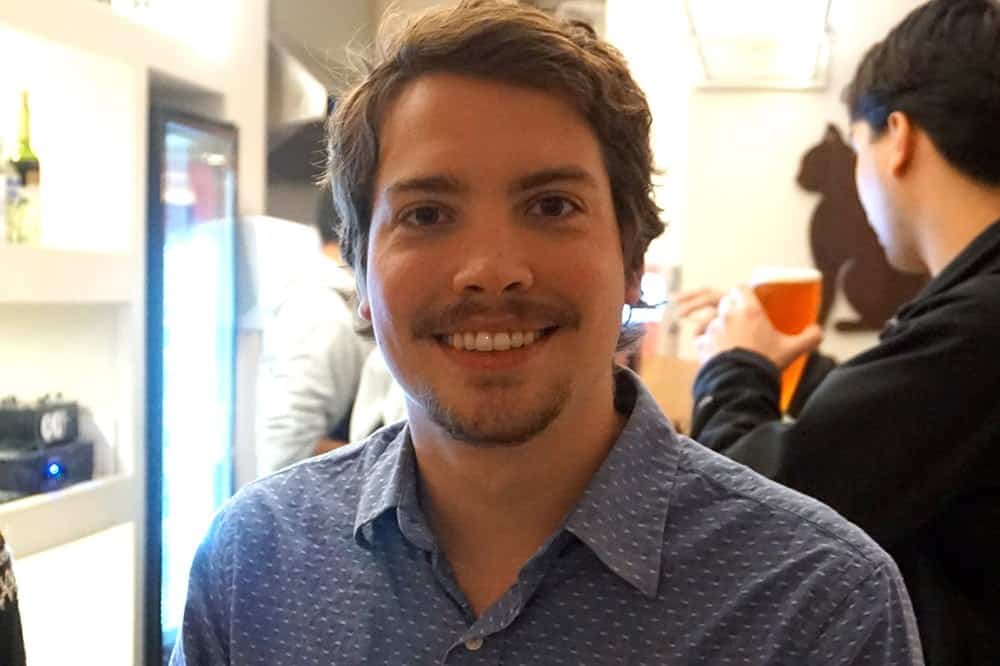 Alex Cartmell, 24, is the co-founder and CTO of HopPlotter, an app that helps people discover and visit craft breweries.

After graduating from the University of Washington with a degree in Computer Science and Applied Mathematics, he spent two years working as a software developer at Expedia, Inc. in Seattle before leaving his job to work on HopPlotter full-time.

Born and raised in Seattle, Alex has spent the last six months living in Madrid, Spain with his girlfriend and fellow HopPlotter co-founder Ann Layman. He continues to develop HopPlotter remotely from their new home.

Where did the idea for HopPlotter come from?

The past few years have seen a huge increase in craft breweries, in the U.S. and all over the world. Like many fellow Seattleites, I was hooked on craft beer from the first time I tried an IPA. I knew that tons of my favorite beers were made right in Seattle, but for a while I was doing most of my beer tasting in bars or at home. When I finally got around to visiting some local breweries I was blown away; you can get so much more variety, straight from the source, for less money than it costs at stores and bars. It seemed obvious once I figured it out, but still it seemed like so many people I knew were making the same mistake I was. There are dozens of breweries open to the public in Seattle, but for a long time I only knew about a handful of them. I started building HopPlotter, along with co-founders Lauren Cartmell and Ann Layman, in order to help show people how many great breweries are right in their back yards.

I usually wake up around 7:00 and spend a half hour or so answering emails. I’ll eat a quick breakfast, get dressed and then try to get out of the house by 8:30. Most days I walk to this awesome co-working space that Google set up called Campus Madrid. It’s basically a free space with fast internet and good coffee for entrepreneurs to work out of. I get myself into the zone and work for 3 or 4 hours straight, usually coding. Then I take a little break, head home, make lunch, go for a run. I’ll work for another few hours in the afternoon but I try to be done for the day by the time my girlfriend gets home from her job at 7:00 PM. I think a lot of people get really burnt out trying to spend 100% of their time working on their startup, and while that can get fast results for a while, I think it’s a lot more effective to keep your life balanced so that you can start each day refreshed and well-rested.

We keep lists going of any ideas that members of our team come up with, or that users suggest. Once a week we’ll meet as a team and go over any new ideas. The main things we consider are how much demand there will be for the feature and how long it will take to produce. We prototype the ideas that we think are worth investigating further, and if we all still agree that it’s worth developing, we get it built and released as soon as we can.

I mentioned a co-working space I like to work at, Campus Madrid, earlier. There are probably 50 other spaces like that all over the city; places that offer entrepreneurs a cheap (or free) place to work at, share ideas with each other, ask questions, and socialize. I would expect these kinds of places to exist in Seattle, or San Francisco, or New York, but moving to Spain and seeing that there’s just as much energy and focus on new ideas over here as there is in the States is really exciting to me. There are so many people creating amazing products all over the world, it’s a really exciting time to be alive and a part of it.

Most of my job is writing code. So even though I have other responsibilities, like replying to emails, managing releases, etc., I try to spend at least 5 or 6 hours a day on pure code-writing. As in, I basically have a clock running when I’m coding, and I stop the clock anytime I break for anything, even answering an email. This helps guarantee that even if I’m bogged down with other work, product development won’t slow down.

I worked at Target one summer in college, folding towels and stocking shelves. I remember there was a TV in the break room, and whoever was in charge of it just played one disc from one season of Friends on repeat, for the entire summer, despite the massive DVD selection available for purchase downstairs. Anyways, I learned the perfect way to fold a towel, and still fold them that way now.

When we created HopPlotter, we built the web app first, then started focusing on native mobile apps. For our product, both sides are important; the web app is better for doing a lot of brewery research and planning a trip, and the mobile app is better for when you’re already out and about. I don’t necessarily think we made the wrong choice by not building our native apps first, but we definitely didn’t spend as much time as we should have making that decision. It takes a long time to build out either platform, so it’s really important to determine early on what your main audience is and what there will be more demand for.

Build products that you are passionate about. Build products that you want to use yourself, or at least that someone close to you would want to use. We started building HopPlotter because we wanted that tool for ourselves and couldn’t find it anywhere on the internet. Nothing makes your work feel more rewarding and worthwhile than having a reason to use your own app on a regular basis.

If you are really serious about an idea, go all in. You can try to balance a 9-5 and your side project, but it’s going to take a lot longer to get off the ground and it will be a lot harder to stay motivated. Coming home from working all day at my 9-5 job often left me tired and l found that weekends were the best time to devote myself to my startup. This creates a problem though because people still need free time in their lives to have fun. Now that I am working on HopPlotter full-time I can be extremely productive throughout the week and still have time for myself on weekends without feeling guilty about falling behind on development.

I consider any bug that makes it to the production application a failure. Fixing bugs is always a higher priority than any feature work for me. We really care about building a quality product, and no matter how many cool features an app has, it should never be considered “quality” if it doesn’t work the way it’s supposed to.

I recently moved from the United States to Spain, and the visa application process was pretty unpleasant. I ended up reading a lot of blog posts written by people who had gone through the same process, as they were much more clear, detailed and helpful than the official government documentation. It would be great if there was some central tool where people could share their experiences and advice or ask questions about obtaining visas or other government documents.

Flights from Madrid to Belgium for next month. Travel is really important to me and it’s been incredible living in Europe for the last few months, being able to do so much traveling without having to spend much money at all.

The two main tools we use as a team are Freedcamp, for project management, and Slack, for team communication. The best part about both apps, of course, is that they are free. Freedcamp is really important to me especially for keeping track of our backlog and priorities, and making time/effort estimates. They’ve also been great about letting us try any paid features for a few weeks to decide whether they’re worth it for us. As for Slack, the best part of it in my opinion is that I’m not constantly filling up my email inbox with team emails that I have to painfully go back and sort through if I need information later. It does a great job of keeping communications organized.

I’m reading O’Reilly’s “JavaScript: The Definitive Guide” cover to cover right now. I highly recommend it for any serious web developers. It seems like every week there’s a new JavaScript library or framework that becomes the “hot new thing everyone should be using.” I think it’s really important now more than ever to take a step back and really understand the core language underneath it all. I made a lot of mistakes early on in my web code that I’ve had to spend time going back and re-writing to make it more efficient and bug-free now that I have such a better grasp on the language.

A former professor of mine, Marty Stepp, has been really influential to me. He taught the first computer programming course I ever took at the University of Washington, and his enthusiasm and care as a professor really contributed to my interest in coding. I went on to take a few more courses taught by him, and I can truly say that he formed the basis of everything I know about software development. I’m still friends with him on Facebook and listen to his podcast that he releases every few weeks, and I always find his opinions on all things technology to be very interesting and thought-provoking.