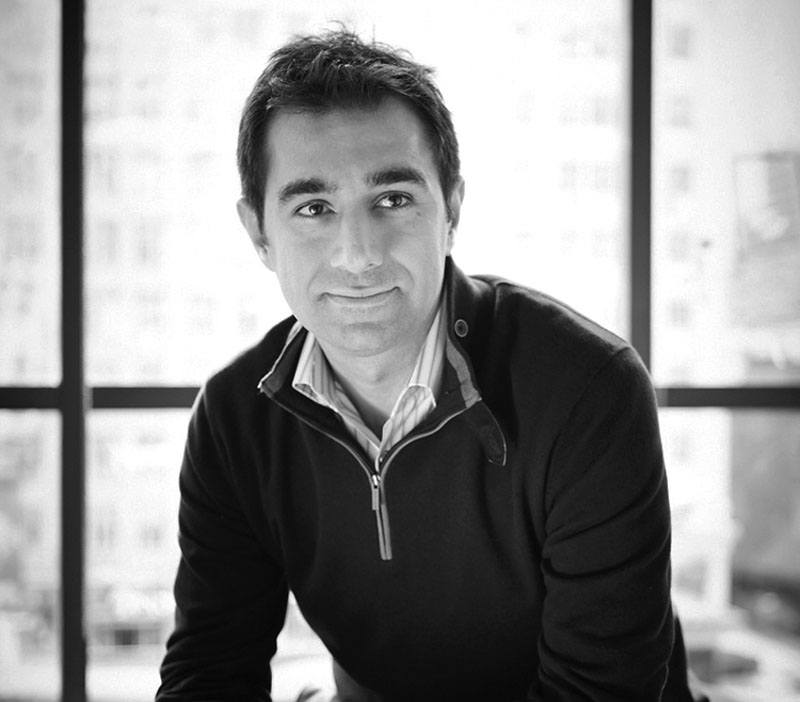 I try to think as abstractly as possible without worrying about technology restrictions. I like to think about it, dream about it, and position myself as the end user rather than the designer.”

Dr. Hossein Rahnama is the founder and chief product officer at Flybits, a context-as-a-service solution that provides instant cloud access to everything needed to build highly personalized mobile experiences. He is also the director of research and innovation at Ryerson University’s DMZ, a professor at the Ryerson RTA School of Media, and a visiting scholar at MIT Media Lab.

Hossein‘s research explores artificial intelligence, mobile human-computer interaction, and the effective design of contextual services. He has more than 22 publications and patents on ubiquitous and pervasive computing. In August 2012, he was recognized by MIT Technology Review as one of the world’s top 35 innovators under the age of 35. He has a doctorate in computer science from Ryerson University.

Where did the idea for Flybits come from?

I was doing my graduate studies with my key area of focus in mobile computing. Believe it or not, the first project I worked on was a mobile dating platform so people could use their Nokia phones to find dates at the university. That became a part of a larger project, and I ended up building algorithms that could behave differently based on where people were using the application. For example, if you brought your phone to class, you could find a match to help you with an assignment. You could take the same app to the bar across the street, and the matchmaking logic would change. The idea that your mobile phone could behave differently based on your situation and preference became a key foundation of Flybits.

In 2007, I joined a European-funded research project that was doing something similar, so I went overseas to get involved and spent a few years there. It enabled me to advance the algorithm I had built. I returned to Canada, finished my doctoral studies, and spun off my research into a company called Flybits.

“Flybits” is actually referring to the technical term “bits” — zeros and ones — that can fly. So it’s a combination of the wireless aspect of computing and the binary bits.

Everyone complains about dealing with email, so I try to allocate three times during the day to get rid of emails. I deal with email in the morning before taking the train to work, once around noon, and again in the late afternoon. The rest of my day is spent in the lab with team members in product and engineering. I also spend time talking to our CEO and colleagues from both the West Coast and Europe. Being central allows me to communicate effectively with two distinct time zones; I can take calls with Europe in the morning, clear up emails, and then wrap up the day with calls from the West Coast.

I think it’s always good to follow a top-down approach when coming up with ideas. I try to think as abstractly as possible without worrying about technology restrictions. I like to think about it, dream about it, and position myself as the end user rather than the designer. After that, my research training helps me turn it into modules and smaller components before building it up to the next level.

In graduate school, especially in engineering, we were usually trained to follow a bottom-up approach to build or improve a system. But a top-down approach bends the paradox of academia and entrepreneurship. Great startups can combine entrepreneurship with research disciplines to come up with ideas that have the highest possible impact.

I think the ability to tell a story, to think top-down, and to break things down into pieces really helps bring ideas to life, and I’ve seen some great entrepreneurs doing that — Silicon Valley is full of them.

The one trend that really excites me is advanced manufacturing — the combination of electronics, software, material engineering, and manufacturing. In 10 years, we’ll see smart textiles, Internet of Things wearables, and inventions in materials that are a combination of electronics and software. But instead of making wearers look like a cyborg, they’ll be fashionable items with invisible and truly ubiquitous intelligence embedded in them.

I wish I could be even more productive, but I plan the week ahead on Sunday. I decide what will make me happy with my performance at the end of the week, and that helps me stay on track. I always try to factor in up to 30 percent of unaccounted-for time because something unexpected always pops up.

The first part-time job I had after high school was as an Internet tech support representative from late afternoon to midnight. I worked for an Internet provider taking calls to diagnose problems for residential customers.

One of the funniest things that happened was on a call I took from a lady during Windows 95 days. I began by asking her to please close all the windows. She put me on hold. When she came back to the phone, she said, “OK, I closed all the windows in my home, so what should I do now?”

I learned to be patient and a good listener, especially when dealing with a customer.

I’m proud of how we spun off the Flybits technology from our lab into a company. If I could change one thing, I would wait and act as a research group until my product were more mature and then turn it into a business. The moment you turn your research into a business, you have to worry about too many other distracting things. You have to worry about taxes, your board, sales reporting, etc. But taking a few more months — especially in an educational environment where your intellectual property is well protected — gives you more time to focus on the product itself before having to worry about the complexity of business. Universities are perfect places to build innovative products.

I talk to a few people I trust on a daily basis to gather feedback — both positive and negative — and validate my strategy. The more you share your story and show your product to others, the more helpful information you’ll get. This is a double-edged sword; you need a good filtering mechanism to listen to the helpful feedback and ignore the useless feedback. It’s important to remember that it won’t all be positive, so welcome and use the negative as well.

From day one, my strategy was to build locally but have global ambitions. In the past, it might have worked to capture the regional market before expanding. But innovation moves at such a fast pace now that you have to think globally even when you’re just a company of a few people.

We leveraged Toronto to build our product, used Europe as a test market to validate and mature our technology, and then expanded into the U.S. as a key target market. I think that strategy worked very well for us. Even while the company was in its early stages, we managed to bring in some large international investors because we understood the global market even in our early days. We didn’t just build the product for the Canadian market or the Silicon Valley market; we built it with global relevance in mind.

Every entrepreneur has many failures; the art is to learn from them quickly. I learned immediately that team-building is very important. You have to pay attention, and if something isn’t working, fix it right away. It’s much better to make a quick decision — no matter how difficult — than to let it go for a while.

Sequoia Capital has a theory that the DNA of a company is formed within the first three months of the company’s inception. If you don’t build the right DNA for the company early on, it’s going to be extremely difficult to correct. As one of my mentors has always said, “Let the flowers grow, and get rid of the weeds right away.”

I would love to see a startup work on intergenerational social networks. Imagine a platform that allows different generations of individuals to learn from one another. Using digital footprints and machine learning, you could match a 20-year-old with a 60-year-old with similar attributes and enable them to follow each other. This way, the younger person can learn from the mistakes and achievements of the older person. By leveraging de-identified DNA data, this social network could encourage many healthy habits across generations.

I use Textastic, Evernote, Keynote, and Proto.io on a daily basis. But one tool for Mac that I really love and have been using for more than a decade is Automator. It basically allows me to create custom workflows based on my existing apps and services. This is especially useful for repetitive tasks. Let’s say I want to be notified when someone messages me while I’m driving. I can use Automator to build one workflow that does that for me in just a few clicks.

I recently finished reading “The Hard Thing About Hard Things” .com/) by Ben Horowitz. It’s about the challenges he faced building startups and crashing them. It’s a great read for entrepreneurs.

In my class, I use a more academic book called “Disciplined Entrepreneurship” (http://disciplinedentrepreneurship.com/) by Bill Aulet. It provides 24 steps for entrepreneurs to follow to build a sustainable business.

“Grown Up Digital” grown-digital/) by Don Tapscott is another good one. He’s a Canadian author who has done a good job explaining how Millennials are different from their parents’ generation in their use of technology.

Of course, I was influenced by my parents. My dad was a computer engineer who worked for Control Data Corporation in the 1970s and was an entrepreneur, so I naturally learned a lot from him.

I learned many of my leadership lessons from Sheldon Levy, a great friend and former president of Ryerson University. He taught me that you must delegate and empower your team. Instead of building processes and rules, you build trust. He showed me that great leadership is truly about producing more young leaders rather than followers.

I also consider professor Alex “Sandy” Pentland a role model who proves that you can be an entrepreneur and a world-renowned academic simultaneously. He’s one of the top data scientists I’ve worked with, and he’s now leading the Human Dynamics Group at MIT Media Lab.